Cindy Crawford is one of the original 90’s supermodels, and her daughter Kaia Gerber is now following in her mothers footsteps. The mother-daughter duo star on the cover of Vogue Paris’ April issue. 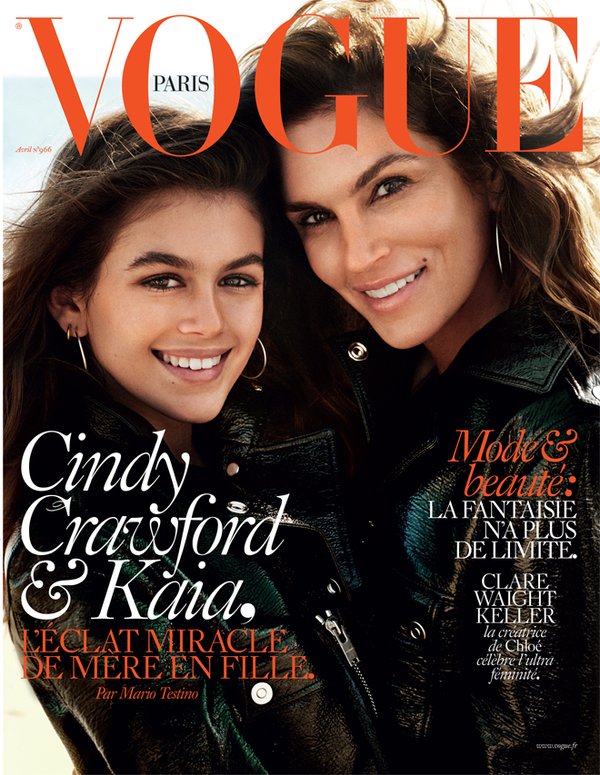 At only 14 years of age, Gerber has already made a name for herself in the modelling world. However not without the help of having the striking good looks of her mother and being a splitting image of Crawford at her age. Gerber signed to IMG last summer and her name has been on the rise ever since. Starring in editorials for Vogue and Teen Vogue and most recently in a campaign for Alexander Wang.

The cover sees the pair in a close-up portrait shot with both of their faces close to each other. It is easy to see the endless similarities between the two, most notably their bushy eyebrows and flawless smiles. Noticeably missing from Gerber is Crawford’s infamous beauty spot. Audiences are even saying that the two look more like sisters, with Crawford looking much younger than her 50 years.

The cover was shot by renowned photographer Mario Testino, capturing their striking looks beautifully. Both mother and daughter have stated that it will be their only cover shoot together, as it is important for Gerber to make a name by herself in the fashion industry.

It’s safe to say that big things can be expected from Gerber in the next coming years. To read more about supermodel Crawford, check out FIB’s Top Models Vol 60 – Supermodels.