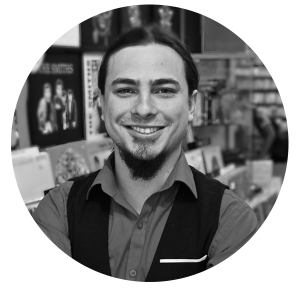 Cameron Cooper is a young writer and musician living in Sydney, Australia. Earning his bachelor’s degree in writing at Macquarie University in 2013, his work has appeared in everything from corporate publications such as HR Director and music magazines and e-zines including The Music and Heavy Music Mag. The bass player for eclectic five-piece Blacksmith, Cooper’s breadth of music knowledge extends from the grainy classic rock records on his turntable to the chiptunes on his hard-drive. He has slung T-shirts for Swedish metal acts and talked politics with Israeli death growlers. He is currently obtaining his Masters at Macquarie University in the Departments of English, and Media, Music & Cultural Studies. Pulling double duties as both a critic and player of music isn’t always an easy line to walk, and he can often be found in any number of pubs and record stores across Sydney on his endless quest to discover more music.