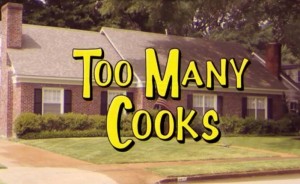 The 11-minute short sketch “Too Many Cooks” that aired on Adult Swim in late October in the US went viral through Youtube and social media channels much to the surprise of creator Chris Kelly. His surprise is warranted considering the 4 a.m. time slot.

The show parodies 1980s TV shows through the drawn-out, repetitive, irritating, almost down right disturbing credit sequence (much like this sentence).

L.A. times blogger Robert Lloyd warned potential viewers that this one requires repeated viewings, however I believe it is not the show itself but the near 4 million hits and the rave reviews of people tweeting the profundity of the sketch that have given it its true momentum. 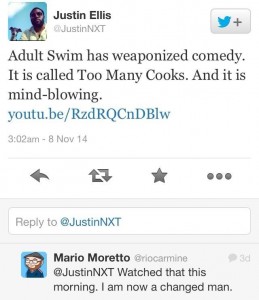 The parody that most likely was meant to be funny, relatable and perhaps a little unnerving is now suddenly being picked apart by critics and bloggers alike to find the deeper meaning.

What is interesting about “Too Many Cooks” is the way it subverts our expectations so much so it exceeded even the expectations of its creators.

We love the homely thrift shop items, the staged freeze-frame posing, the cheesy grins and everyone’s favourite machete wielding mystery man Bill, but is it art?

Llyod admits he is tempted to say so.

But really Patrick Kevin Day puts it perfectly with the most beautiful paradoxical description for “Too Many Cooks,” when he says it is an ‘essential bit of pop-culture ephemera.’

I agree. It is the pop culture of the now however we must remember the outside factors that contribute to its current and growing success, and without such factors is the show a pop culture phenomenon that is here to stay?

The problem is the ‘now’ pressure and expectation from its debut success, can its creators top their original masterpiece?

The thing is people want to be in on the joke and so they will watch “Too Many Cooks” a first, second and maybe even a third time just to get it which might explain the 3,770,391 view count.

So check out what the fuss is about.