Two years ago on the Oscars red carpet, Angelina Jolie sported a stunning Atelier Versace black velvet gown that had made her right leg famous. It was a thigh high split unlike any other and it drew attention from all around the world, in fact a Twitter account dedicated to her leg attracted more than 15,000 followers. From this revival of an old classic erupted a popular new trend in the world of celebrities and red carpets; the thigh-scraper gowns that had celebrities showing off (at least one of) their toned and tanned pins! 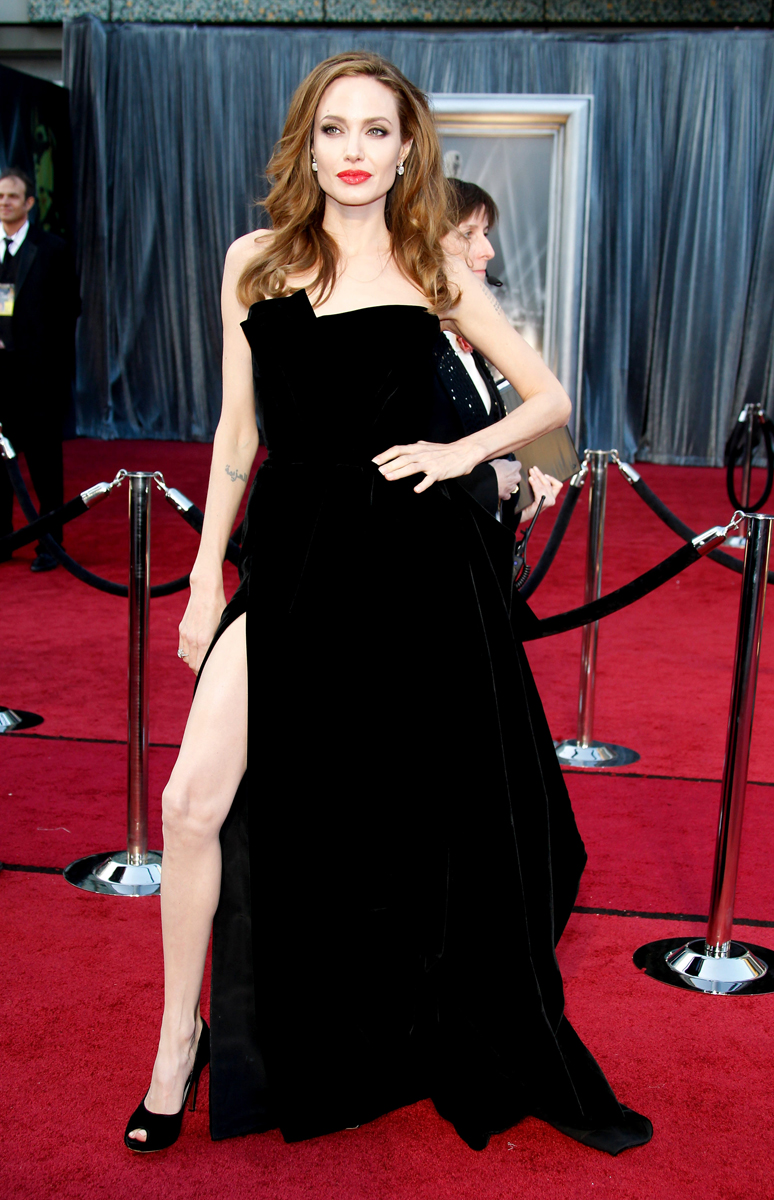 After Jolie emerged with this trend’s modern debut, it took off running as celebrities from Kendall Jenner to Jennifer Lawrence put their own spins on the classic that was revived by Angie. Two years after her big leg show and it is still a massive red carpet trend (and Angie’s right leg is still totally famous), and it seems to be working for popstars and movie stars everywhere. These stars prove that the risqué and alluring thigh high split is actually totally glamorous and elegant. Well, most of the time. Now we take a look at some of the best red carpet thigh-scrapers, both pre and post- Angie. 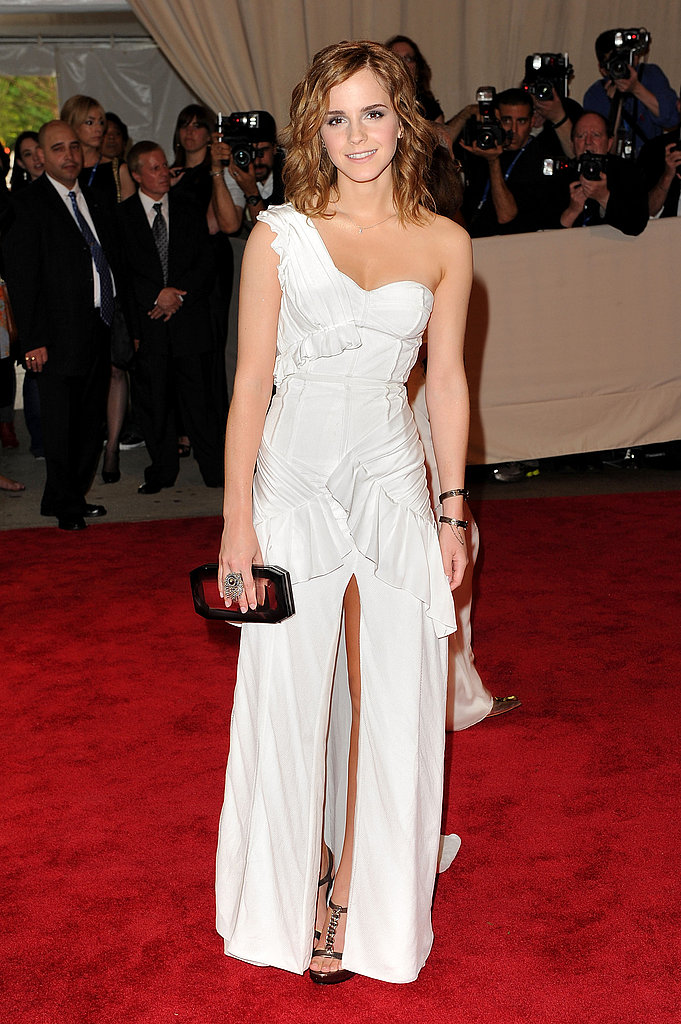 Emma Watson is yet to put a foot out of line when it comes to fashion, having just been awarded for best British Style at the 2014 British Fashion Awards. The 24 year old has come a long way from her childhood Harry Potter days, and maintains a sophisticated and elegant style icon. At the 2010 Met Costume Institute Gala in New York that was held for the “American Woman: Fashioning a National Identity” exhibition opening, Watson was absolutely striking in a white, one shoulder Burberry Gown. This of course was two years prior to Jolie’s global publicity gaining pose. Regardless of Emma lacking a pose as exaggerated as Angie’s, she radiates with class and stylish flair. 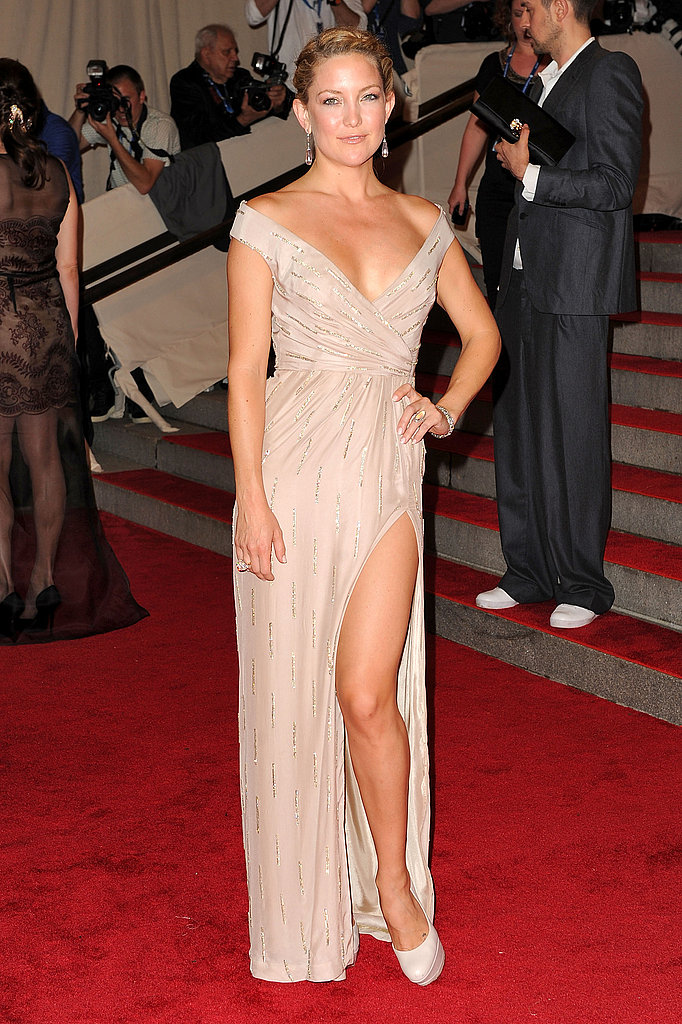 Also present on the night was Bride Wars star Kate Hudson, who looked absolutely flawless sporting a thigh high split. She wears a nude Stella McCartney gown with matching nude heels and refined accessories. This makes for a jaw-droppingly  sleek and elegant look, that Hudson owned in every way possible.

Jennifer Aniston is another style-savvy celebrity who has taken to the red carpet in a thigh-scraper gown, and even managed to do so two years before Angie’s big performance. Aniston’s black, one shoulder Valentino gown made an appearance at the 2010 Golden Globes, and was brought into the spotlight again after fashion writers found a suspiciously similar connection between the two arch enemies after Angelina’s right leg debut. Maybe Jen’s sophisticated attire and super toned legs were Angie’s inspiration? 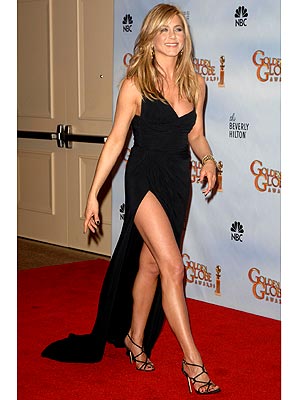 While many celebrities may have rocked the thigh high look previous to Jolie’s big night, the trend definitely got bigger, bolder and more fabulous after she brought out the big guns. 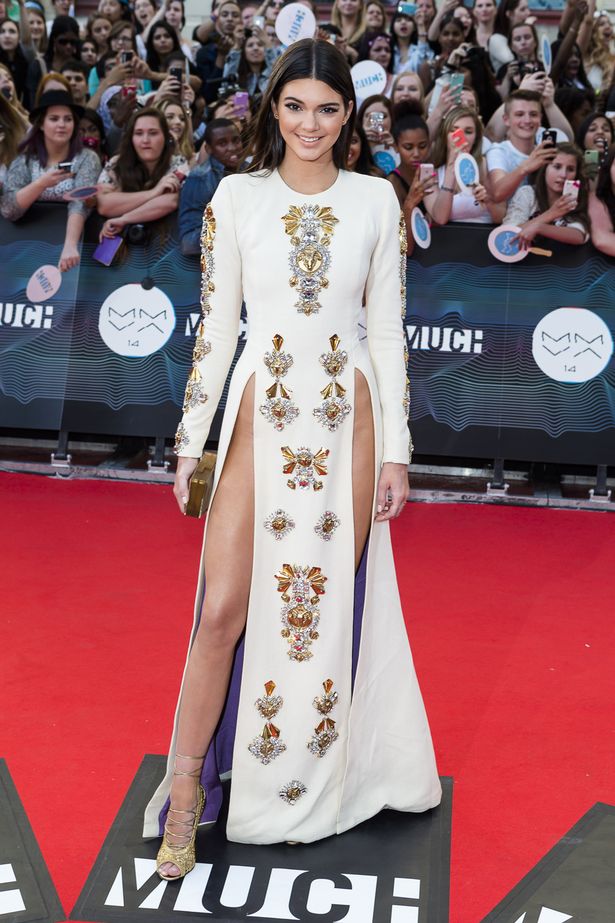 So here were are in 2014. Now we have not one but TWO splits which are just a little bit higher than well, the typical thigh-scraper. Enter young model, fashion icon and member of the infamous Kardashian family Kendall Jenner and her super daring interpretation of the glamorous and sophisticated thigh high split. Kendall wore the white Fausto Puglisi gown to  Canada’s 2014 MuchMusic Video Awards in June, baring her pelvic bones and risking what would potentially have been the most embarrassing wardrobe malfunction to date. There is no doubt that the face of Estee Lauder looked gorgeous in the sleeved gown with embellished with jewels, but many questioned whether or not those outrageously daring splits were really necessary. One thing can be sure though, the Kardashian-Jenner clan sure love to make a statement.

Despite this courageous act of bravery, most celebrities have chosen to not go down this path, and instead manage to keep a slightly more modest approach to the thigh-scraper. More modest perhaps but definitely no less glamorous.

Actress Amber Heard decided to swap her beau Johnny Depp for a different accessory on the red carpet: her leggy pins. She attended the Golden Globes earlier this year, showing off one of her legs in a navy Atelier Versace dress. Her chosen accessory may be lacking the rugged handsomeness of her fiance, but is definitely no less eye-catching. Her outfit looks stunning and glamorous, and she wears it so very well that we can’t help but envy her so much more now. 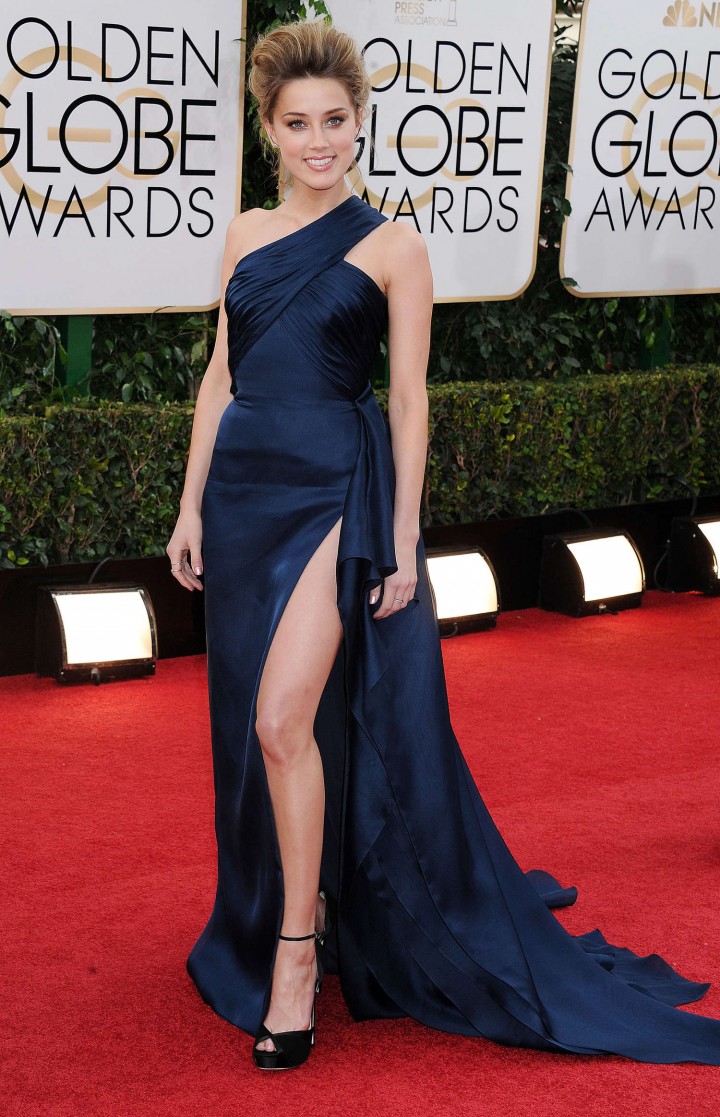 Another glamorous celebrity seen owning the thigh high split on the red carpet is actress Blake Lively. The starlet wore a burgundy Gucci number with geometric and pleated detail to the Cannes Film Festival in May this year. Lively is known for her style and this dress proves she is well deserving of it. 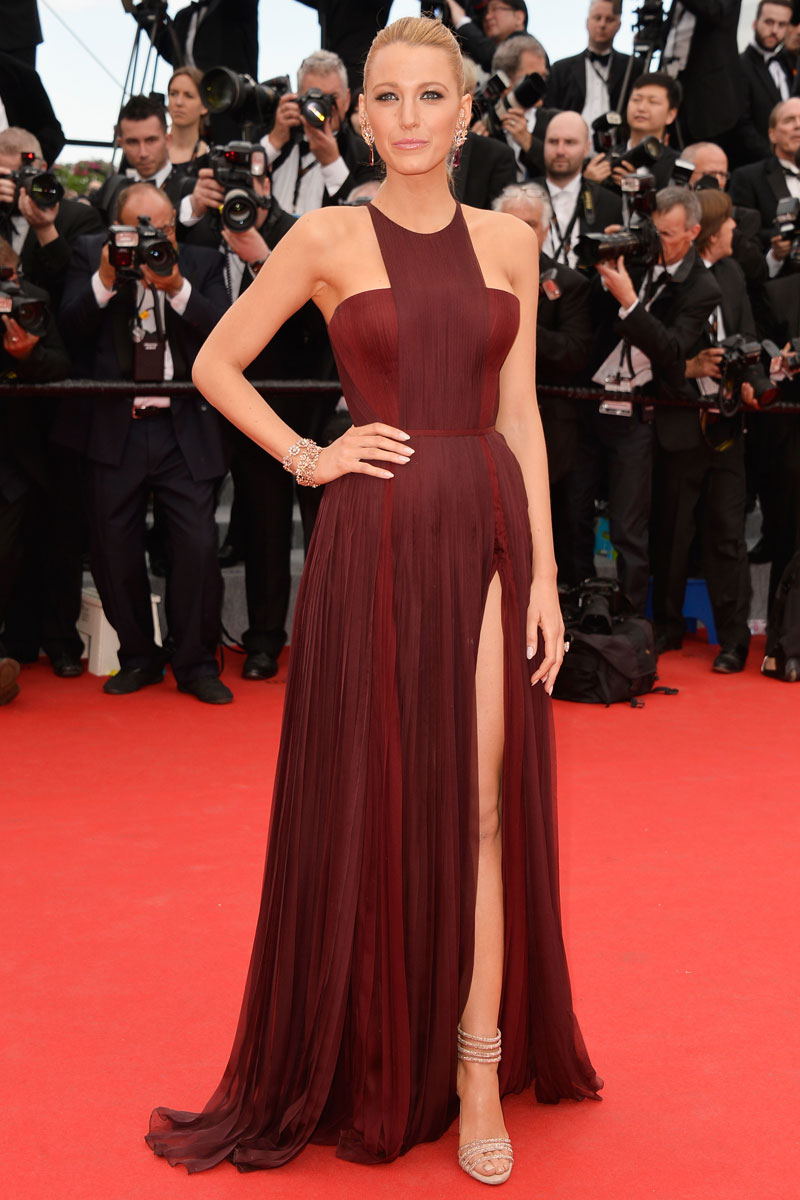 And of course, this would not be a fashion article without the mention of fashion royalty Cara Delevingne. The model has just won Best Model at the British Fashion Awards, and it was here that she donned an award-worthy Burberry gown. The gold dress had Cara showing off her model legs with an alluring thigh high split that was the perfect choice for the occasion. 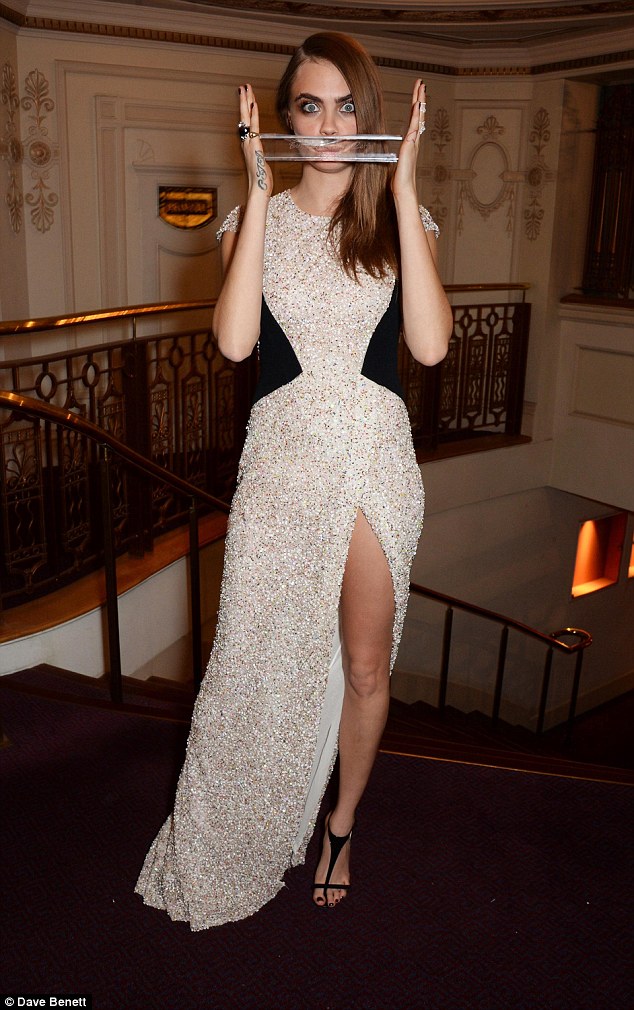 Whilst these glamour queens deserve all the mentions they can get, their show stopping leg baring antics would not have been possible (or at least anywhere near as successful) without the keen eyes of their iconic designers. Designer labels such as as Versace, Gucci, and Burberry are deservedly at the forefront of the fashion world, presenting the world with awe-inspiring masterpieces that deserve as much credit as the lucky women who get to parade these beauties down the red carpet.

So let’s all be thankful for Angie bringing back the thigh-scraper in a big way, and for the designers who made it all possible, and hope that the future brings many more to the red carpet.