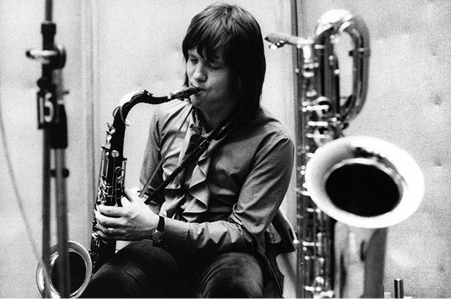 A man whose life has affected such names as Eric Clapton, Buddy Holly, Mick Jagger, John Lennon and so many more has died aged 70 this week, Tuesday 2nd 2014 after a life long-lived in the rock and roll game, he was Bobby Keys. He’ll be remembered not just by the artists he’s played with but by the millions he’s touched with his ability to bend melodies like liquid-soul into the saxophone and out onto the stage for the wider world to enjoy.

Who would have thought that by picking up a saxophone just because it was the only instrument left out of the school band at the unremarkable age of fifteen, tenor saxophonist Bobby Keys would be catapulted into the fast world of rock and roll? Well…The Rolling Stones for one. They saw in him the potential of a wide eyed screeching saxophonist, the kind only the impetuousness of youth can make, so with good judgement (which we know the fifties were all about) they snapped him up. After that the rest was history in the making.

Starting his career by playing out of garages in his hometown of Slaton, Texas, Keys made a name for himself fast not least due to the fact that he was playing alongside the likes of Buddy Holly and Bobby Vee in his first band ‘Dick Clark’s Caravan of Stars’.

“I kind of weaselled my way into the perimeter of the garage,” recalled Keys. “He [Buddy Holly] was the first guy I heard play electric guitar and it impressed the hell out of me. Rolling down the highway with Little Anthony and Little Eva and Major Lance and Billy Stewart and Freddy Canon. It was really cool. I was still a teenager. We played armories and gymnasiums and things like that. It was great training.”

In 1969 while checking out a carnival in San Antonio, Keys found himself drawn to an uncontainable ruckus from the main stage. This would be his first encounter with The Rolling Stones, the onstage antics of Mick Jagger and a man who would become his closest friend Keith Richards. A bit “ticked off” about what he saw but swayed nonetheless Keys describes that day:

“And all of a sudden here comes this truckload of English jackflies singing a Buddy Holly song! Damn! I couldn’t really hear all that well, amplifiers and PAs being what they were, but man I felt it…it reminded me so much of the energy I heard from Buddy and I heard from Elvis. There was something in there that was the real deal.”

Keys couldn’t read music, he only had an ear for it and that ear was what made his music so unique. That reliance, not on what he saw but what he felt is the mark of many a great musician. It allowed him to improvise on the spot and flow in concert with the band, going wherever the music took him.

The Rolling Stones – Can’t You Hear Me Knocking – Live

Let It Bleed was his first contribution to the band after which he would be conscripted into the band and all of their subsequent albums through to the 1973’s Goats Head Soup. It didn’t matter if Keys was blasting out solos or adding his own layer of soul to the band’s records, his swing on things became an integral part of this golden period of which he brought so much to. It was here that Bobby Keys’ and Keith Richards’ mateship was solidified. Whether it was when they realised that they shared the same birthday -December 18, 1943 or when Richards realised that Keys was as much of a rascal as himself when the irrepressible saxophonist famously decided to take a Dom Perignon bath just because he felt like it. If rock stars’ birthdays weren’t hazardous enough for anyone unlucky (or lucky) enough to be in the same vicinity as them these two would’ve made sure that there was enough party to go around for the both of them.

“He was the epitome of the rock & roll sax-playing man,” Rolling Stones guitarist says of close friend and sideman

See what his closest friend has to say about Keys’ passing in this interview.

It didn’t stop there though…Far from it. During this period the rock ‘n’ roll blues sax machine, never one to limit himself, also recorded with Elvis Presley, George Harrison and Lynyrd Skynyrd, to name a few.

He seemed to have a knack for crossing the line. From blues jazz to rock ‘n’ roll to RnB he was able to slide into every form. That ability showed through his diverse career, playing alongside John Lennon in ‘Blue Suede Shoes’, Joe Cocker’s ‘Delta Lady’, as well as with Jim Keltner, Harry Nilsson, Warren Zevon, Dan Baird, The Who, Marvin Gaye, BB King and Ringo Starr. Walking that line, however unsteadily, he was fully committed to doing, whatever the outcome.

Even with such a long list of friends and fellow conspirators, as it always has been the dark side of rock ‘n’ roll is ever consuming. He struggled with drugs and alcohol and fought through the liver affecting disease cirrhosis for most of his life but died peacefully in his home of Franklin, Tennessee, surrounded -as he had lived his life- by friends and family. Leaving a legacy not only in life but in death too, his family posted on his Facebook wall informing his fans and everyone he has moved with his music, of his passing:

‘Early this morning our beloved husband, father, family member, and friend passed away peacefully at home in Franklin, TN. Bobby was surrounded by his family and loved ones. He will be greatly missed as he touched so many lives and made a lasting contribution to the American music scene. Bobby’s horn may be silenced here on Earth, but the music he graciously shared will eternally live on. In lieu [of] flowers and gifts, the family asks that contributions be made to St Jude’s Children Research Hospital and The Humane Society in his honour.’