The UK’s largest ever exhibition of the influential and dynamic fashion photographer Guy Bourdin at Somerset house this winter, features over 100 works & exciting, previously unseen material from the photographer’s estate, from 1955 to 1987.

This major showcase will chart Bourdin’s distinguished 40 year career from Man Ray’s protégé to photography revolutionary & delve into his pursuit of perfection. The exhibited works will characterise the craftsmanship behind his images, from production through to publication & their ceaseless quality as a consequence.

If greatness is defined by the mark you leave on the world, Guy Bourdin was certainly one of the greatest fashion photographers to ever live. Irving Penn was great, Helmut Newton was pretty solid too, and Richard Avedon took photographs that were as timeless as they were beautiful. But Bourdin did something else. He made us view the female body & fashion photography like we never had before. Though undoubtedly many of these other heavy-weight photographers had a big hand to play in shaping the look of fashion photography as a genre today, none shaped it as much as  Bourdin.

Even if you’ve never seen his images before, they all look oddly familiar. A close look at his work, and side by side comparison to contemporary photographers like Mert and Marcus, Inez and Vinoodh, Terry Richardson, even Tim Walker, will reveal that they’ve all been appropriating and taking inspiration from Bourdin all along. In the words of Manolo Blahnik, Bourdin’s creative legacy is so immense, his shoes will never be filled by another.

Bourdin was one of the first photographers to initially convey complex narratives in his images than snatch a moment that was sensual, provocative, shocking, exotic, surrealistic, and sometimes sinister and simply associate it with a fashion item. 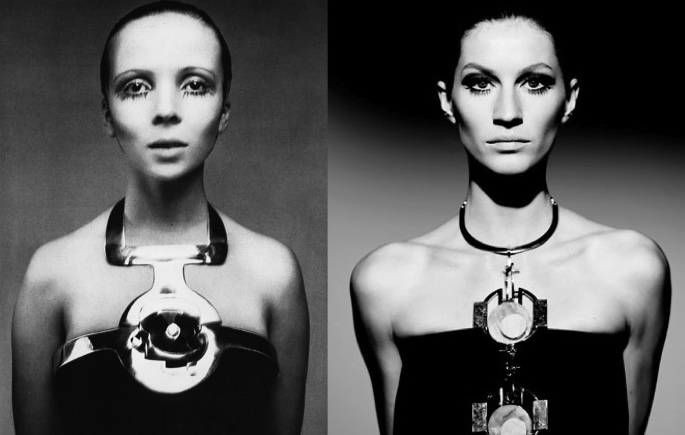 The exhibition also features a selection of paintings, working drawings, sketches and notebooks, not seen in the UK before, which inform his approach as a compositional photographer and craftsman of a particular meticulous fashion.  A highlight will be the ‘Walking Legs’ series – a campaign commissioned by Charles Jordan in 1979 exhibited in its entirety for the first time with a yet unseen accompanying fashion film.

In one image a woman lays totally naked on the floor with a Scarlett red painted stream of blood seemingly flowing from her pursued open lips. 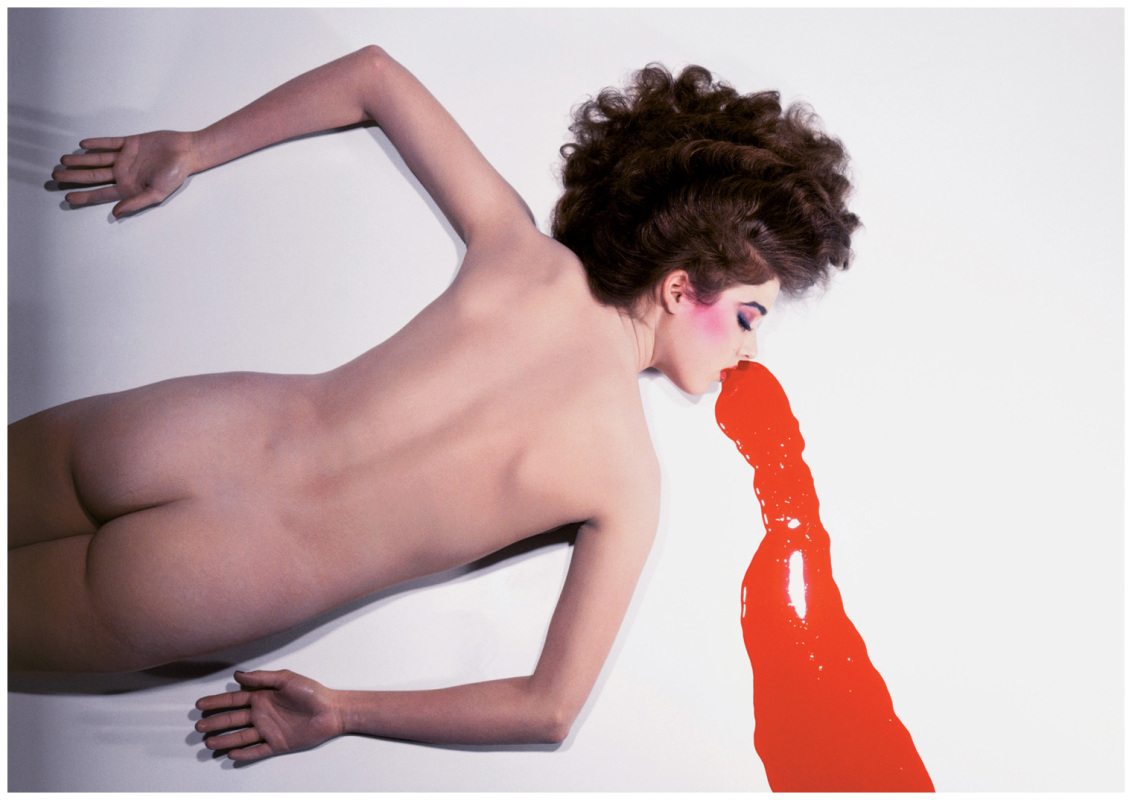 In another two women lie prone on a mound of dirt , only visible from the crotch down. Do we presume they’re dead? While the third women is in a phone box calling someone, visibly panicked. Who is she calling? Is she the perpetrator? A witness? We cant be sure. 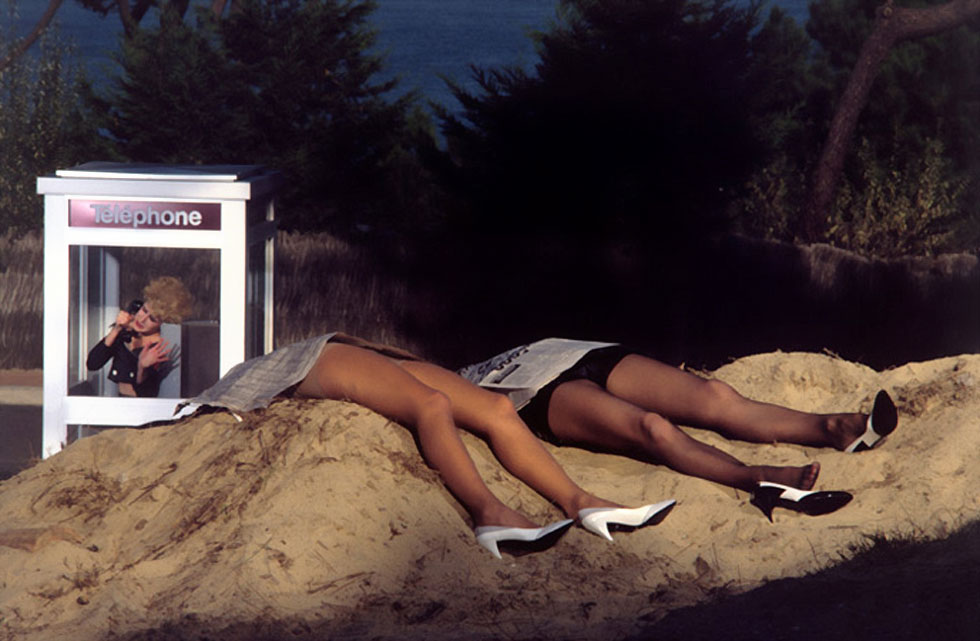 Bourdin made a short film featuring a seemingly dead naked girl who was presented face down. These are amongst his darkest themes, not only subtly hinting at murder and violence similar to the likes of Helmut Newton, but Bourdin really blatantly states it  and glamourises it.

In a subjective fashion and strictly visually, his images are powerfully compelling, beautifully composed, meticulously styled and bursting with vibrant hues and shades. But can one ever completely remove themselves emotionally from art can they? His images will always leave us feeling unsettled at the very least. He was the first fashion photographer to fetishise the human body, specifically women’s body parts, going so far as to remove the rest of the woman entirely which is prominent in most of his photographs.

A pair of perfect legs are seen walking by the sea, spread open on the sidewalk, or as stand-ins for table legs. 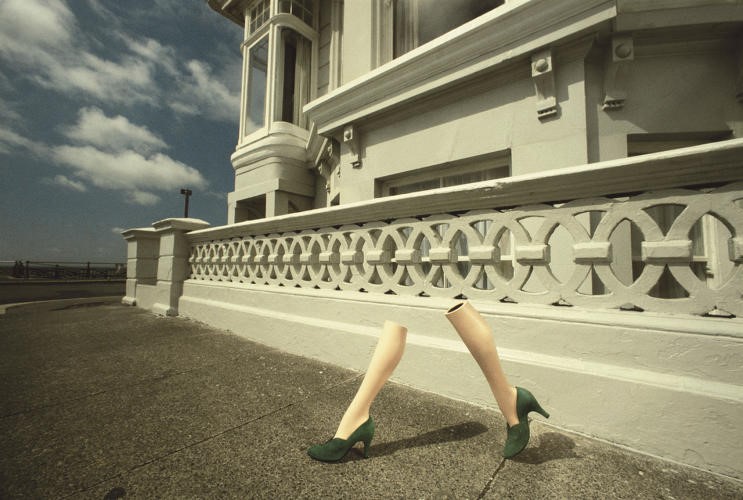 Like never before in fashion photography, the individuality of women’s body parts became essentially objects, to be enjoyed separately from the real person they were attached to. To his credit, it is art’s job to make you uncomfortable, and force you to analyse and really look into what we see. The problem is that in fashion, analysis often only goes as far as the clothes a model is wearing. The rest is accepted under the umbrella of general fabulousness.

It doesn’t shock me to find out that Guy Bourdin had a difficult relationship with women. According to several accounts, it was a consequence of being abandoned by his mother as a young boy. Guy openly admitted that he had never been able to forgive her. As a result he grew into a needy, possessive and controlling man with a disturbing tendency of keeping his girlfriends locked away his apartment, and insist that they cut contact with the outside world. Perhaps he was afraid that they would abandon him as his mother had. We will never know the driving forces behind his behaviour, the degree of influence it had on his art, or the true impact that it would have on his romantic relationships. What we do know is that two of Guy’s girlfriends committed suicide, one from what was believed to be an overdose, and another was found hanging from the ceiling of Guy’s apartment by his young son. Perhaps it was these tragic events that provoked Bourdin’s fascination with death in his images.

In 1994, not long after Guy’s death, journalist Anthony Haden-Guest of The New Yorker reported that, “In Bourdin’s last years, there was a feeling that he had outlived his time; under such disparate influences as the women’s movement and AIDS, the fashion world had fallen out of love with photographs that hinted at decadence, ambiguous sex, and female frailty. A decade later the references to Bourdin were appearing everywhere.”

This was the early 90s, and decadence, sexuality and the use of the naked female body to sell products was at it’s height. Some say Bourdin initially set the tone & aesthetics of ads like this Tom Ford Campaign and this one, also Dolce and Gabbana, Jimmy Choo, and anything by Gucci.

Up until very recently, when minimalism, simplicity and man repeller chic took hold of our collective imaginations, did Bourdin’s sexually charged aesthetic start to loose hold over the fashion industry.

Guy Bourdin was eccentric in every sense of the word. He would supposedly only work with people born under certain star signs, he took sleeping pills in order to make his dreams last longer, and he famously arrived at the French Vogue office on a camel.

Bourdin was not a natural self-promoter nor collected his works to make attempts to preserve them; in fact he refused several offers of exhibitions, rejected ideas for books, and wanted his work destroyed after his death , fortunately most of it was saved. His photography only appeared in magazines as he “shunned” books, exhibits, and awards. The first major book devoted to his work was Exhibit A, released ten years after his death. 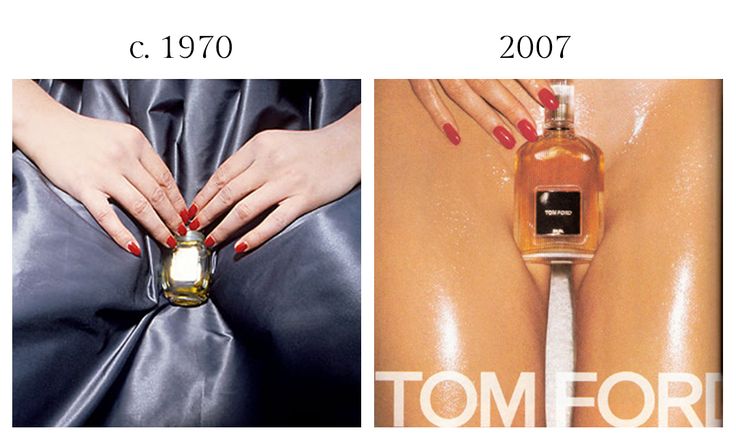 During one infamous Vogue photo shoot he dipped his model in a pool of cold water filled with black enamel. She was wrapped in plastic but not well, and the black enamel remained on her body for days after the shoot, much to Guy Bourdin’s delight. “It was probably not so much her discomfort that occasioned Bourdin’s glee as the possibility she would be prevented from working with any other photographer for some time,” reported Haden-Guest, “even in his notorious controlling profession, Bourdin was a very controlling man.”

During another photo shoot Guy had makeup artists paint models with glue and completely cover them with tiny light-reflecting beads. The team realized that the girls were blacking out because their skin couldn’t breathe, the Editors decided to pull the plug on the look stating, “We can’t go any further. These girls will die.” To which Bourin gleefully responded, ‘Oh it would be beautiful – to have them dead in bed!” A Truly bizarre way of interpreting beauty but regardless of all of this Bourdin was one of the most in-demand, and highest paid fashion photographers of his day.