As photographers we can be a fickle bunch. We love our work and dare I say, our art? Call it what you will, nevertheless photographers love the rawness & natural way that we capture things in camera.

From my experience I was at first VERY adverse to ‘’hyper real’’ skin retouching and frequency separation. Having said that when one is either trying to break into the market or refresh their portfolio to keep up with the trends & times ,  there’s somewhere where we have to make that compromise.

It is just a simple fact that more often than not, images have been altered — historically this was done by airbrushing and with painstaking tricks of lighting & exposure & more recently, with retouching software that can make celebrities & models look thinner, taller, unblemished, with brighter eyes and whiter teeth. Seemingly perfect it seems. Even subtle & discreet changes can have profound impacts on how we interpret or judge a photographs and the people in them. 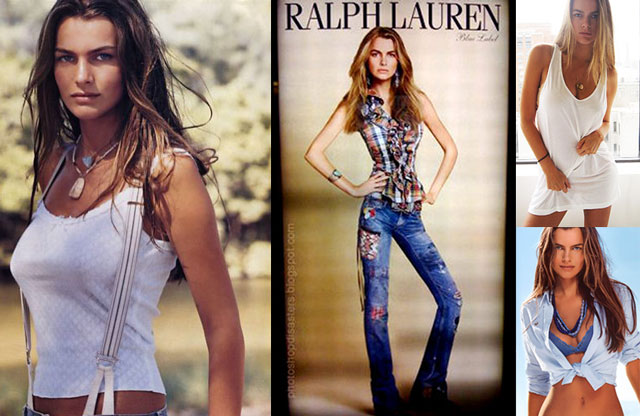 No one 20 years ago could have predicted how quickly the future of retouching would come. Suddenly, images could be changed even as they were being made, replacing backgrounds and filters with the touch of a button, turning night into day. It follows, then, that the next logical step in fashion would be a reaction against all that.

Some popular blogs have made a sport of identifying egregious cases of Photoshop use or as some may call it “abuse’’, but the degree to which changes are made is rarely disclosed (and usually only when a magazine is caught out). As retouching becomes more blatant & bizarre, often resulting in bodies that defy the natural boundaries of human anatomy, a debate over photo manipulation has spilled into public view, with Mr. Lindbergh, one of the world’s most famous image makers, leading the charge against the practice , even going as far as describing cover models as ‘’objects from Mars’’

“My feeling is that for years now it has taken a much too big part in how women are being visually defined today,” Mr. Lindbergh said in an e-mail exchange. “Heartless retouching,” he wrote, “should not be the chosen tool to represent women in the beginning of this century.”

Undoubtedly, the most compelling photographs are ones that show real character, said Mr. Freedman of W. Nevertheless, he questions whether there will be a remarkable change as a result of the media attention following Mr. Lindbergh’s French Elle covers. Fashion magazines, to some extent, thrive as an escape from reality, a window to something that exists outside the ravages of time.

“I wonder how long that’s going to last,” he said. “It raises an interesting point, but that in and of itself becomes a kind of gimmick. I would not bet my life savings that it is something they are going to continue.”

Mr. Lindbergh goes on to stir the pot by creating a series of covers for French Elle that showed stars like Monica Bellucci, Eva Herzigova and Sophie Marceau without makeup or retouching. 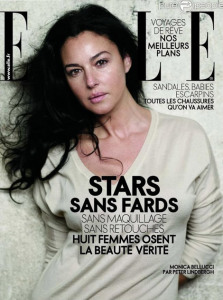 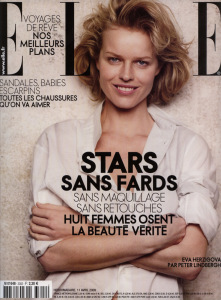 This issue struck a nerve with those in France, where at the time health officials were incidentally already campaigning for measures to force magazines to note when & how images are altered.

It now somehow, seems fresh, even exclamation-worthy, when magazines presents an unvarnished image.

“Fashion magazines are always about some element of fantasy,” states Cindi Leive, editor of Glamour, “but what I’m hearing from readers lately is that in fashion, as in every other part of our lives right now, there is a hunger for authenticity. Artifice, in general, feels very five years ago.”

Oddly, so does this debate. Even as far back as 2003 the famous debate of the retouching controversies arose when Kate Winslet stated that the British edition of GQ had excessively altered a photograph of her to make her look thin. 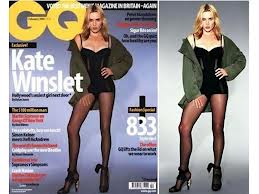 On a more recent note in 2010 Mert Atlas & Marcus Piggot photographed the legendary Madonna for interview magazine. Now to get a little bit of context out there , most of us have sighted Madonna in the tabloid magazines & newspapers and sadly have witnessed  her being almost cruelly , tarnished for her ‘’ageing looks’. She is such a huge public figure, that most of us are already well aware of what she looks like naturally.

When first sighting Mert and Marcus’ gorgeous & might I add , ‘’high stylised’’ photographs of Madonna I had  not seen the original versions.  However I still wasn’t alluded or tricked into thinking that Madonna might still actually look like that in real life. Having now seen the original images, I am not so shocked by the comparisons. We all know she looks like the pictures on the right, we all know she looks smashing for her age and is fit as a fiddle. Mert and Marcus’ highly digitised and cross processed technique really lends itself to the ultimate fantasy, in that the retouching is meant to be transparent. Others may have differing opinions but I essentially think this is a compliment to a stunning women, and certainly pays homage to her extended career and legacy. 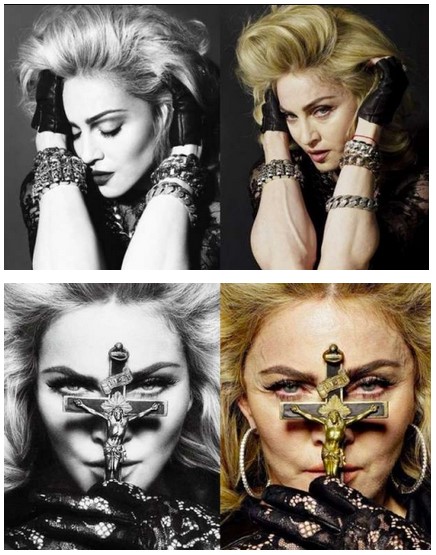 More often than not , especially if you’re an avid follower of fashion magazines and style blogs , we all can now accept that models can look drastically different depending on the image they are placed in. This also depends not only on the photographer ( we can’t be solely to blame) but also the editors of the magazine , the demographic of that magazine and of course the brand/label that the photograph is serving as a campaign or advertising medium.

“There’s no question that some images have been altered so significantly that, at times, it’s so apparent it’s transparent, actually,” said Dennis Freedman, the creative director of W, a magazine that intentionally features photographs of both extremes: Juergen Teller’s patently untouched portraits on one hand and the digitally stylised work of Mert Alas and Marcus Piggott on the other. 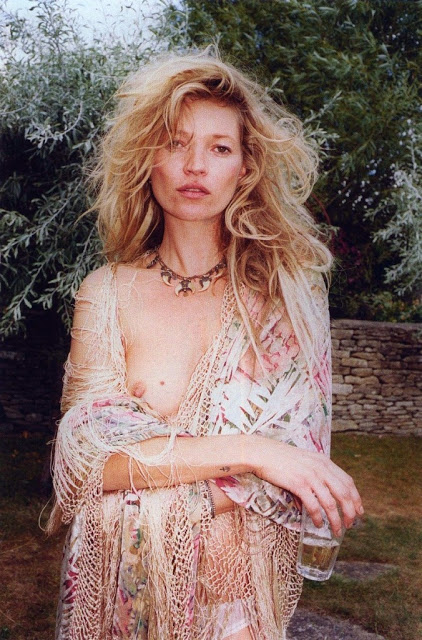 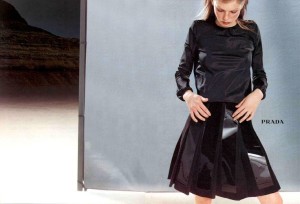 In the early 1990s when the first programs for digital manipulation were coming into use, some art directors began exploring the potential for creating images with a heightened sense of reality, actually as a reaction against the prevailing images of supermodels that looked too perfect in real life infact! Creating images like those achieved through special effects in movies.

Magazines like The Face crafted a style produced art director, Lee Swillingham  as “hyper real,” with photographs by Norbert Schoener, Inez van Lamsweerde & Mert and Marcus that seemed to share an affinity with artists such as Mannerist paintings. Models were presented as grand odalisques, sporting impossibly long necks, waists reduced to sizes against nature that were obviously manipulated. It seems like they were not suggesting that the look should be attainable as it is today.

As a fashion obsessed aficionado should know, when you pick up a photo of anything fashion and beauty related you have to remind yourself that no one really looks that good. Strangely one of the biggest criticisms of the fashion industry is these supposed ‘’unrealistic images’’ it creates for beauty. Yet in the in the last 5 years the fashion market (more so the advertising and beauty side of it) retouching, skin smoothing and flesh ‘’tucking’’ not only has taken off but seems to be the only way to go?

There’s always been ethical questions and qualms about photographic manipulation. People profess that the images in fashion magazines often misguides & gives young impressionable girls unrealistic expectations of themselves. Whether it is perfectly airbrushed, blemish free skin or a scantily dressed size zero.

We as photographers however, can perceive fashion photography as a work of art , a conceptual construction , perhaps similarly to viewing a painting and subjectively admiring it , while it serves a practical purpose of selling something. We as photographers can all look subjectively at images and appreciate them for what they are, but what society does with that, we cannot control.

So as we young fashion  photographers attempt to break onto the scene with our newly learned retouching & airbrushing skills , masterly crafted over hours of gruelling Photoshop youtube tutorials & loads of coffee in the pot . It’s really nice to look back on portraits taken by the likes of Corrine day and Jugen Teller to remind us of the rawness of natural beauty.

Although Anti-retouching naturalism is nothing new there has been a resurgence of snapshot style or off duty look portraits that are reminiscent  of the 90’s model era were photographers often prided themselves of having a very natural and raw appeal. 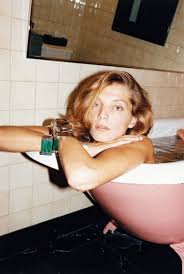 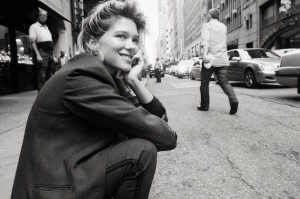 It is essential in any industry to keep on the look out for new trends & patterns  in order to constantly stay on top of our game. There’s really no other explanation for this rapid and fast paced insutry , than the invention of social media platforms & other rabbit hole friendly image & video sharing platforms that seamlessly make the transition between camera and iPhone. There are countless apps, that you can simply access with your smart phone , on the go , like the adobe Photoshop app that allows users to rapidly combine images & create their own customised galleries. This also allows you to ‘’ professionally’’ enhance each of your photos & share images via social media platforms.

Henceforth once glamorous & elite fashion industry (whether for the better or worse, I’ll let you decide) is not as unattainable as it once was. This fashion fantasy, this craft that we as photographers have all tried to covet and hone doesn’t seem quite as unrealistic as it once was.

Whatever side of the fence you sit on  we can all argue that photography is sometimes , not about recording the situation in front of you directly , but rather interpreting it much like painting , sculpture or design.  Although the fashion world may seem more attainable than ever before, its only because the technology ( camera and post processing software) is readily available. So we could naturally argue is the fashion industry becoming more real or is society becoming fake?