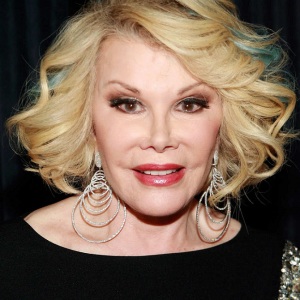 Up there with the glitz and glamour of the Academy Awards is always the controversy, and here at Fashion Industry Broadcast, we weren’t particularly happy when we realised that the always effervescent Joan Rivers wasn’t included in the ‘In Memoriam’ section. As someone who has always been considered a heavyweight in the celebrity department, it really was only fair that she got a mention. A picture and a few stats doesn’t seem like too much to ask for someone who has been in the business for over forty successful years, right? Apparently yes for the big wigs upstairs, but hey, whatever gripe they had with her, we’ve decided to overshadow with our own personalized tribute – and we think Joan would have appreciated it.

Thanks for being you. Thanks for being angry, unapologetic and appropriately cynical. Thanks for telling over privileged people when they dressed terribly. Thanks for not ever being fazed by the insincerity of celebrities, their agents and the media machine. Thanks for treating every single person that you met with the same amount of sceptical wit. Thanks for yelling at hecklers in your stand-up shows. Thanks for laughing at yourself. Thanks for showing the world that it’s okay to be insecure and afraid sometimes. Thanks for owning your face and your body and vicariously teaching other’s not to be ashamed of theirs. Thanks for showing us, a global audience of insecure people, that there is more to life than what we are fed by advertisers. Thanks for everything, lady, ‘cause you gave us hope – and you continue to do so even in death. As you would have so eloquently put it: “when I die, I don’t want a rabbi rambling at my funeral, I want Meryl Streep crying, in five different accents.” What a woman you were.