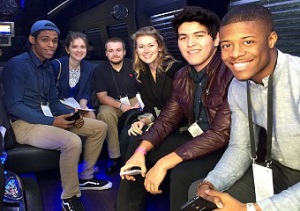 Hollywood as an industry is fickle, and whilst that might not be news to you, industry heads propelling the newest set of avante-garde filmmakers forward over already established ones might be. Earlier this year, over a thousand aspiring filmmakers submitted a sixty second short revolving around the question “what’s the best piece of advice you have ever received?”

Only six heard back.

Harsh, yes, but that’s the first introduction to the nature of the beast. Actors, directors and all sorts of other creative types flock to the City of Angels year after year hoping for their big break, only to be disappointed when they get their first rejection. To be aware of your luck is the tip of the iceberg in La-La Land. For the six young winners, their first glance at the true craziness of the glitterati presented itself on Sunday as they were selected to deliver Oscar statuettes to the celebrity presenters.

And by the sounds of things, the opportunity lived up to its hype. According to Patrick Walker, an aspiring actor, “we don’t always get these opportunities. I’ve met some amazing people and made some amazing connections… I’m ahead of the pack.” A great position to be in, but one that’s also fleeting. When the champagne is flowing, I’m sure that the promise of “I’ll be in touch” seems like an assurance that will hold its weight for months to come, but… those celebs aren’t the most reliable bunch.

However, despite the tumultuous outlook, the youngsters had their heads screwed on. Chris Carmona departed with these words of wisdom: “never be afraid to be passionate. Passion can take you a really long way. You also have to be quick on your feet, you have to have thick skin in case some hurtful words get thrown at you, you have to be ready for those rejections and those losses, and you have to be likeable – all at the same time!” Sage advice.

There’s definitely a reason why they were picked. As for whether they’ll survive the land of the lavish? Only time will tell… but we’re rooting for them. Go Team Oscar.