Whilst the Oscar’s dominated much of the everything-o-sphere this week, one person managed to trump that – no easy feat – but would we expect anything less from Tom Ford? In case you have been living under a rock for the past week, here’s a recap of how Mr Ford made himself a tri-formidable force in the headline world…

Unveiling his show in L.A instead of New York… Ford’s much-anticipated seasonal Autumn/Winter 2015 Women’s Wear Collection Presentation, which normally unveils in either London or New York was popped into the forefront of the media agenda when it was sprung on them right before the Oscars. The show’s new locale, which was originally scheduled to take place on Monday, was a “no-brainer” for the American designer.

“I’m a California resident, I have a house here, I’m usually in Los Angeles this week dressing someone for the Oscars, so I thought why don’t I just show in LA?” he said.

Announcing His Directing of Another Movie… Following the success of his debut feature film A Single Man, released in 2009 and based on the Christopher Isherwood novel of the same name, Ford proudly announced on Sunday during the Oscar ceremony that he would be returning to the silver screen… or behind it, anyway. Ford informed reporters that he was waiting for the third birthday of his son before getting back into the groove, and as its Alexander John’s birthday coming up, this has coincided perfectly.

“I’m in the middle of casting it and plan to shoot it in the fall,” he told AFP.  “I’m excited because it’s been too long.”

Almost Revealing His Leading Lady… When Ford sat down and chatted to one of the in-attendance journalist’s after his Fall 2015 show, he couldn’t avoid the barrage of inevitable questions about who would be cast in the femme lead. Although he diverted nicely, he may have just given it away. “It’s possible that we may see one of the celebrities sitting in the audience [as the lead],” he said. The plot thickens.

As for whether he’ll show again at the Oscars?

“Well, I thought it might be a one-off thing, but now I have to take a little distance from it. Was it good? Could I recreate it? Did (people) love it so much they would come again every year?”

Well, if you cast one of the front-rowers as your lead, they just might. 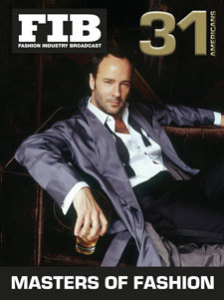 You can read all about Tom Ford’s life story in Fashion Industry Broadcast’s Masters of Fashion Volume 31, available soon on Amazon and Google Play.