Neil Young announced on Wednesday that he would be pulling his music catalogue out of streaming services due to poor music quality.

Announcing his decision on Facebook and Twitter, he revealed he would be taking a stand to only distribute high quality music for his fans. Read his statement below.

“Streaming has ended for me. I hope this is ok for my fans.

It’s not because of the money, although my share (like all the other artists) was dramatically reduced by bad deals made without my consent.

It’s about sound quality. I don’t need my music to be devalued by the worst quality in the history of broadcasting or any other form of distribution. I don’t feel right allowing this to be sold to my fans. It’s bad for my music.

For me, It’s about making and distributing music people can really hear and feel. I stand for that.

When the quality is back, I’ll give it another look. Never say never.

He then made a follow up statement on Facebook, further suggesting that he is not ruling out the possibility of making his music catalogue available on streaming services in the future.

Streaming sucks. Streaming is the worst audio in history.
If you want it, you got it. It’s here to stay.
Your choice.

Copy my songs if you want to. That’s free.
Your choice.

All my music, my life’s work, is what I am preserving the way I want it to be.

It’s already started. My music is being removed from all streaming services. It’s not good enough to sell or rent.

Make streaming sound good and I will be back.

It’s not that he has a problem with the digital distribution of music; “There’s nothing wrong with digital: it’s a tool, it’s a way to do things” he said in an interview with The Rolling Stone last year. Rather, Young is protesting against the sacrifice of sound quality for the sake of wider distribution.

Young has long expressed his concerns over sound quality and mastering, discussing it in his book Waging Heavy Peace and once buying 200,000 copies of Comes a Time to destroy them because of “a mastering error” on the tape. “I made a barn roof out of them. I used them as shingles” he told The Rolling Stone last year. 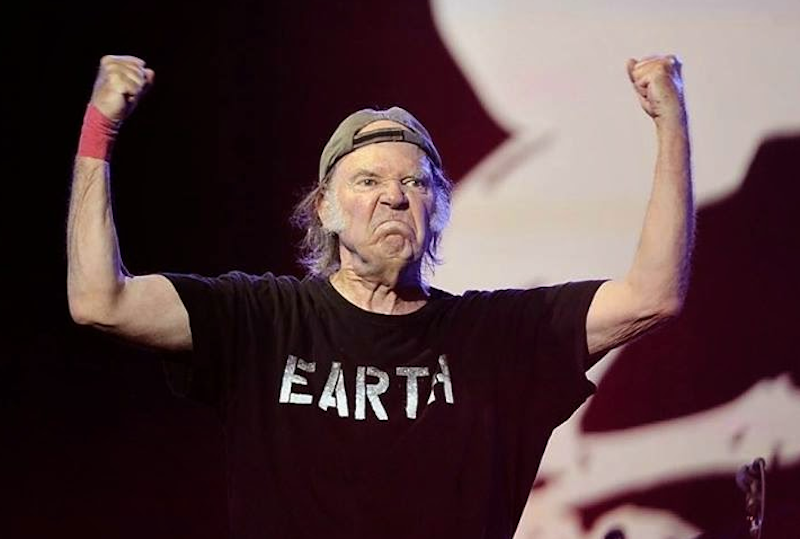 Young was the force behind the digital media device Pono, which reached over $6 million funding on a kickstarter campaign promising a device for high-quality listening “to preserve the feeling, spirit, and emotion that the artists put in their original studio recordings.”

His stand is admirable to say the least; “my goal is to try and rescue the art form that I’ve been practicing for the past 50 years,” he told Wired back in 2012.

However, his argument about sound quality has been criticised as both outdated and irrelevant.

Ultimately, the young listener with Spotify or Tidal is probably using $20 headphones and is willing to sacrifice an indistinguishable amount sound quality for the convenience of music streaming. So it’s probably a long shot to expect the fans who stream his catalogue to now rack up hundreds of dollars for better devices and music files for the sake of sound quality.

From Taylor Swift to Radiohead’s Thom York, a wave of prominent artists have heavily criticised streaming services for failing to adequately compensate artists and being “unfair to new music producers and artists,” and this is probably a more relevant stance to take against streaming providers.

So if you wanted to listen to Young’s new album, you’d better be quick.

Or you can just listen to the whole album for free here.