Invigorating current childhoods and bringing past innocence back to life, ‘The Jungle Book’ is getting a another film adaptation, set for release in 2016, with the teaser trailer hitting the internet today. 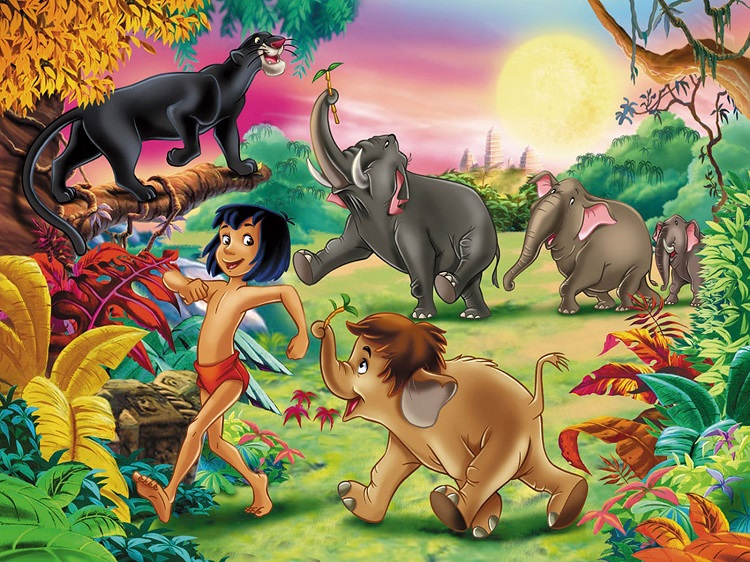 Who can forget the little boy Mowgli who was raised in a jungle by wolves and who becomes best friends with a Bear named Baloo and enemy of a Bengal Tiger called Shere Khan? The original stories date all the way back 1894 when they were published by Indian-born English author Rudyard Kipling. Known for their moral lessons, the illustrated stories achieved their screen debut in 1942 but it was the 1967 adaptation that became extremely popular. The animated version was produced by Walt Disney Studios and made some large alterations to the plot and the characters. Three films were also made from 1994-1997 starring three different actors as Mowgli. This is the original 1967 trailer:

Almost 50 years later, the new version is directed by Jon Favreau and will star Neel Sethi as Mowgli, Bill Murray as Baloo, Idris Elba as Shere Khan, Scarlett Johansson as Kaa (Indian python), Ben Kingsley as Bagheera (Panther), Christopher Walken as King Louie (Orangutan), and Lupita Nyong’o as Raksha (mother wolf). It’s an all star cast but Sethi will be the only live action character, with everyone else voice actors. The bulk of the scenes will also rely completely on computer generated graphics, with both animals and environment created digitally, shot in a Los Angeles studio. The 1967 version was a very musical film but Favreau has stated the new film won’t be as sing-song.

“We wanted to include enough music to satisfy people who grew up w 67 film but not make it a musical or betray action tone.”

Check out the teaser trailer below:

On first viewing it seems quite realistic and also very dark with Scarlett Johansson’s creepy too sweet to be nice voice the only character we hear speak. It looks like it will be accessible to both children and adults, similar to most Disney films. The graphics and action actually appear exciting and look fantastic. The plot of the film will be quite traditional with Shere Khan taking out his frustrations with man-kind on Mowgli, forcing Mowgli to undertake an escape and a journey of discovery meeting many creatures along the way which are hard to describe as either friend or foe. Mowgli is aided by Baloo and Bagheera and manipulated by Kaa and King Louie. Favreau has said balancing this film against the version that have gone before it was difficult.

“People expect action from this adventure. The original film felt so young. And the musical memories we have from that film [don’t] fit tonally with a film that’s photo-real, where there’s real danger and emotional stakes. The storylines and the mythology behind Kipling’s stories are very different from the animated film.”

Towards the end of the trailer we get the iconic and historical shot of Mowgli sitting on Baloo’s belly as they float down a river, something Favreau wanted to stay true to.

“To me the iconic image is Mowgli floating on the belly of the bear. And that was a challenge because the physics of it is not easy to do realistically. So we studied a lot of polar bears, buoyancy… to get it right. These are some of the earliest memories that I have. And it was vitally important to me to honour the images that stand out the most. But not do a carbon-copy of the original.”

‘The Jungle Book’ will open in theatres April 2016 and will be available in 3D. How excited are you?