Director Paul Feig has officially finished filming his reboot of the 80’s classics, which is set for a 2016 release. 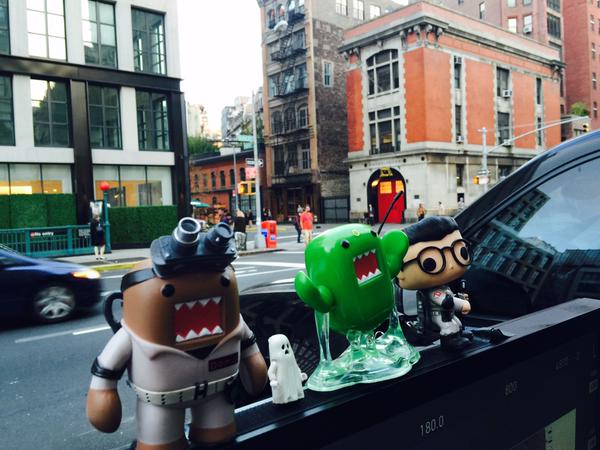 Feig tweeted this picture on the weekend in front the New York City fire station, which served as the headquarters for the original characters played by Bill Murray, Dan Aykroyd, Ernie Hudson, and Harold Ramis who has since passed away, announcing “It’s a wrap on Ghostbusters!”.

It’s been over 30 years since the original film was released in 1984 and it’s a testament to the success of that film this remake is happening. Bill Murray and co. were fantastically entertaining as unemployed professors who start up a Ghost Removal service. It’s been reported that both Bill Murray, Dan Aykroyd, and Ernie Hudson will make small cameos in the film, giving old fans some joy and the movie a seal of approval. Bill Murray spoke about his long reluctance and ultimate acquiescence to Vulture saying he didn’t want to overshadow this new project.

“I didn’t want to overshadow [them] or anything, and I feel really good about it.. I like those girls a lot. I mean, I really do. They are tough to say no to. And Paul is a real nice fellow. I thought about it for a very long time. Like, many, many months. No, that’s not right. I was seriously thinking about this for years, really … It kept eating at me, and I really respect those girls. And then I started to feel like if I didn’t do this movie, maybe somebody would write a bad review or something, thinking there was some sort of disapproval [on my part].”

However none of the veteran actors will be reprising their old roles because the latest film is a full-blown reboot with an all new story and a female led cast. Melissa McCarthy and Kristen Wiig lead the show alongside Kate McKinnon and Leslie Jones. Chris Hemsworth takes on the gender flipping role as the teams receptionist, played by Annie Potts in the original. The plot is still sketchy at this point but it appears the story will focus on the characters of Wiig and McCarthy who write a book about the existence of ghosts before they eventually have to team up with the other two ladies for a fun and scary adventure.

The decision to completely recast the franchise with all women heroes was a bold choice by the creators. It risks alienating all the fans of the old films and also endangers itself to being labelled as a feminist agenda, as some blogs have already done. This one is serious about these issues. Others such as Jezebel have posted hilarious satire pieces noting it’s ridiculous to complain about a female casting. Take a read here. There is a sense of nostalgia that will be lost but that is the point of a reboot rather than a remake. However undeserved the criticism is, it exists and there will be men in this world who refuse to watch it because of their backward thinking but this choice also opens up the film to a whole new bunch of fans. Men and women alike who have been hungry for a strong female cast that isn’t a spoof or another silly romantic romp should relish the new Ghostbusters which seems to have made an effort with the diversity of their casting choices. While Ghostbusters is a fun comedy at its heart, it will hopefully also flesh out these characters and give women something to latch onto other than a good supporting performance, as we see often (albeit diminishing) in Hollywood. Whether the characters are male or female should really make no difference to the quality of the story and the quality of the film. Paul Feig spoke about the backlash.

The question is: is the appointment of an all female cast a sales pitch or will the characters be treated with respect? Probably both.  One thing we don’t want to see is an all male cast as the villainous ghosts. That could send mixed messages. Either way, Ghostbusters is coming back and that can only be a good thing.