Colliding from different spectrums of the art world, Daimon Downey and Nicholas Samartis have come together to capture famous sculptures, touristy flower landscapes and audacious horses.

We were in the FIB office balcony at ‘The Casba’ on a Monday afternoon, and the long time friends spoke casually of their international adventures: performing for thousands of people on stage and taking photographs of iconic faces such as Keira Knightly and Katie Holmes along the cliffs of Malibu.

Samartis had brought along his young son, Giorgio, and the two seemed to have a close bond. Samartis tells me that he came back to Sydney after his adventures in LA and New York to give Giorgio has formative years in Australia. 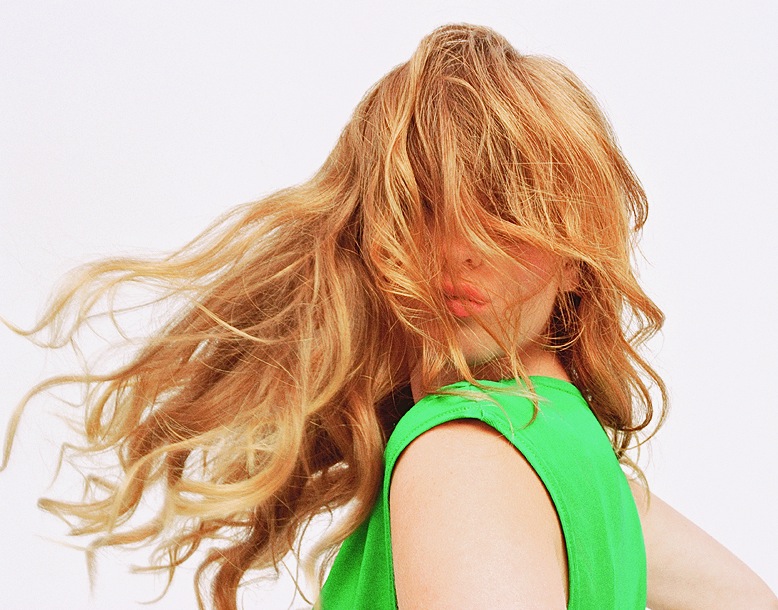 After taking his photography all around the world, the Australian photographer wanted to hang out with people who didn’t know what a booking was. Moving To Greece, he built a house by the sea before moving back to Australia.

“Coming back here after 15 years now, the whole industry has changed – which is good because we should always be moving forward,” he says. “But I think it used to be an art form and now it is a craft, and one needs to build some other facets to ones career.”

For him, this is now the challenging and exciting part of his career, taking him back to his roots – sculpture.

“I’ve done some photography and directing, co-directing with Daimon too, and I really need to go back to my roots which was originally studying sculpture. I want to get back into the art world and offer something. I think Daimon and myself both really have a lot to say.”

Most people know Daimon Downey for his time as a DJ in Sneaky Sound System, however he originally studied fine art in Sydney before entering the music world.

“My proudest achievement so far has been winning two Arias and touring the world, and having a hit album coming out of nowhere and never having studied music. It just appeared in front of us, and that was great.”

Then, after 14 years of not picking up a brush and travelling the world, Downey left Sneaky Sound System and began making a name for himself as an artist.

“I was a child before and I was an adult afterwards,” he says. “I had a chance to tour the world and see a lot of things I would have never seen. Being a little boy from Bellingen I had no idea I’d be around the world like that. I got to experience a lot of things, and then coming back fresh with all the time in the world to paint has changed a lot. That’s all I did afterwards.”

Downey and Samartis come from vastly different backgrounds. However, they have both have a history in the art world, and have collided to recapture their creativity in new ways.

“It just seems very organic. We get on really well, and I’ll tell you what, we just have a really good time,” says Downey.
“It’s all about ideas, and when you’re having a good time they just continue,” Samartis adds.

Suggesting that there may be more projects to come, the pair said they have done the research and spadework for three new projects.

The first and most audacious project will take Samartis back to his roots of sculpture. It is called ‘Towards David,’ and it involves large form artwork.

“We’re almost debasing one of the greatest art forms of all time, the masterpiece of Renaissance sculpture Michelangelo’s David sculpture in Florence. I hope we don’t get arrested for it,” says Samartis.
Downey disagrees: “We were hoping we would!” he says.

However before the pair take on the great David sculpture, they have been photographing BC sculptures, which they have access to at Sydney University. The University received a sculpture donation valued at $1.4 million in February this year, and have a large collection of donations that they have received over the years.

“They’ve got this great collection full of donations over the years and we have the opportunity to go and photograph these beautiful sculptures that have never been photographed before – except for in black-and-white textbooks,” says Downey. “We’ll be putting colour lights and super flash on them, and Nick will be turning these sculptures into beautiful portraits, and I’ll be painting over those.”

“We’re attempting to be bold with how we approach the works and have a healthy disrespect for how they’ve been photographed in the past,” Samartis adds. Downey laughs: “Totally!”

Samartis is headed to Greece this October to begin work on the project, photographing sculptures at the Acropolis Museum and touring Europe and Saint Tropez for the project.

Their second project is a slightly less ambitious series called Flowers – “everyone from Irving Penn to Robert Mapplethorpe has photographed flowers. And so we thought, Why not?” said Samartis. The project infers the great tradition of panned photographed flowers, particularly for beginning and hobbyist photographers, recapturing a genre that has been used by photographers and tourists alike. However, Daimon and Samartis will be taking a new approach, using industrial pressing machines and, in some cases, ride on asphalt rollers in pressing the flora before it is photographed.

“The horse series that we’re doing at the moment involves a bit of audacity. We’re doing life-size photographs of horses, and Daimon’s going to do something really bold and graphic with those,” says Samartis.

It seems like the pair already have their work cut out for them. However, as they continue work on their collaborative projects, they also maintain a multitude of individual projects.

Samartis tells us about Project X – a culmination of his time living in some of the best hotel rooms in the world, situated in the immersive high cultures of Paris, LA and New York.

Samartis is creative director of Project X, a hotel just past the Bowral area. Along the lines of the Chateau Marmont, it’s a “fun little project” for Samartis, who has worked with some of the greatest set designers of all time for Vogue.

“Travelling the world, I spent a lot of time photographing and partying in some of the best hotel rooms. Project X is the coming together of a lot of my experience. I was lucky enough to work with some of the greatest set designers of all time to create a set with Vogue, as well as with advertisers and running a crew, so that holds me in a good stead for design projects.” he says. “However, it is the artworks planned that will take up most of my time in the near future.”

French Actress and muse, Philippine Bertin. A preview of our campaign and film for ‘Project X’ in the Southern Highlands. Featuring a Jonathan Ward one off creation. Oh what fun is it to be a Creative Director, Designer and Photographer on this gem of a project. With gorgeous A team, uber stylist Eliane Parmentier. #TheRobertson #SouthernHighlands #Hotel

Samartis said he would continue with similar projects in the future, as long as he is passionate about it.

“I don’t care what I’m doing as long as I’m really vibed about it and can’t stop thinking about it. When that happens you’re motivated and you have a deeper cut with the ideas, instead of phoning it in,” he says.

One thing that Samartis and Downey both have in common is their passion for sculpture. In fact, Downey built 43 sculptures for Alice McCall’s Mercedes Benz Fashion Week runway last year.

“She had a great artist the year before, and she wanted to bring art and sculpture into the runway, so that it’s really easy and beautiful to photograph from where everyone is sitting, which is important for social media,” he says.

With only two weeks to organise the event, Downey had to fill an unusually large space in only a short amount of time.

“The first idea was to build a four-story high sculpture, but there was some danger and logistic issues with that,” he says.
“She just let me go for it because she wanted an artist to fill the space, and she wants another artist for next time to keep it going.”

Whilst they had little time to design the set, Downey said it turned out exactly as he envisioned it.

“It turned out perfectly. I’d never seen so many in that size, and it looked fantastic. Especially from the photographers point of view, it was really good,” he says.

The pair come from different spectrums of the art world, however their commonalities are a demonstration of how artists have always been genre-blurring in their creative output.

“I heard Picasso was a great dancer!” Samartis exclaimed. “It’s about not being afraid to venture into other avenues. You can get safe and stale staying in one genre, but it’s an invisible wall. We should be able to move all over it.”

“Artists don’t always think about the one style,” says Downey. “They look around them and see other art and feel other things. You still feel form even if you’re a painter – as long as you’ve got the mediums in front of you, you’ll use whatever you have.”

Both Downey and Samartis have a vast repertoire of projects. However, when it comes to what project they would like to be remembered for, Samartis said “it may be sentimental in the end.” 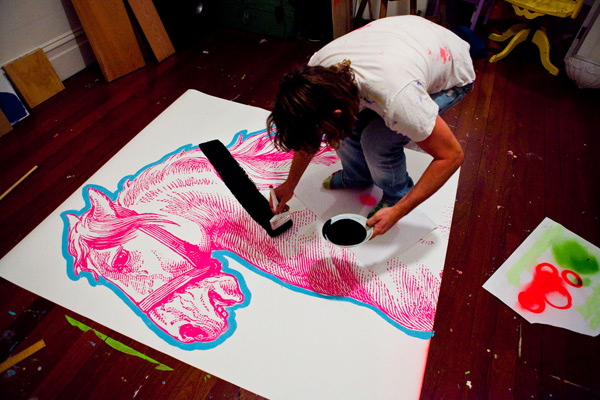 “Daimon’s paintings will have a lot more longevity and there’s a lot more power to them, but with photography there’s that real sementality factor,” he says. “So I think unfortunately, or fortunately, they’ll be just a little humble photograph that I probably took with a little snappy camera of Aspen snow.”

“Or maybe my grade 6 painting of a Brolga which one an award in primary school,” says Downey.

Whilst the pair have achieved great things in the art world, they say their best projects are yet to come. “Have I made it yet, have I built that one yet?” says Samartis.
Their collaborative work, however, is something Samartis said they could be remembered for.
“We’re putting a lot of our energy into those and I have a really great feeling about that.”