In this day and age, one may find horror is not the preferred genre among most. The reasons vary: one may be too afraid to watch horror films; one may prefer older, classic horror films; or most likely the terrifying truth, one may not find horror films to induce any horror at all. With the objective of withdrawing one’s deepest fears whilst engendering a cathartic experience, horror films of today hardly achieve this (and receive much criticism for this reason). So, what are they doing wrong?

After establishing itself as a genre in the 1930’s, early horror films used familiar, as well as innovative material to fashion a novel type of cinema that featured the macabre on screen. Nineteenth-century Gothic literature influenced early Universal Pictures such as Dracula (1931) whilst outbreaks in technology merged science fiction to fashion films like Godzilla (1954). These films proved themselves idiosyncratic to the other orthodox Hollywood pictures of the time.

But new meaning was really brought to horror with the inauguration of “slasher” films. Hitchcock’s Psycho (1960) holds responsibility for welcoming these new dynamics. Normal Bates’ pursual of Marion Crane established a “slasher film” as one that involved a psychopath brutally preying on its victims. Just thirty minutes into the film, the protagonist (Marion) is murdered in a most memorable scene which holds eminence to this day. The “shower scene” runs for three minutes, includes fifty cuts and seventy-seven different camera angles, and combines an iconic, chilling soundtrack.

Hitchcock’s cinematic innovation – in exposing unseen violence, behaviour sexuality on screen – can be held accountable for his acclaimed title as the ‘Master of Suspense’. It triumphs in establishing itself as a work of cinematic art, as well as a one of the greatest horror-thriller’s of all time.

“My suspense work comes out of creating nightmares for the audience. And I play with an audience. I make them gasp and surprise them and shock them” – Alfred Hitchcock

Psycho paved the way for a multitude of slasher films to be created in the 70’s and 80’s. So much so, that the genre lost meaning. Films such as The Exorcist (1973) and The Shining (1980) carried on the line of cinematic success’ for the horror genre in different ways that included the supernatural, demonic children and uncontrollable forces.

Eventually, most became immune to this violence and needed something fresh.

The true ‘death of horror’ can be marked by the spoof films of the late 90’s. The Scream franchise grossed over US$600 million by mocking what the genre had become. The title itself pokes fun at the failure of these horror films to fulfill their purpose: to create fear to the point of ‘Scream[ing]’.

Kevin Williamson and Wes Craven’s Scream (1996) poses a mysterious character, “Ghostface”, as a serial murderer igniting another killing spree (accordingly dressed in a costume more likely to be seen at a fancy dress party rather than a crime scene). 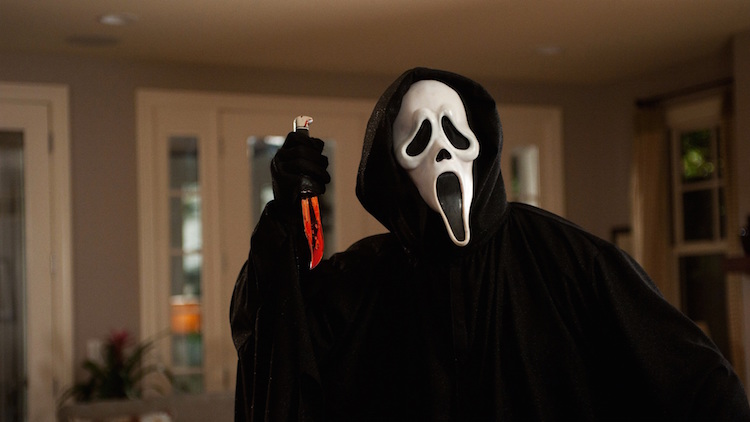 Ghostface:“Do you like scary movies Sidney”
Sidney: “What’s the point? They’re all the same. Some stupid killer stalking some big-breasted girl who can’t act”
[The scene then proceeds in a chase]

Moments like this are countless in the film and capture the way Scream combines humour with the traditional slasher film genre to prove it’s point. Williamson and Craven break the fourth wall by making the audience fully aware that they are watching a horror film about mocking horror films. The constant references to movies and the horror genre (“Its all one big movie, only you can’t pick your genre”) are metafictional devices that dismantle the audiences suspension of disbelief through irony and self refection. It sets out to satirise the clichés of films such as Halloween (1978) that featured the “whodunit” mystery.

We may be watching a string of deaths in a climactic chase scene, yet the mismatch between visual and audio, over-dramatisation, and excessive amount of deaths construct it humorous. This is the ultimate ridicule of the progression of slasher films. Scream received significant critical acclaim for this reason and reinvigorated the horror genre at the time.

Exceptional films produced in the recent years provides hope for the horror films of the future. It Follows (2014) is a film that works. Director David Robert uses the supernatural as the central element of the plot: a girl is constantly followed after a sexual encounter. Paranoia, claustrophobia and anxiety are common fears amongst all, and subsequently, the terror of the plot feeds off this relatability (as opposed to an unrealistic scenario full of blood, guts and gore common in films of the 2000’s). It ticks the boxes that the horror genre demands by incorporating traditional horror devices whilst simultaneously subverting accustomed techniques. It is traditional in the sense that is it narratively cyclical – the opening shot features a girl running out of her house in circles, finally forcing her to exile to an isolated beach. The plot loops back to this, just with a different protagonist. 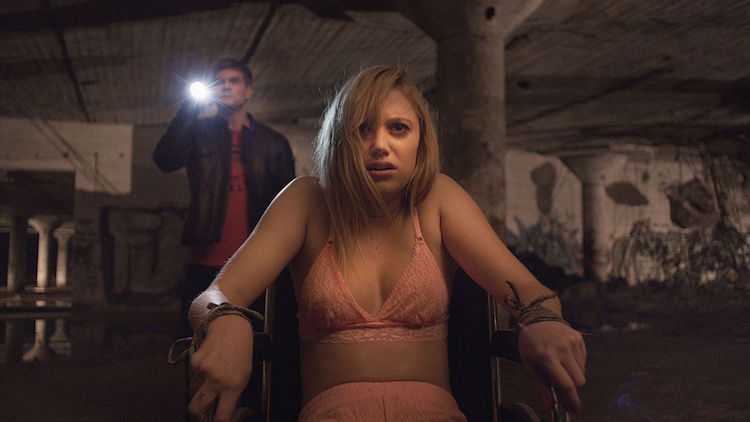 Subversion occurs often, most commonly cinematographically. The camera fixates on a shot, leaving the audience in anticipation and expecting a sudden pop up that will shock. But Roberts leaves the audience in this suspense, and gracefully exits into a another scene.In these ways, It Follows sets itself apart from this century’s regression to producing horror movies that lack substance.

The one common theme of all successful horror films – subverting the audiences expectations. Destabilising the audience makes a good horror movie. An audience of the 1930’s would have been mesmerised by the early attempts to depict dark melodramas on screen, never before witnessed. It would have been in many ways, terrifying. A viewer watching Psycho today may giggle at the infamous “shower scene”, but during Hitchcock’s era, no such savagery had been depicted before in a movie. Scream set outs to prove that in the digital age of today, we as an audience, have become immune to the horror. It makes us precisely aware of this. It Follows understands this and instead, produces something innovative that is in actually scary. Filmmakers of today’s horror need to strip away this century’s obsession with blood, guts and gore and look towards producing something fresh that will frighten any audience.