The world’s most famous Down syndrome model, Madeline Stuart, has made her second appearance on New York Fashion Week this week.

The 18-year-old Australian girl achieved Fashion Week fame in 2015, when she was cast to walk for Italian fashion house ‘FTL Moda‘. Making instant headlines around the world, her appearance was seen as triumphant in an industry criticised for a lack of diversity. ‘FTL Moda’ is renowned for their diverse cast of models, featuring a number of amputees and ‘differently-abled’ men and women.

Fashion week is plagued with new attempts to stand out amongst the flurry of up and coming models and fashion enthusiasts. Madeline Stuart has made history, walking down the catwalk as a poster girl for others with this disability. Madeline’s mother, Rosanne Stuart, had previously explained to ‘Bmag‘ in 2015, that other models have their own talents or features that set them apart, but “they don’t have the same following that Madeline has.” 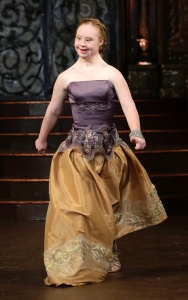 Madeline Stuart has returned to Fashion Week this year, proving that she isn’t just a “one hit wonder”, as described by her mother. Rosanne told the ‘Daily Mail Australia‘, that, “‘If she gets lots of attention it’s amazing because we can speak to the world about inclusion and diversity.” Madeline wants to prove that her first appearance was not just a symbolic effort, but an attempt to challenge the constraints of the industry.