Mercedes-Benz Fashion Week Australia is just around the corner so it’s time to have a look at what we should expect this year. Next to established Australian designers, #MBFWA also showcases a carefully curated selection of who they think will be the next big thing. By “they”, we mean none else than IMG’s head of fashion, Ellery’s general manager, Vogue Australia’s editor-in-chief, the merchandise director of David Jones, the editor-in-chief of Harper’s Bazaar Australia, the director of Parlour X and MyTheresa.com’s buying director. Quite a comprehensive and intimidating panel, isn’t it?
Well a bunch of talented young Aussie designers made it through this jury and were selected for the St. George NextGen show 2016. No need to wait until their show in May; FIB already had a little chat with these promising creatives. Let us introduce you to Jason Hewitt, the rebel mind behind JA-H. 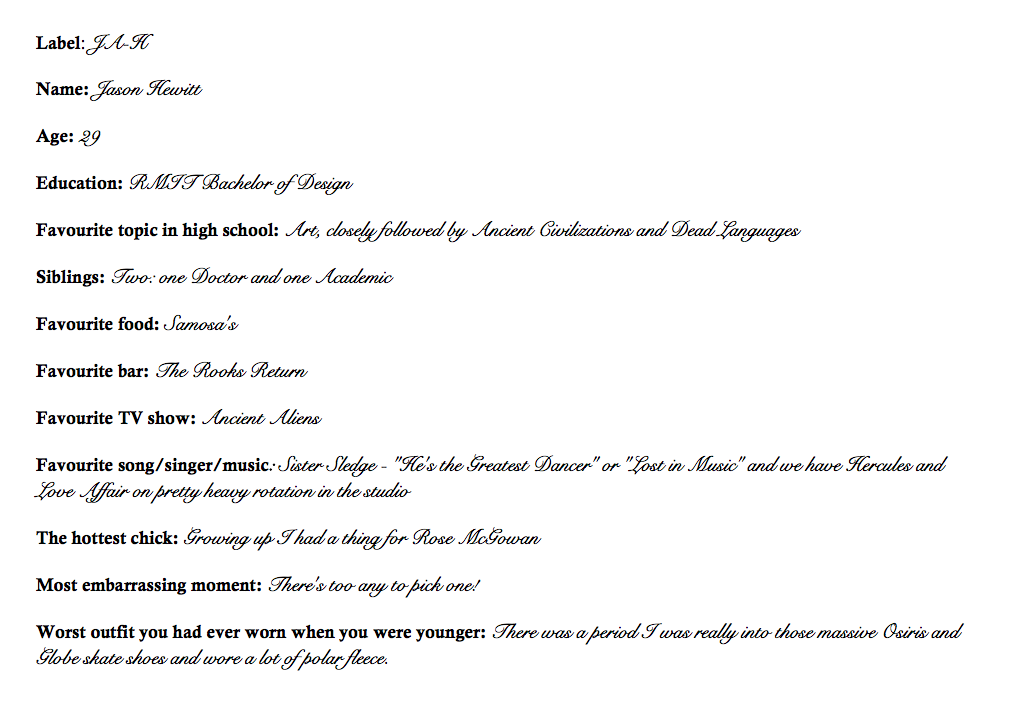 What do you think makes you special as a designer? Why do you think you were nominated as one of Australia’s next gen’ fashion designers?

I have no idea if I’m even special, let alone what makes me special. Maybe it’s just a point of view. I guess I was nominated because the judging panel saw potential in me and in my ideas.

Describe how you feel about showcasing your collection at MBFWA in 3 words.

Can you tell us a little bit about the collection you will show at the fashion week?

It’s called “Kingdom of Fear” after Hunter S. Thompson’s novel of the same name. I had read the book a few years ago and thought it was interesting the way Thompson had unintentionally predicted the type of society we live in today. At the same time I was becoming increasingly frustrated by the Australian political system -especially after Tony Abbott was elected- and the way we were dealing with issues like refugees and the environment. I was trying to work out why we do all these horrible things to each other and the more I thought about it, the more I realised the answer is fear.

Some treat refugees like criminals because they are scared for their quality of life and they are worried that they could be terrorists. Others are racist in fear of losing their privilege as white people. Women are still underpaid and under-represented because men are afraid of them taking over.

I’m afraid of religion and the horrible thoughts it inspires people, not to mention the sense of totally undeserved moral superiority it gives them, but you won’t see me running around trying to burn down a cathedral. Yet some idiots in Ballarat thought it was totally justifiable to protest against the building of a mosque.

It is hard to articulate these ideas because they are quite abstract once you’ve distilled them into something wearable. But to cut the rambling short: the collection is about greed, excessive wealth, protection, the end of the world, and how all politicians are lying assholes and the slightly hallucinatory nature of human society in the 21st century.

JA-H is all about sustainable fashion, aiming to have the smallest possible impact on the planet. Did you always have this very specific label’s identity in mind or did you develop it through time?

It came about while studying. As you learn more about making clothing you come to understand how much effort and energy goes into its production. So you realise that it is a very resource-intensive industry, and that if you are paying less than $60 for a tee shirt, then somewhere down the production line someone’s getting f***** -excuse my French. This person is probably the guy who grew the cotton or the person who made the t-shirt.

Well firstly the ‘process’ involves coming up with an overarching idea, which over time will evolve into silhouettes, prints, colour schemes etc. Inspiration can come from pretty much anywhere, I try to just take in as much as I can and let things happen by osmosis. A lot of our work does tend to be shaped by political and current events: protest, political and corporate corruption, climate change and the influence that Christianity and other religions are allowed to have on what is supposed to be a secular society. All these things tend to express themselves in what we do one way or another.

The statement on our website that all of our products are the result of an actual process is our way of pointing out that we actually do have a design process. We aren’t H&M or Zara sitting around a table throwing around idiotic trends and ripping off what designers are showing on the runways so we can churn out 52 collections a year. I adamantly refuse to look at trends and I try to isolate myself not to look at other designers’ collections when designing one.

Well in case you haven’t guessed already, I absolutely loathe fast fashion retailers; I’ve had massive fights in the past with people for shopping at H&M or Topshop.

I don’t care how much organic cotton they use or how many ‘Conscious Collections” they create; any business model that relies on shifting hundreds of millions of units of clothing a year is inherently unsustainable because it encourages consumers to view clothing as something they throw away.

In 50 years I hope that companies like these would either no longer exist or that they would have actually overhauled their supply chain -much in the way Patagonia has- to ensure they are actually sustainable and ethical rather than hiding behind a bit of PR and ‘greenwashing’.

I do see smaller, craft-focussed & locally produced businesses having a bigger influence on the industry. So many people are currently studying fashion or starting their own labels that I can definitely see a major push towards smaller production. Niche labels would become the norm rather than the luxury brands that came out of the eighties and early nineties. Instead of having more Ralph Lauren, Calvin Klein and Wang we would see people who are still well known and popular but don’t operate on the same scale.

That being said, not a lot will change unless consumers push for. Unfortunately, what I’ve seen from the mainstream public doesn’t show a lot of critical thinking so by 2066 we could just be living in an apocalyptic landscape awash with unwanted sequinned boleros and $7 tee shirts.

Your label’s logo features the “JA-H +Active Resistance To Propoganda”. Why did you decide to spell it that way?

You are the first person to pick up on that. It’s a typo, but I like it now so I left it. Not everything has to be perfect.

You have shown various bodies of work at different exhibition before this. What kind of art did you use to do?

Mostly painting, large-scale abstract, impressionist and symbol based work. I still paint and I want to get back into doing it more, maybe I could get into installation and sculpture as well. One practice feeds the other so I think it’s good to give other mediums a go as a way of exploring more abstract ideas.

Why and when did you decide to become a designer?

In 2000 when my mum bought me the catalogue for the Gianni Versace retrospective that was on in Sydney. At the time we had just moved to Launceston, Tasmania, which I saw as an exile. Seeing all these super glamorous outfits and reading about their craftsmanship had a pretty profound effect on the 13-year-old me who was – somewhat over dramatically – mourning his removal from the big city.

Who is your favourite Australian and international designer?

Locally I still admire Dion Lee, even though it has more to do with his SS 2010 collection than anything else. I definitely have to give props to some of the people I went to University like Nadia and Cami from DI$COUNT.

Internationally I love Azzadine Alaia: he shows his collections whenever he wants to, doesn’t buy advertising and sticks to his principles. Raf Simons is a great designer and I also admire the fact that he took the risk to leave Dior. He knew himself so well to realise that no matter the prestige, if you can no longer find time to do the things that actually inspire you and make you such a great designer then it’s not worth it.

Who would you love to work with in the industry and why? Name a designer, a photographer and a model.

Vivienne Westwood, because apart from being the godmother of Punk, anyone who would drive a white tank up to the front gate of 10 Downing Street to protest fracking is someone worth getting to know. Plus she isn’t afraid of politicising her work, which I find encouraging considering I like to do the same. Not to mention her collections are often collectors’ items: people are still wearing and reselling pieces from the eighties.

Photography wise, we have some brilliant Australian artists I could mention but while we are on the topic of ‘pipe dreams’, I might as well to say Nick Knight. His use of new media is brilliant and his photographs and films are some of the most inventive and fascinating -albeit often quite dark- I’ve ever seen.

As for a model, she doesn’t model anymore but I’d be pretty keen to shoot with Anjelica Houston. If you’ve ever seen her movies you’ll know why. But if I have to choose an working model I’ll go with Stella Tennant.

Australian designer Josh Goot just moved to New York to find more challenging opportunities. Would you like to move overseas, or do you like the Australian fashion scene?
Right now I’m going to say probably not – I love visiting New York, London or Paris, but I have no interest in living there. But who knows?
You are already showcasing your work at the fashion week. Did you expect to go that far, that quickly? What are your next goals?
I didn’t even think we would get the NextGen show to be honest. The initial application questions were very social-media focussed. And while I can see the usefulness and the importance of platforms like Instagram and Twitter as a way of marketing your brand and engaging with consumers, I also prefer to focus on the products we’re making and the design process than how many followers we have. So my numbers in terms of followers aren’t exactly staggering. But we did get through to the second and then the final round. When I received the email announcing we were one of the 6 designers, I fell off my chair.

My next goals are to really build on our internal production capabilities, and get our foot in the door with some really good retailers here in Australia and overseas. We’re also planning on putting together a showcase of one-off and experimental looks for July/August. We end up with some really amazing ideas that have to be put aside because they’re just not viable to put into production. Also, developing and working on single-run pieces gives me and my design team a chance to really flex some muscles creatively so we thought it would be a good way to put forward some more interesting propositions we’ve come up with and see how they go.