Beyoncé has joined in on the athleisure trend, releasing her new active wear collection ‘IVY PARK’. With an accompanying promotional video that will give you all the right chills.

Super Star, Fashionista and Entrepreneur, Queen B released her new endeavor with TOP SHOP on the 14th of April. The active wear apparel line dedicated to women is a joint venture and partnership collaboration with Sir Philip Green. The aesthetic combines fashion with technical innovation, mastering a look for both in and out of the gym.

The collection is made up of sleeveless body suits (hero piece), oversized hoodies, soft jersey tees, tights, tracksuits, crop tops and accessories such as headbands and gloves. Some of these pieces portray confidence with large black and bold ‘IVY PARK’ block lettering prints, and others with a more minimalistic design approach, catering to all aspects of the athleisure market.

Traditionally, an individual’s wardrobe for gym outfits would consist of old t-shirts and whatever pair of pants that you fell asleep in the night before. But in 2016, activewear has undeinably had a long moment in fashion and athleisure style has really taken off. Rihanna’s recent collaboration with Puma, and Rita Ora’s Adidas originals line are prime examples of the power that entering the athleisure game has (from a business perspective). We can’t blame Queen B for taking advantage of this opportunity!

Not only is the apparel line powerful and empowering by embracing the female body with a curve friendly approach to active wear, but so is the marketing campaign. Beyoncé stars in a 2-minute video, with her daughter Blue Ivy making a cameo. This creates a personal and emotional attachment to advocates.

The creative direction such as the setting, lighting and filters used in the clip are all influential to the uplifting feeling you get after watching the video. The opening scene begins with Beyoncé standing with a strong structured pose, surrounded by her dancers all sporting the clothing line. Black and white flashbacks, as well as home videos from when Bey was younger, feature throughout, exposing a sense of her nostalgia and telling a story of where she began and the evolvement of where she is now.

All these visual elements are emphasized with Beyoncé’s voice over:

“I’d wake up in the morning, and my dad would come knocking on my door and tell me that it’s time to go running. I remember wanting to stop, but I would push myself to keep going. He taught me discipline.”

She makes personal reference to her childhood and family, gives us an insight to her daily routine, struggles and sacrifices, as well as her outlook on the world and beautiful nature that surrounds her old exercising stomping ground, Parkwood Park, Houston, Texas (the main setting in video).

As a woman drowning in success, Beyoncé, just as anyone else, still deals with everyday personal struggles. She shares how she deals with these stresses through exercise. Expressing her connection and involvement with the line, the flashes of the singer (as her own brand ambassador) is pictured in various IVY PARK outfits, exercising and expressing herself through physical activity; dancing, skipping, riding, and swimming. She calmly states, “There are things I’m still afraid of. When I have to conquer those things, I still go back to that park. Before I hit the stage, I go back to that park. When it was time for me to give birth I went back to that park. The park became a state of mind. The park became my strength. The park is what made me who I am. Where’s your park?” 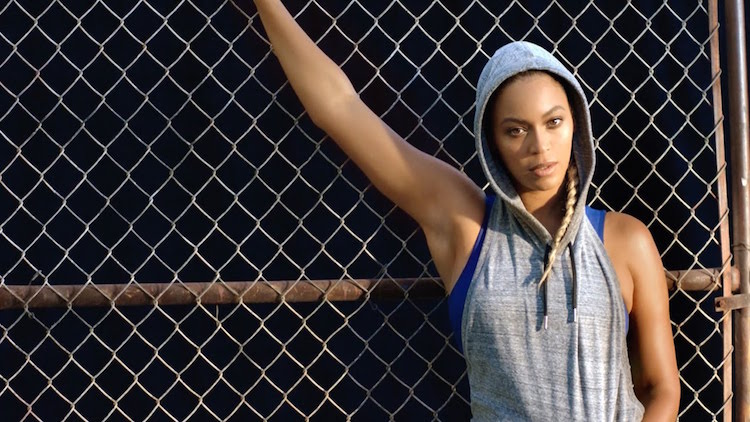 Yes, Beyoncé and her business partner Philip have found a social trend and jumped on board, but they have defiantly taken a different approach to the promotional content. Taking her fans on a journey, the promotional video gives back a visual story, with meaning and purpose to motivate, to inspire and empower. These three attributes are all an extension of Beyoncé herself.