It’s Australia’s night of nights. Honouring our ever growing television industry and broadcasting the acceptable drunken behaviour of our favourite tv personalities (We’re looking at you Karl). This year though it seems the awards have once again secured a place for themselves in the world of entertainment relevance.

Waleed Aly took home the coveted Gold Logie last night, dedicating the award to “everyone with an unpronounceable name”. His acceptance speech was a perfect mix of heart and humour.

“Do not adjust your sets. There’s nothing wrong with the picture,”

“This is happening. Finally a male presenter on commercial TV has won a Gold Logie.”

The other nominees were gracious in defeat, even Chin who entered the night hungry for blood. 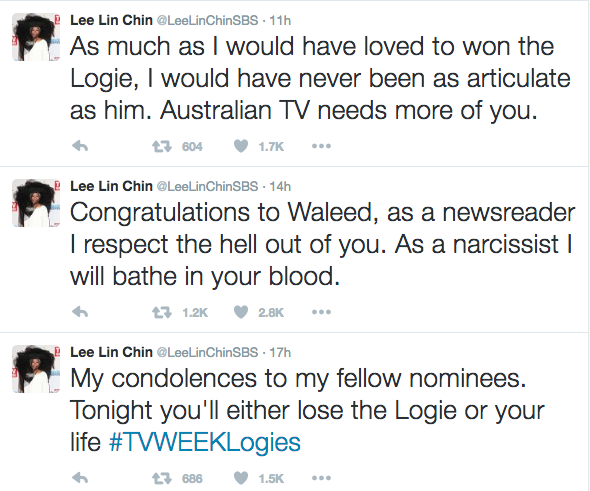 The award recognises not only the immense impact that Aly has had on broadcast television in the past year but the painfully slow yet definite progress Australia is making towards acceptance.“If tonight means anything, it’s that the Australian public, our audience, as far as they’re concerned, there is absolutely no reason why that can’t change”. This idea was brought to the forefront of the awards show earlier in the night when Noni Hazelhurst, actress, TV personality, Play School star and Australia’s surrogate mother/ideal PM was inducted into the television hall of fame.

Introduced by Cate Blancett via video message Noni’s speech delved into an array of issues, beautifully presented and insightfully collected. Talking about the impact PlaySchool had on her career and life “I started to see a world through the preschoolers eyes to see how free and unafraid they are to just be,” she said. “They haven’t yet been conditioned. No child is born a bigot.”

Hazelhurst took the time to remind viewers of the importance of optimism, that though it is easy to get bogged down in the negative news stories, this years awards was proof that the industry is slowly but surely moving in the right direction, comparing the speed in which it’s doing so to a glacier. “The great thing about glaciers is if you’re not on them you go under. I’ve been riding that glacier for 40 years. And I’m staying on top of it.”

It wasn’t all inspirational speeches and life changing messages however; Dave Hughes, Kitty Flannagan, Peter Helliar and Shaun Micallef provided us with an array of laughs throughout the evening, poking fun at everything you hoped they would. Rolf Harris, the 60 Minutes Beirut incident and our love of international celebrity chefs.

Potentially securing her place as next year’s host Julia Morris graced us with an impromptu karaoke performance  of Bonnie Tyler’s 80’s hit I need a Hero after it was brought to our attention that she first performed the number on 1985’s New Faces talent show.

What are the Logies if not an opportunity to live your teenage dreams. Now we start the long and harrowing countdown to next years awards. To prepare, watch as much television as you can and spring that $5 on TV WEEK. It’ll be worth it in the long run.

The Most Outstanding Miniseries or Telemovie