There has been a lot of backlash about Kendall Jenner recently landing the coveted spot as the model on the cover of the September issue of American Vogue. This issue is considered the most important because it is the start of a new season of collections and is filled with advertisements.

While some claim Jenner is not highbrow enough for the likes of vogue, in many ways she has proved herself as a model to be reckoned with; considering her catwalk experience and designer campaigns making her an ideal vogue cover girl.

Kendall Jenner is the half-sister of Kim Kardashian; the Kardashians are known as unrefined and fame hungry and are mainly associated with their reality show. Reality shows are mainly considered low brow and tacky. Vogue, however is highbrow and considered to be sophisticated and of good taste. It is the clash of these two areas of popular culture that has brought heavy criticism on Kendall as the cover of the September issue.

When Kim Kardashian appeared on the cover of Vogue with Kanye West for the April 2014 issue, there was a similar reaction. Sarah Michelle Geller commented on twitter that she was going to cancel her Vogue subscription.

There has been a lot of backlash on social media regarding Kendall’s vogue moment. The hashtag #RIPVogue became a popular outcry, labelling the magazine as a ‘sell-out’. Here are some comments about the cover,

“Just sad that Wintour, Vogue and a lot of top fashion brands have become such sellouts.”

“Kendall being on the September Vogue issue is a bit of a joke… like??? I love the Kardashians/Jenners but…”

There is an accompanying video where Kendall’s family is ignoring her on the day the cover is released, just before they throw a surprise celebration for her success. However, even this was criticised by social media users one who pegged it as..

“the most Kardashian thing I have ever seen”

However, Kendall has worked hard for her success and to separate herself and carve a career for herself as a model. Her first break was with Marc Jacobs who cast her in his Fall 2014 show, which gave her the well-earned cool factor in the fashion industry.

“We wanted to book her on her merit as a model, not because she’s a Kardashian. Every bit of her success is a testament to her hard work and her passion” says Jacobs

Kendall Jenner wanted to be a model from the age of thirteen and she has made it happen, although with help and advantages. She also has a contract with Estee Lauder.

“This is a career—I want this to last for a long time,” she says. “Not that I won’t venture out and do other things, but I want this to be like a Cindy Crawford thing: I want it to last until I am her age. That’s why I love her so much and why I look up to her: Her life now is something that I want my life to be like” said Kendall Jenner.

Kendall Jenner is different from her Kardashian sisters in that she is not famous for fame sake.

“She had her eyes focused on exactly what she wanted to do, and she made it happen.” Said Kim Kardashian

In this quote from Khloe Kardashian, she reveals the hard work that Kendall has put into her modelling career to make it the success she has become

“I wish people realize how many sacrifices you have made. How many family events you had to miss out on? How many times you weren’t able to hang out or do the normal social thing at 20 because you were working. How many things you’ve missed out on because you have been focused and prioritizing. The endless times you were homesick and lonely” writes Khloe Kardashian

Although there is criticism about Kendal Jenner as the cover of the September Issue of US Vogue, she clearly has worked hard. She has a modelling contract with Estee Lauder and has modelled for Chanel, Givenchy, Donna Karan, Marc Jacobs, Victoria’s Secret and Dolce and Gabbana. These names are clearly of good taste and highbrow fashion houses proving Kendall has re associated herself from Kardashian girl to Vogue girl.

Our 5 minute “Web-Doco’s” are the perfect way to learn about and explore our content before you buy the books. Click below to view Fashion Industry Broadcast’s Web-Doco on Kendall Jenner. 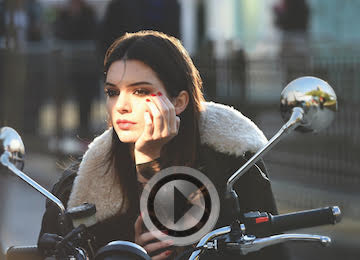