For musicians, having a sound is something, but you’re not just selling your music, you’re selling your brand. Wearing skin-tight women’s pants and painted nails, 23-year-old Young Thug is defying gender stereotypes and agitating the way hip-hop defines black masculinity, through his eccentric sense of style.

Young Thug burst onto the music scene in 2013 with his own signature sound and style, completely unmatched by anyone else in the industry. But, what was particularly interesting was the artist’s look and personal style that came with that sound. Young Thug is a slender, 6’3” gangster from the gritty underbelly of Atlanta’s southside, and matches his assault rifles and dreadlocks with skinny-jeans and women’s dresses.

The release of his most recent body of work, Jeffery, presented a historical style moment in itself. The rapper is featured on the front of his own album cover, wearing a lavender, floor-length, ruffled dress – with matching bonnet. The Fader report that Thug first saw the outfit by emerging Italian designer ‘Alessandro Trincone’, while judging entrants for the upcoming VFiles fashion show. Appropriately, the collection was about breaking down ideas of male and female constructs, introducing a new meaning for masculinity. “I think in his cover image that he exactly (captured) the point; my point,” said Trincone over email. “Everyone can wear whatever they want to. Everyone can be themselves.”

Young Thug has always projected a strong sense of personal style. Skin-tight skinny jeans, and diamonds of every colour layered on top of one another. In what’s arguably his greatest accomplishments within the fashion world, Thug starred alongside dozens of other faces in Calvin Klein’s #MyCalvins campaign. Young Thug stands among fashion giants in his signature gender-bending style, wearing women’s clothing in the ads. The slogans accompanying his images were similarly rebellious, where others ‘flaunted’, ‘dreamed’, ‘lusted’, Thug wrote “I disobey”, and “I am not what you think I am” to accompany his two images. In a brilliant juxtaposition, he was pictured in both a womenswear look consisting of long pinstriped dress over trousers, topped off with a large necklace, and a men’s suit. 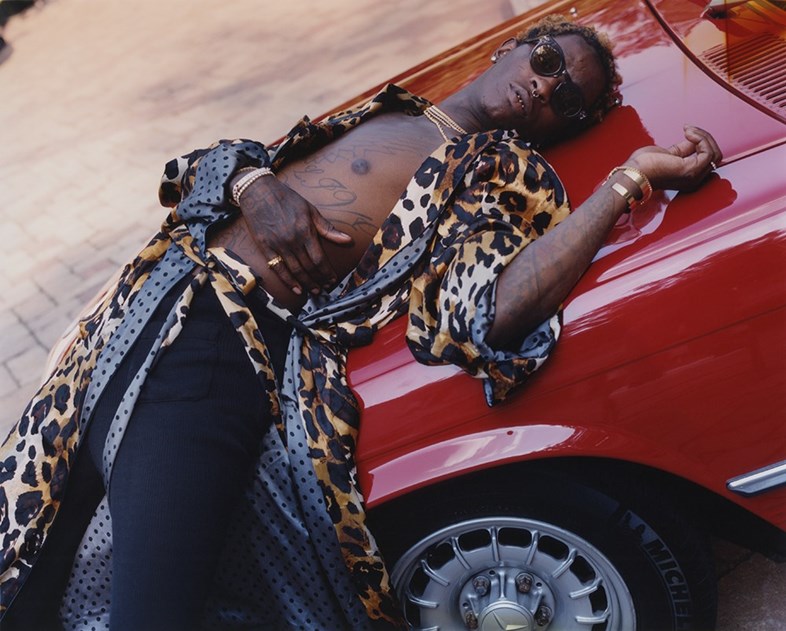 “One thing you gotta respect about Young Thug is his fearlessness,” one person tweeted. “It takes a lot to be yourself unapologetically. You don’t have to agree.” “We gon’ look back at ‘Jeffery’ as one of the albums that moved the culture forward,” tweeted another.

Like Taylor Swift’s high-waisted skirts, and Justin Bieber’s ripped jeans and faux vintage metal tees, the fashion tropes surrounding musicians play a part in how society define them. Rapping about money, haters, women and drugs just isn’t enough to make it in this rapidly chaning industry.

Where Bowie flirted with the lines and rules of gender at a time dominated by the crotch hugging masculinity of rock, Thug’s wardrobe is defined by the same fearlessness, albeit in a context of a different masculinity, one that’s stereotyped by hoodies and chains. Thug’s flamboyant eccentricity isn’t tied to sexuality. Instead, his chameleon-like style is about fearless self-expression, and he looks as natural in a velvet Puma tracksuit as a floor length gown.

Thug’s release completely subverts the traditional rap/hip hip album cover signatures, having more in common with David Bowie’s famous 1971 cover for The Man Who Sold The World, where he lounges in a chinoiserie silk dress on a chaise longue. Like David Bowie, Prince, and Lenny Kravitz before him, Young Thug is indeed a rock star. But, due to hip-hop’s rampant homophobia and society’s patriarchal stronghold on defining gender roles; there’s an ongoing debate about his sexuality.

Where Bowie flirted with the lines and rules of gender at a time dominated by the crotch hugging masculinity of rock, Thug’s wardrobe is defined by the same fearlessness, albeit in a context of a different masculinity, one that’s stereotyped by hoodies and chains. Thug is expanding our expectations of what a rapper can be and how they should look. Thug may not be gay, but with every skirt he puts on, he breaks down ideas of rap chauvinism a little bit more, proving that there is space for both skirts and streetwear in the genre.

The bravery of Young Thug is forcing society to rethink the idea of what’s normal, what’s hip-hop and challenging fashion myths and expression of sexual preference. Young Thug is a style icon, and we need more DGAF heroes like him.