Described as the “Super Bowl of social fashion events” by former Vogue editor-at-large André Leon Talley, The Met Gala has a different thematic experience each year. In 2017, and for the second time only, the theme will celebrate a living icon, Rei Kawakubo.

The Met Gala began as a low-key event celebrating the history of fashion while raising funds for the Metropolitan Museum of Art’s Costume Institute. Since Anna Wintour took the reins in 1995 it has become one of, if not the most extravagant A-list events boasting an invitation-only guest list and $25,000 entry ticket.
The night is an official opening of the Spring Exhibition held by the Institute. Previous stand-out exhibitions include Alexander McQueen: Savage Beauty (2011) and China: Through the Looking Glass (2015). Costume Institute curator Andrew Bolton says, “one of our main goals is to promote fashion as an art form.”

In 2017 the spotlight will be on Comme des Garçons and its creator, Rei Kawakubo. A tribute to a living designer has only been done once before – in 1983 for the contributions of Yves Saint Laurent. Since the creation of Comme des Garçons in 1973, Kawakubo has been challenging the conventional values of the fashion world. Her infamously dark personality is reflected in the tantalising and provocative nature of her clothing.

Bolton says of Kawakubo that “by inviting us to rethink fashion as a site of constant creation, recreation, and hybridity, she has defined the aesthetics of our time.” Although regarded as a renegade Japanese designer Kawakubo herself says “I don’t think of myself as anyone special, and I would not know how to define myself”. The propelling impact she has had at an industrial and social scale suggests otherwise. 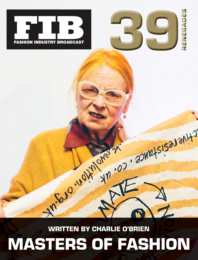 You can read the full story of Rei Kawakubo in Fashion Industry Broadcast’s, Masters of Fashion Vol 39 Renegades, available globally from Amazon.

And you can also watch the FIB 5 Minute Web-Doco here.