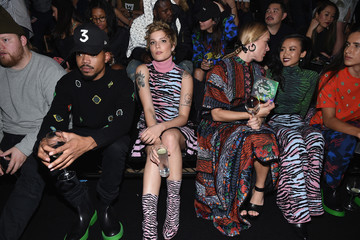 Following the hype that Chance the Rapper was to perform at Kenzo’s debut show with H&M, Ice Cube shocked spectators as he busted his tunes on the catwalk, leaving Chance in the audience alongside superstar model Iman, indie IT girl Chloe Sevigny and the shows director and fashion legend Jean-Paul Goude.

Facillitating the edgy atmosphere at Pier 36 in NYC, Ice Cube lifted the crowd with several of all time greatest hits including ‘It Was A Good Day’ and ‘You Can Do It’. Being more of a fashion ‘dance party’ the show turned out to be pretty spectacular to say the least. Check it out:

You can find out more about Kenzo the eye-catching Emperor of fashion himself by heading to Amazon to read the full story in Fashion Industry Broadcast’s, Masters of Fashion Vol 39 Renegades.

Or have a glimpse at our FIB 5 minute Web-Doco: