It’s certainly not a new notion for Marilyn Manson’s eerie videos to push the boundaries of the alternative metal music genre to a whole new level. This time, in his new preview for upcoming song and same-titled album “SAY10”, the rockstar unveils a very clear political statement… 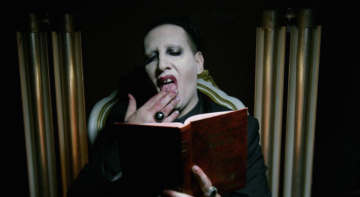 The NSFW clip, directed by American photographer, screenwriter and director Tyler Shields, showcases Manson in a dark, gloomy room where he rips apart a bible while singing, “cash is the poor man’s money”. The video ends with him standing in front of Trump’s dead body, holding a head with blond hair in his hand.

Although the message makes it obvious how he feels about the newly elected president of the United States, he refused to take part in this year’s election. As he stated for The Daily Beast, he didn’t see a big difference in the choice between “cat shit and dog shit”.