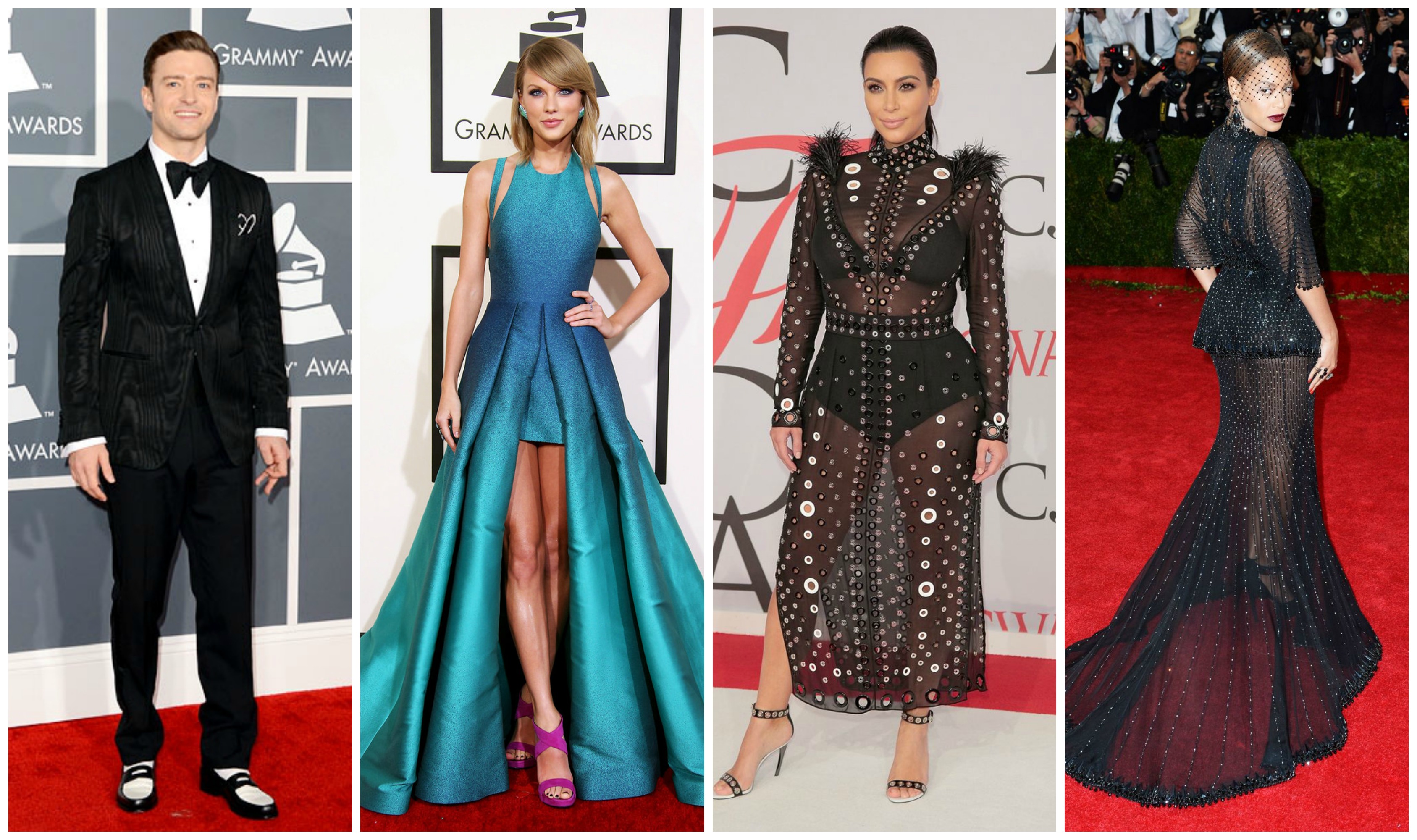 The phrase “fashion changes but style remains”, said by famed and ever-sophisticated designer Coco Chanel, can’t always be applied — at least not in the world of celebrities. Browsing through looks of the famous over the years, it is impossible not to notice that many of today’s stars were once cringe-worthy fashion disasters. But somehow instead of calling the fashion police, the fleets of celebrity stylists and make over artists in Hollywood helped them clean up their fashion missteps and were transformed into bona fide fashion icons.

Here, FIB takes a little trip down memory lane to see some rather amazing style transformations; see our favourite stars go from rags to riches. 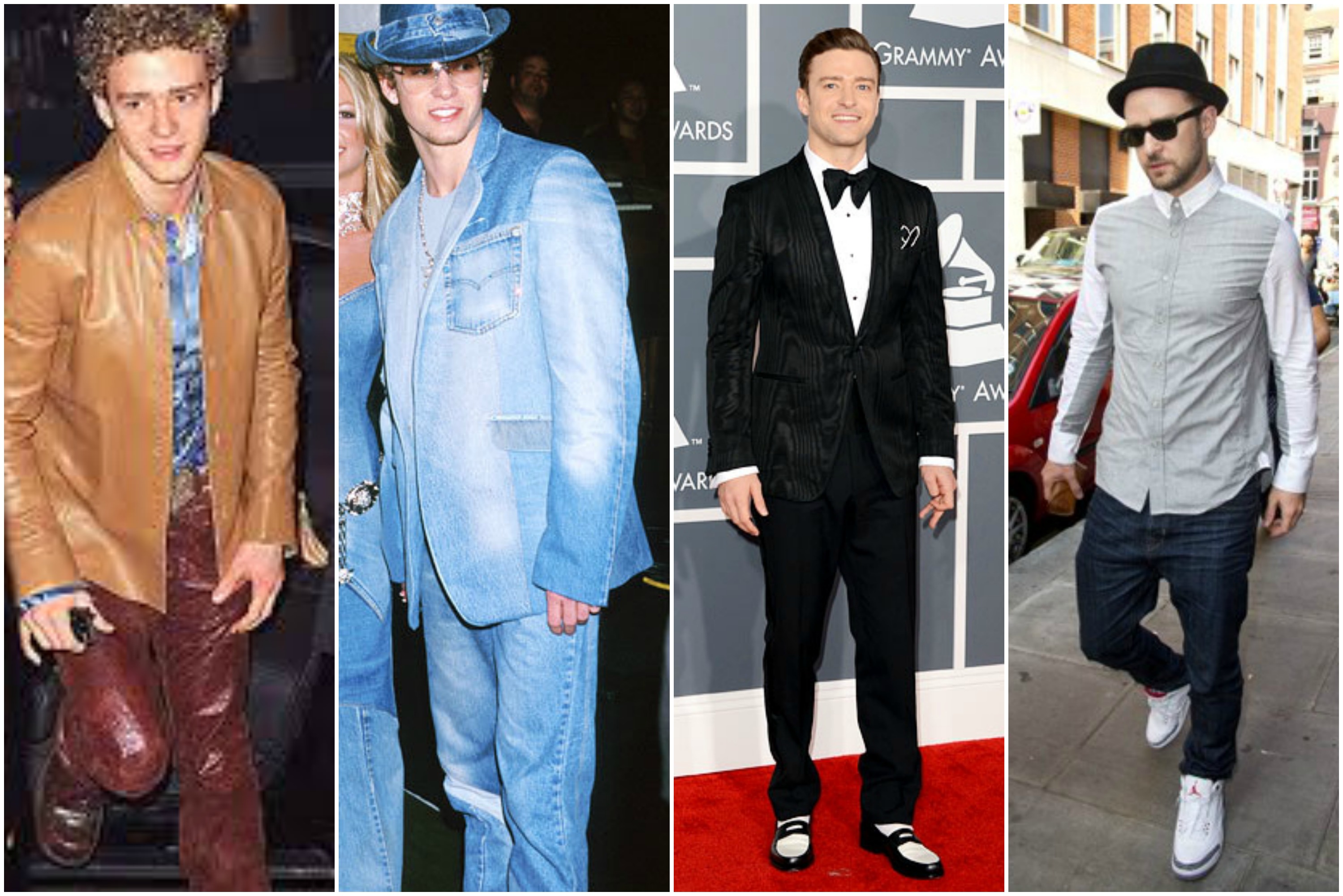 No man has changed his style quite as dramatically as Justin Timberlake has. The 90s and early 2000s were not kind to him and his N’sync band mates. Sporting noodle-like curly blonde hair, bandanas, leather pants, and shiny jackets, let’s not forget the fashion no-no denim on denim look, too.  Who can forget the infamous Canadian tuxedo he and Britney dared to wear on the red carpet together?

But since becoming a solo artist, Justin found his perfect outfit, a classically sharp suit and tie (it’s no coincidence he has a song with the same name). He also starts to wear more neutral colours like grey, black, white and even sometimes nude. Since 2011, the singer has worked with renowned personal stylist, Tom Ford — he’s designed looks for J.T for several events and tours. Ford shared with fashionista, ”Justin has great personal style and knows what he wants which makes designing for him an absolute pleasure.” 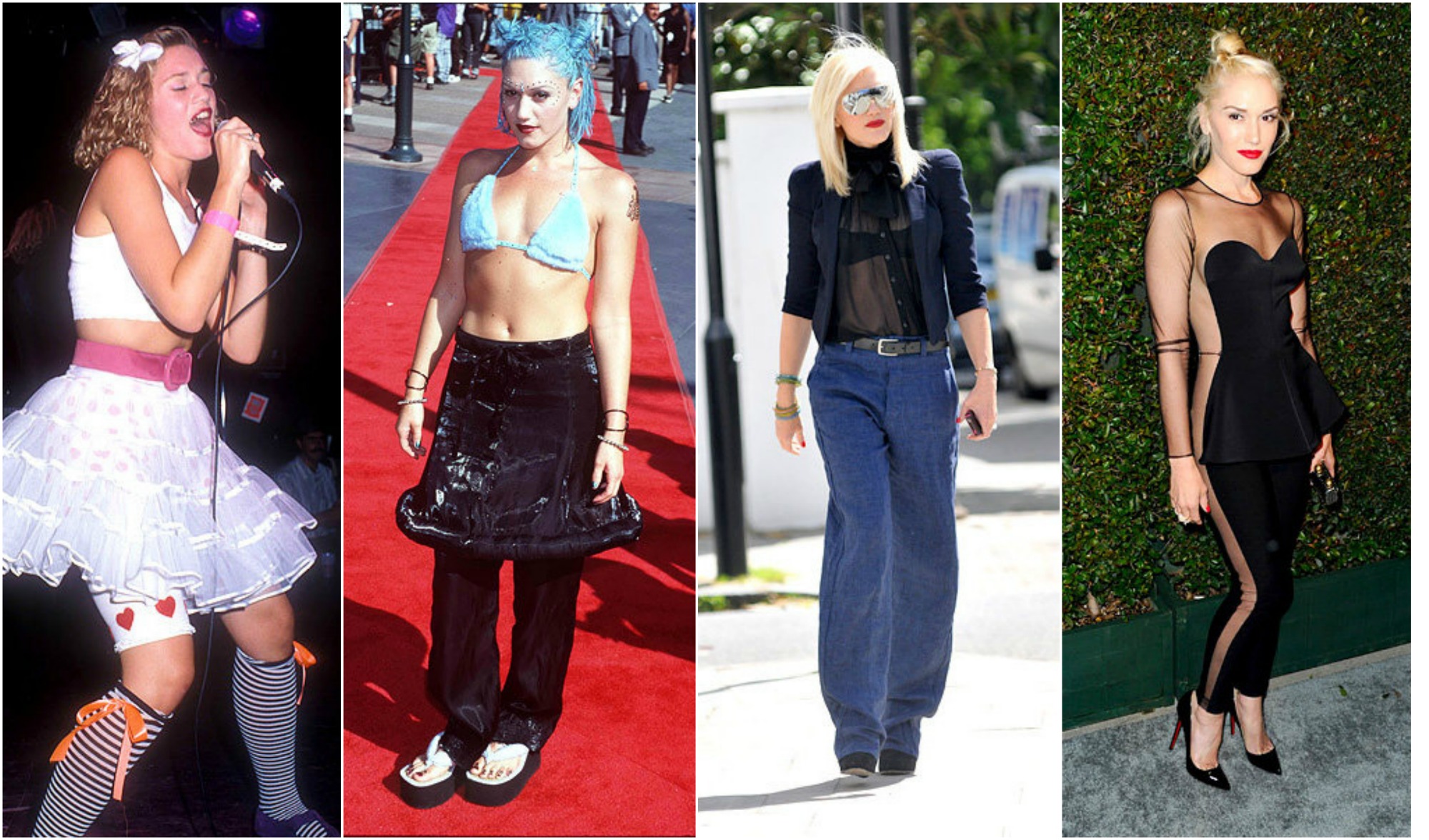 Gwen Stefani
When Gwen Stefani appeared on the scene with her punk-rock edge sporting outrageous designs, there was no doubt that her unique style would make her one of the most iconic trendsetters in the music industry. Back then in her early days, a lot of people didn’t understand her taste in fashion, but this never bothered her. Oversized and leather pants, platform flip flops, and tank tops were her favourites choices.

Over the passing years, she didn’t abandon her particular style, but she has certainly improved on it.When performing in concert, she still shows all her sassy style, but on red carpet and real life she chooses more classical outfits with lace, transparency, generous plunging necklines and her signature red lipstick. Also, in 2013, she became more than just a style icon and debuted her own brand, L.A.M.B. 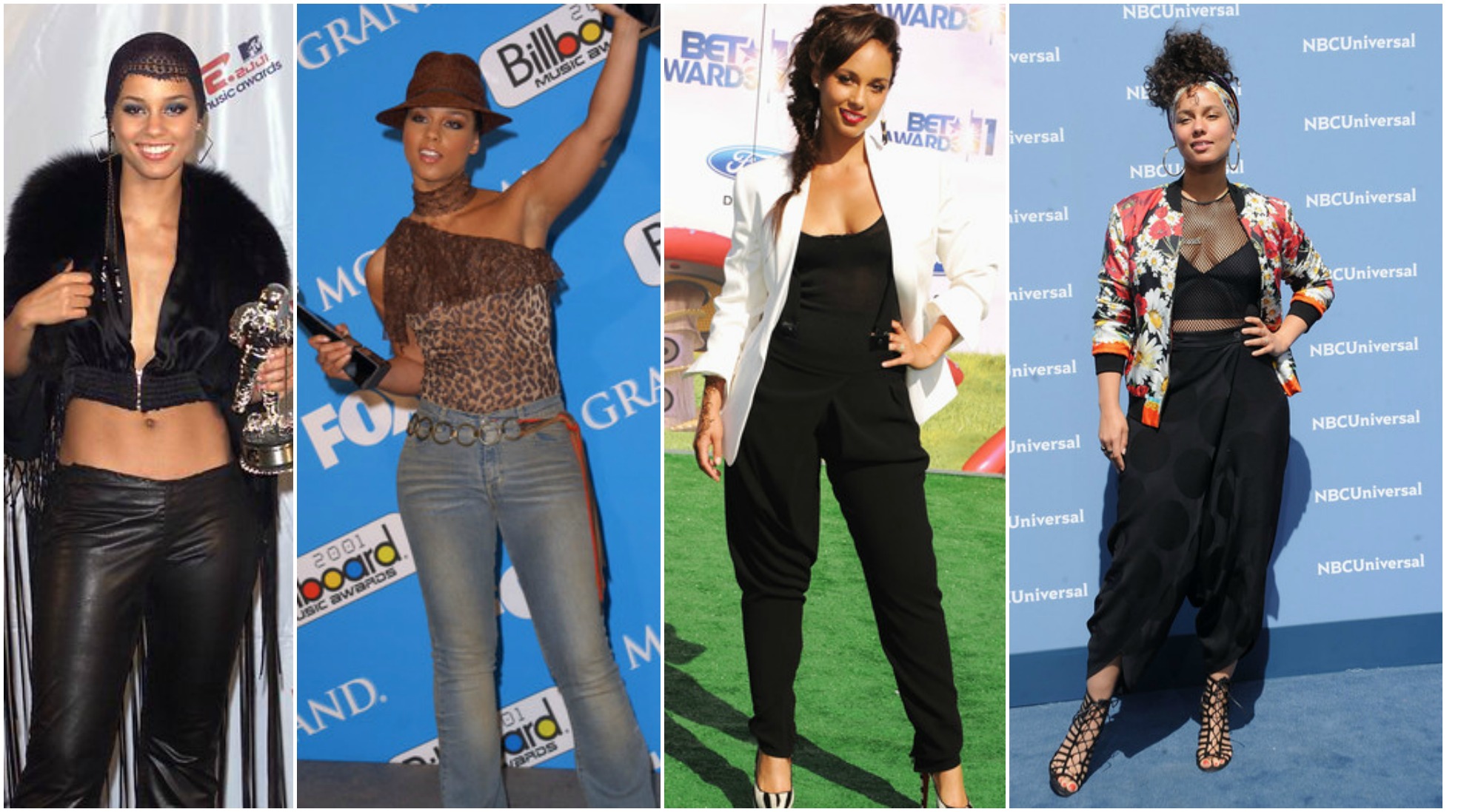 Alicia Keys
Hats, beaded-braids and low-rise jeans… when Alicia Keys stormed into music scene, she had a style of her own. Her taste existed somewhere between hippie and hip-hop, feminine and tomboy. She used a lot of head scarves, fedoras and decorative belts with no regrets, and often mixed everything at the same time.

Her look was unique and very important for the begging of her career, but thankfully Keys upgraded to a much more sophisticated style. She ditched the braids and now exudes style more naturally. The head accessories are still her thing, but she is using more plain colours, relaxed clothes and no makeup at all.

“I swear it is the strongest, most empowered, most free, and most honestly beautiful that I have ever felt,”she wrote for Lena Dunham’s newsletter, Lenny, “I don’t want to cover up anymore. Not my face, not my mind, not my soul, not my thoughts, not my dreams, not my struggles, not my emotional growth. Nothing.” 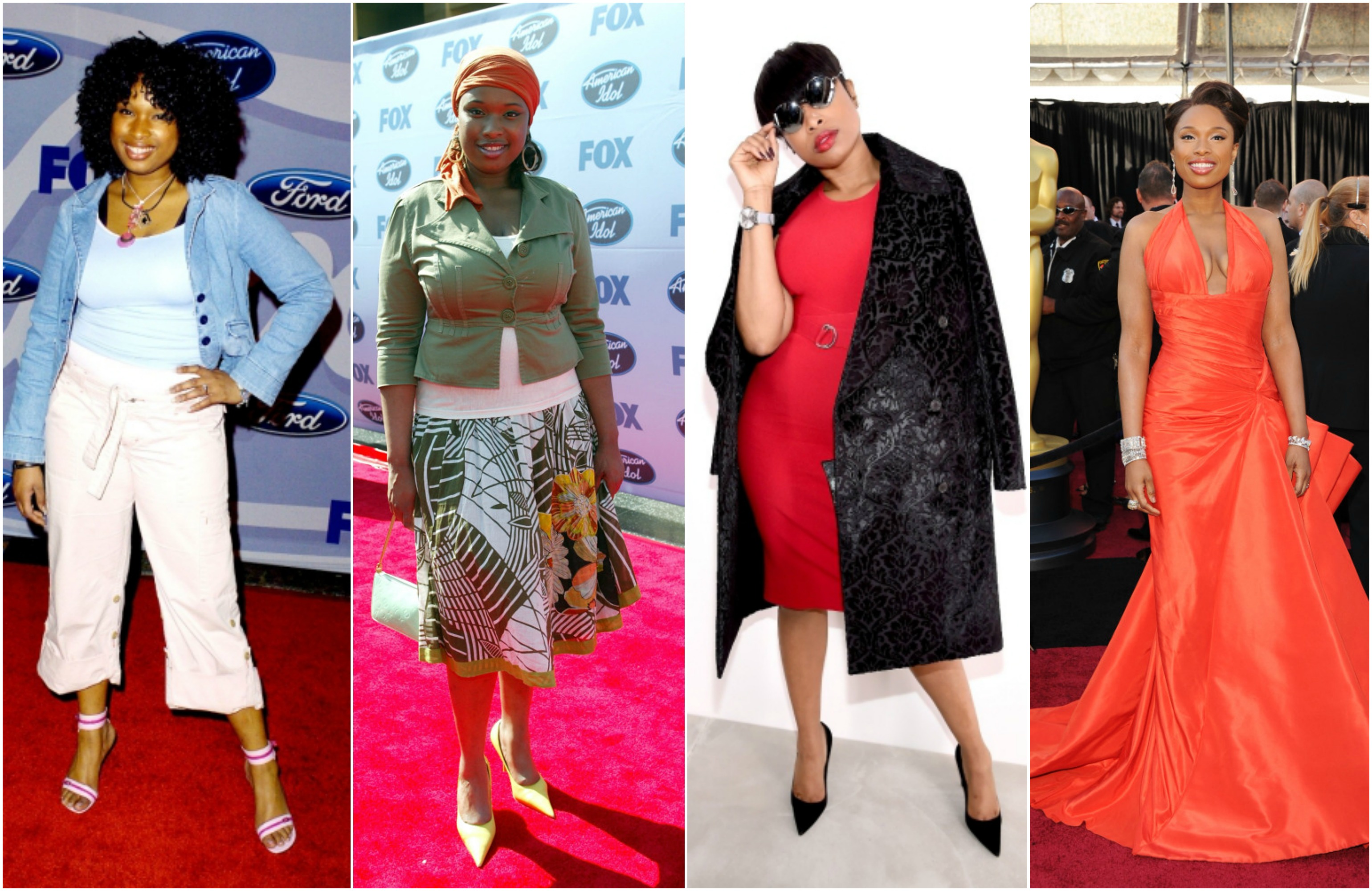 Jennifer Hudson
Jennifer Hudson’s fashion was always a point of criticism for Simon Cowell on American Idol back in 2004. Hudson had notoriously bad style, always choosing clothes that were unflattering for her shape. Her outfits were one size too small, and she had a taste for mixing colours and prints.

After she was nominated for awards at both the Golden Globes and Oscars for her performance in the movie Dreamgirls, Jennifer completely changed the way she dressed herself. Her style can now be described as classic and chic with pieces that flatter her body type, such as a-line skirts, cute blouses, frocks and blazer. Since then, J-Hud has become a darling for designers like Versace, Cavalli, and Vera Wang. 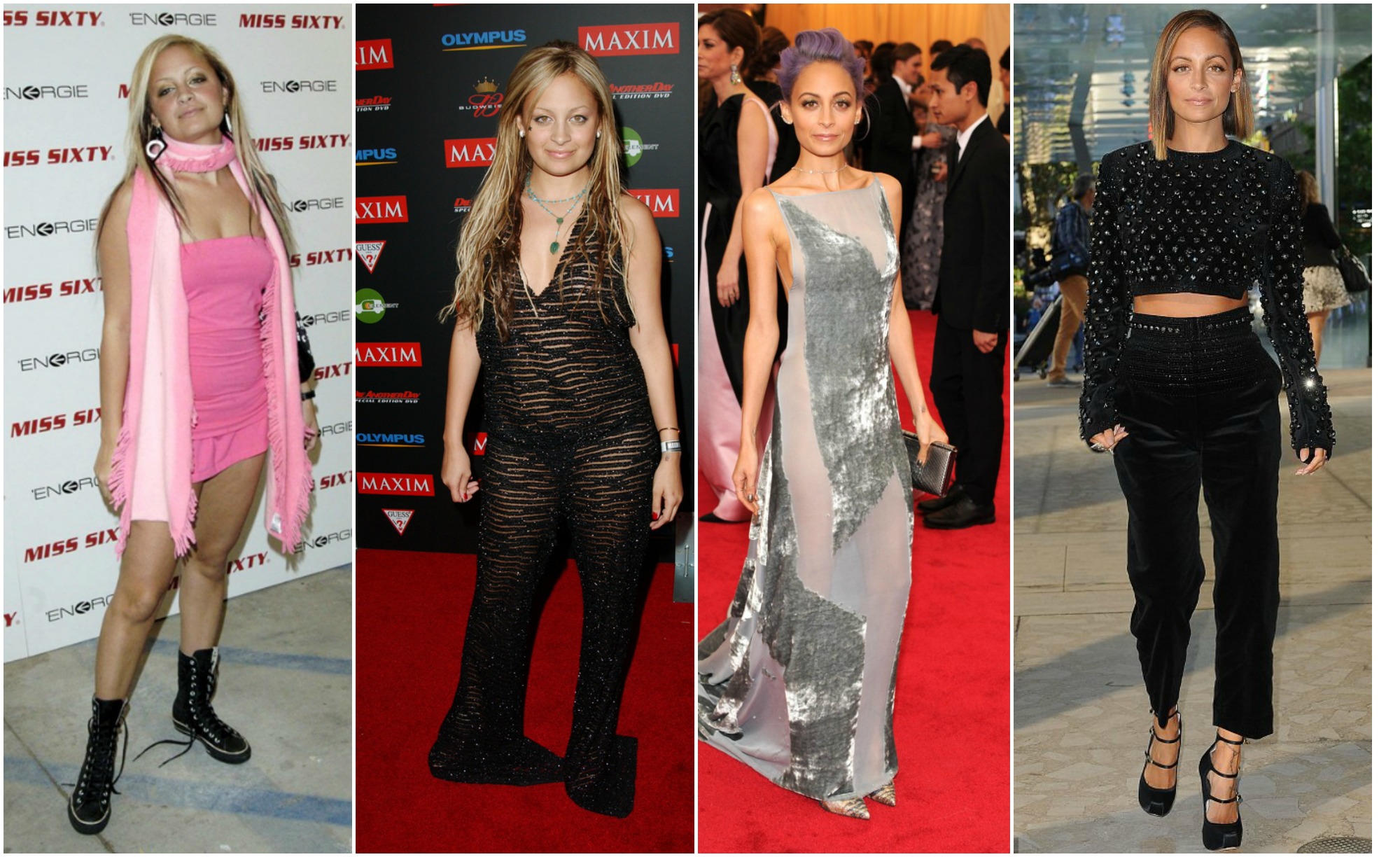 Nicole Richie
Nicole Richie is one of the most famous ‘it girls’, and everything she wears becomes a trend in the fashion world. Oversized sunglasses, colourful hair, slip dress and a boho style… she is a style icon in the fashion world now, but her image was not always so great. In the early 2000’s when she launched her reality show “The Simple Life” with then best friend Paris Hilton, she had her particular style that was a far cry from her boho chic look today.

Velour tracksuits, Von Dutch hats, skunk hair with extensions and belts over blouses are some trends that she and Paris Hilton were renowned for back then. “That period in fashion was so funny. As I grow and evolve and change, my eye does, too,” She was quoted as saying to Refinery29. And we would have to say thank God! Thankfully, Nicole has improved her style and became a designer of two brands, House of Harlow 1960 and Winter Kat. 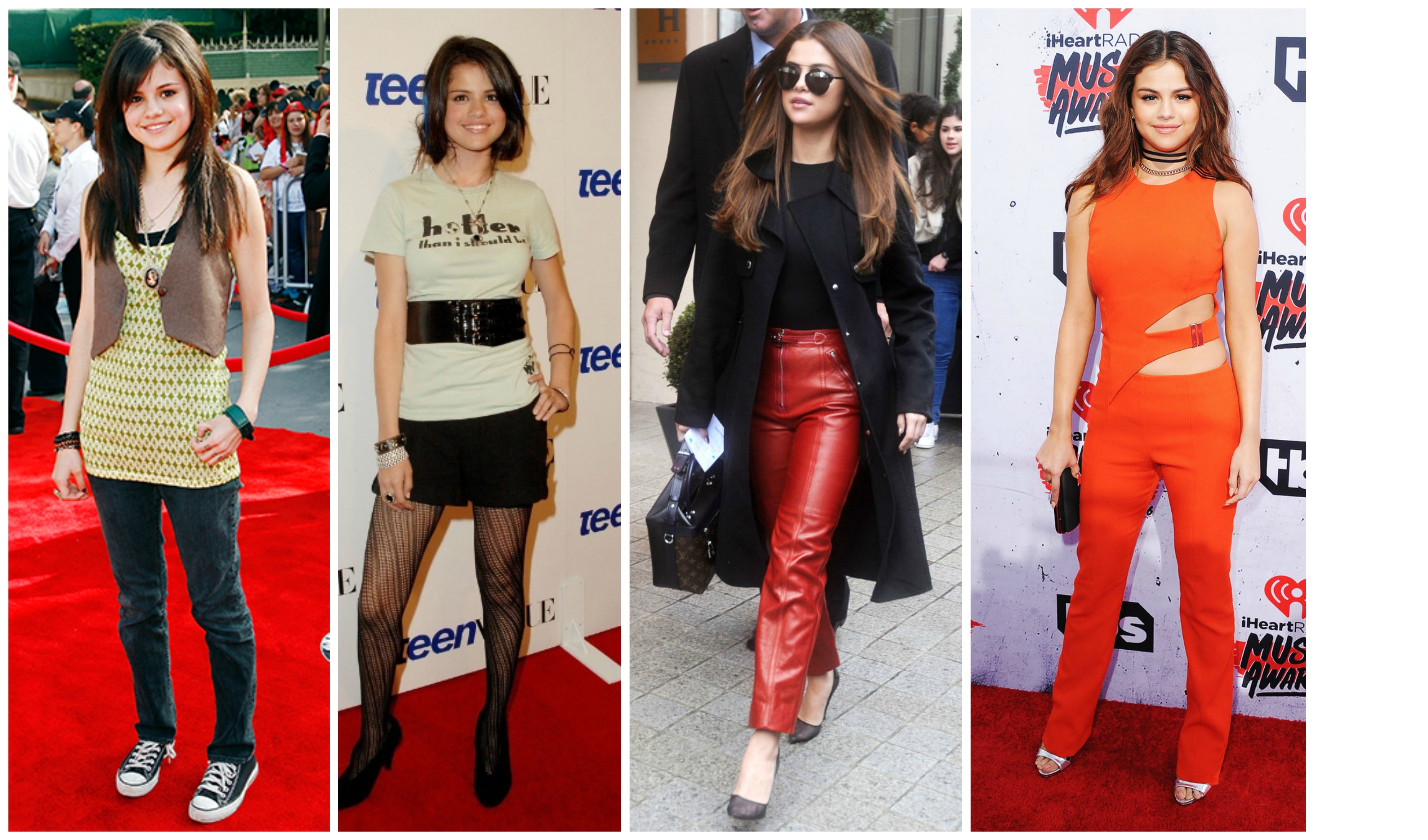 Selena Gomez
Selena Gomez has been famous since childhood, and that means her style has grown up, too. From wearing Converse sneakers on red carpet to being one of the favourite stars of brands like Louis Vuitton, her style has improved immensely. The singer and actress used to wear relaxed clothes with a heavy rotation of jeans, t-shirts, jackets and boots.

Now, we can only describe her wardrobe as chic. Cut-off jumpsuits, leather pants, stunning dresses, trench coats and a lot of skinny jeans, these sophisticated pieces are what she can usually be found dresses in. 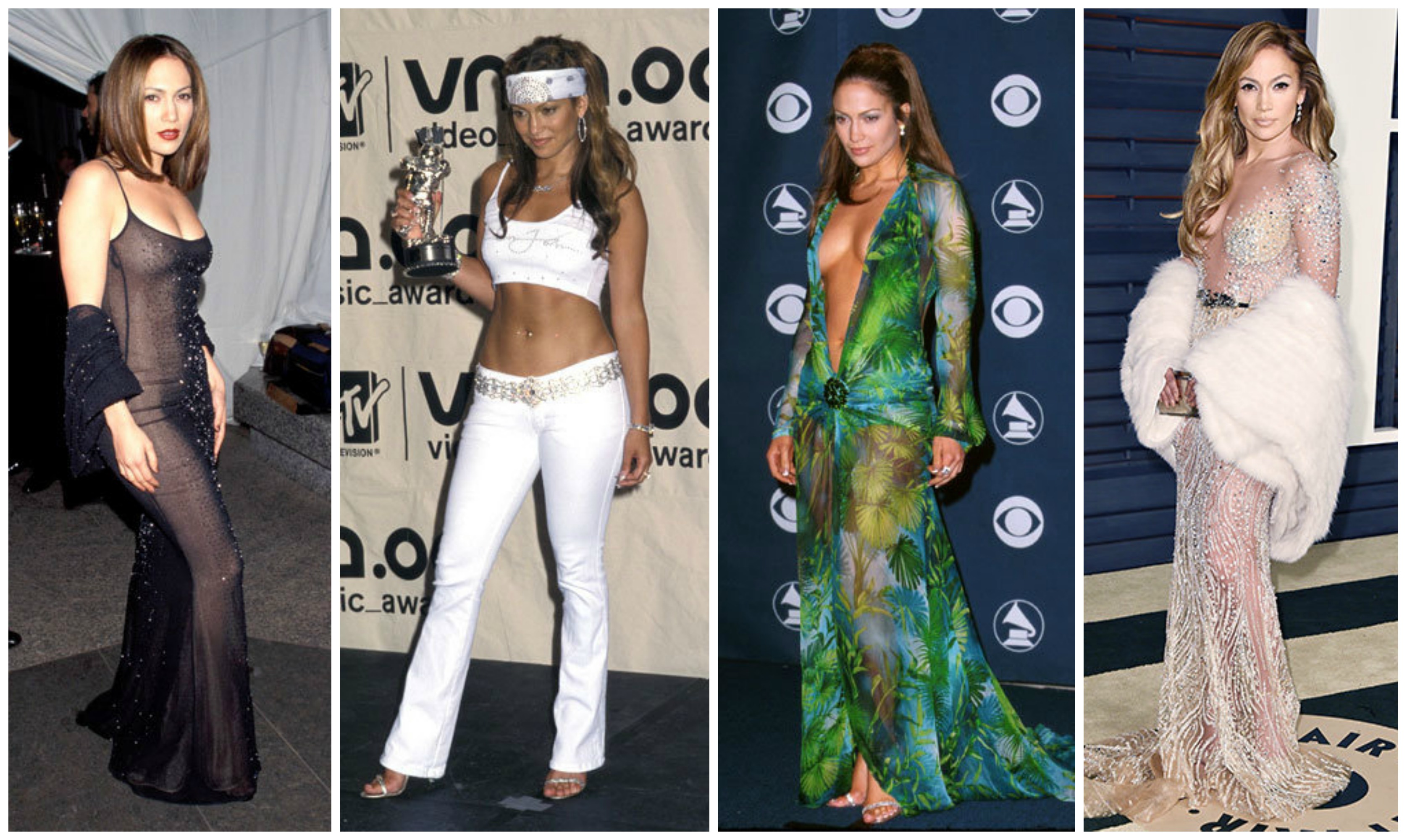 Jennifer Lopez
Never be afraid to try something new could be the Jennifer Lopez’s motto. Since she became famous in the 90s, the singer and actress has been in the spotlight for her outfits. From the Latin curly haired girl to the hip hop babe and sexy outfits, JLo liked to dare the fashion critics.

Her style obviously matured under the same spotlight. Her personal taste is still sparkly, powerful, sexy, and inimitable, but now its also chic. She is a master of the naked dress and clothes that accentuate her body shape. One of her favourite designers is Versace, and the label was responsible for one of her most iconic looks ever: the plunging green silk chiffon dress, which she wore during the 42nd Grammy Awards ceremony. This dress was described as a turning point in designer Donatella Versace’s career after the death of her brother Gianni Versace, and it was chosen by fashion journalist Lisa Armstrong to represent 2000 in the Fashion Museum of Bath’s Dress of the Year collection. 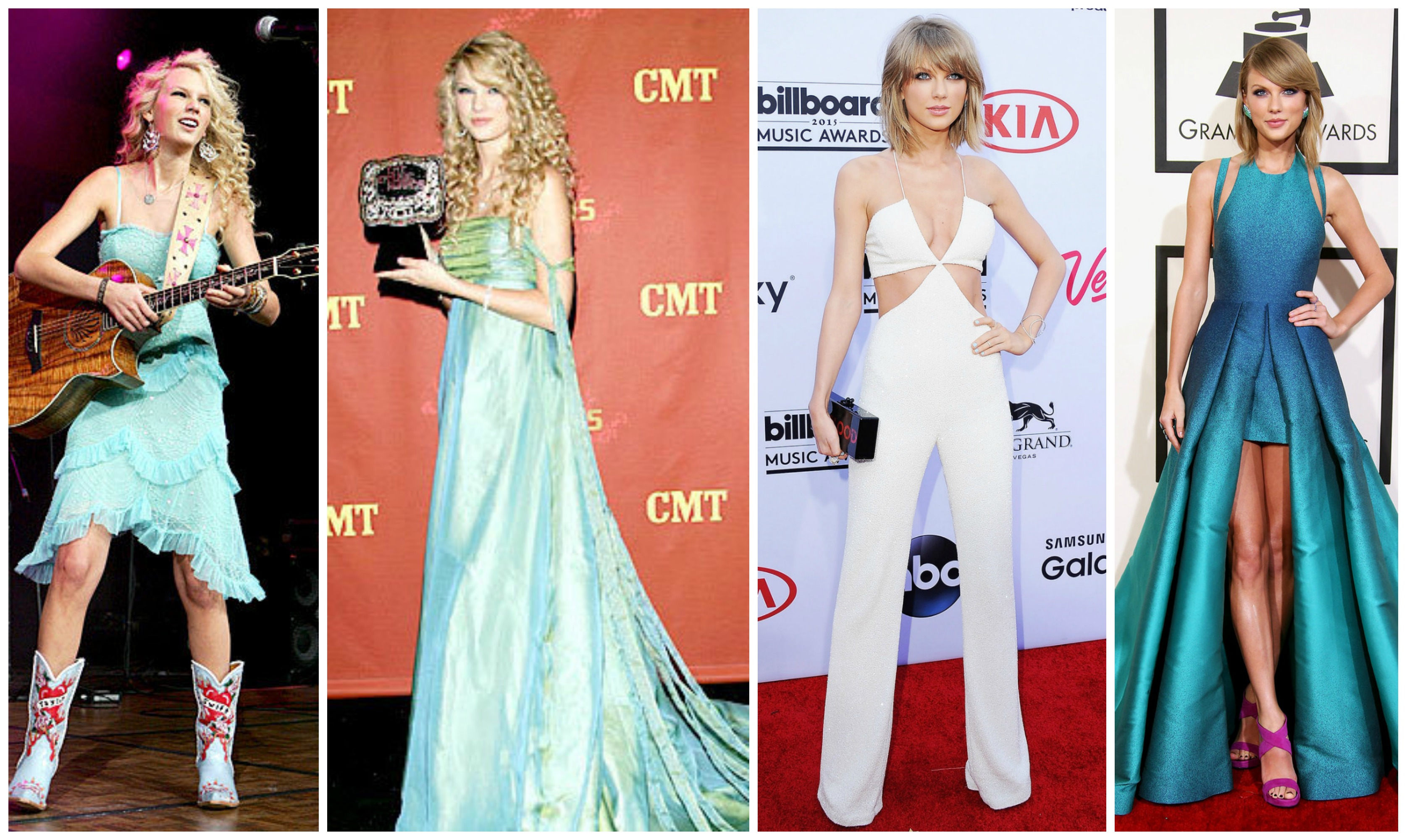 Taylor Swift
From country darling to ‘it girl’, Taylor Swift’s style has evolved as much as her music. Flouncy dress with cowboy boots was her typical outfit when she first hit the bigtime, but in the last years she has matured a lot through her choice of wardrobe. But she doesn’t regret a thing. “Going through different phases was one of my favourite things about fashion. I love how it can mark the passage of time. It’s similar to my songs in that way — it all helps identify where I was at in different points of my life,”the singer said to Vogue.

Swift cut her hair into a sharp bob and became the leader of her squad, which includes fashion icons like Karlie Kloss, Cara Delevigne, Blake Lively and others stunning girls. Now, she can be found in more trendy and sexy clothes like the flared white, low-cut jumpsuit with sexy side cut-outs that she wore on Billboard Music Awards and that memorable legless Mary Katrantzou jumpsuit. 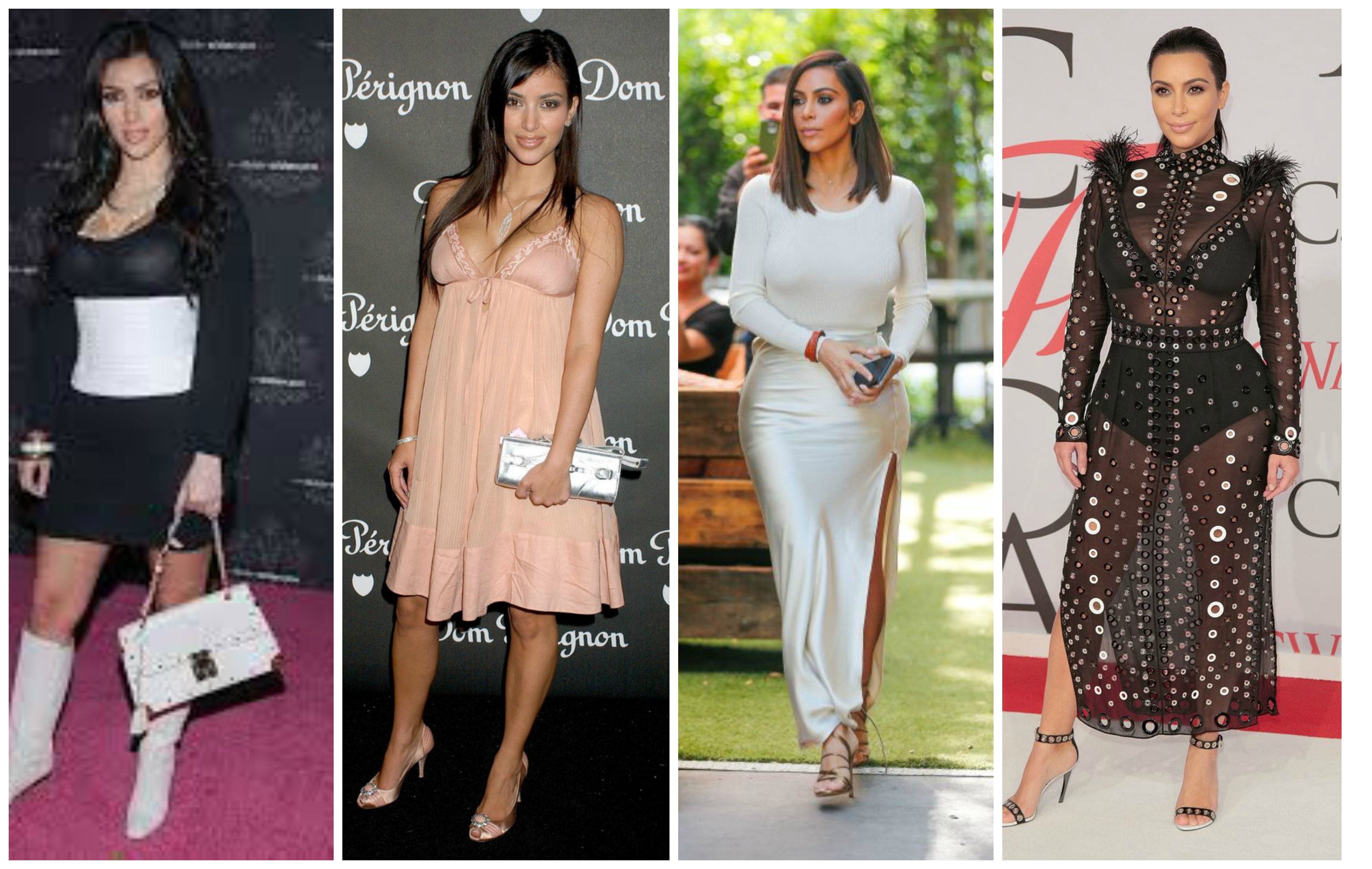 Today she is an icon of fashion, and is always in designer looks that keep people talking about her. Riccardo Tisci and Olivier Rousteing, designers of Givenchy and Balmain respectively, are personal friends of Kim. In fact, Kim even wore a haute couture gown by Givenchy when she wed Kanye in 2014. 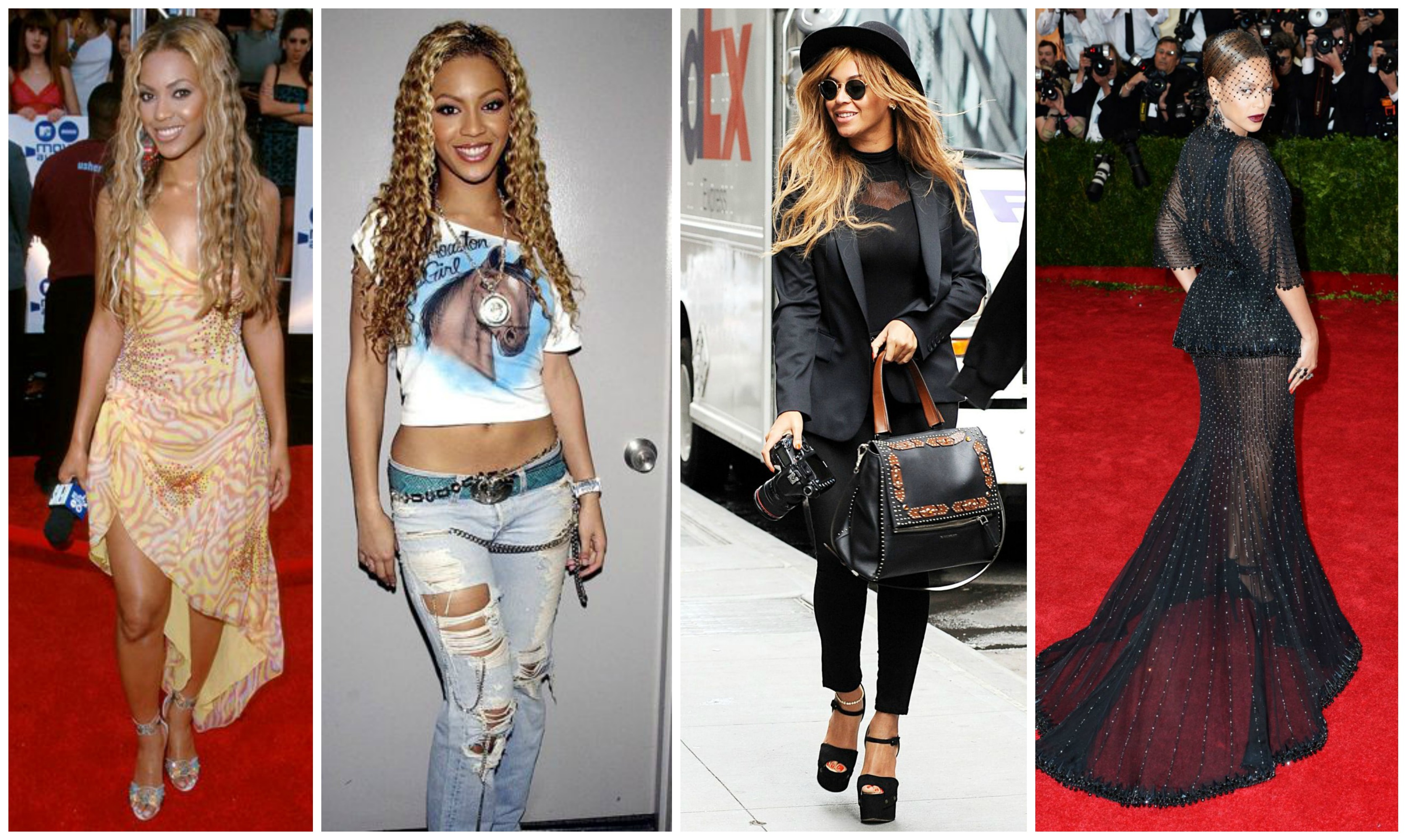 Beyoncé
From her early Destiny’s Child days to today’s diva outfits, Beyoncé has made her way onto most best dressed lists and has quickly become one of our favourite celebrity style icons (alongside her many musical achievements). Everything she wears becomes a trend — her wardrobe is full of colours, naked dresses, pantyhose, Bordelle bondage corsets and outfits that highlight her ‘bootylicious’ womanly frame.

However, before she launched her solo career, the singer made some rather bad outfit choices. When she was in Destiny’s Child, her mother Tina Knowles was responsible for the group’s outfits. Usually, she created matching stage ensembles with a lot of sparkle and colourful prints. Thankfully, those days are over and ‘Queen B’ now rules the world of celebrity fashion.