Plane food can often turn you off flying, but if you are blessed enough to be a Victoria Secret supermodel, then you’re in for some pretty delicious onboard bites.

The Victoria Secret models who will be walking in this year’s runway presentation recently flew from New York to Paris where the show will be taking place this year, and we were lucky enough to get a glimpse of how it would feel to fly like an angel.

As we would expect, they got the first class treatment with each seat containing a comfort kit and a Victoria Secret blanket. But what really shocked us was the in flight menu — angel Martha Hunt posted it on Instagram for all to see, and we can’t deny our jealousy.

The girls were offered a huge selection of food from pre-departure snacks to french macaroons for dessert. For breakfast, the girls had a choice of an egg white omelette, oatmeal, or whole wheat blueberry pancakes with fresh blueberries and maple syrup. Next up on the menu was pan seared lemon herb chicken breast, filet mignon or a kale and quinoa salad. If you can believe it, there’s more: a cart with snacks including nuts, chocolate, fresh fruit and pastries were also available before and after take off.

Oh, and let’s not forget the champagne!

That certainly sounds better than the wilted salads and soggy vegetables that we are used to putting up with on planes. But these girls aren’t the only models that eat well on flights —model Zoe Huxford has said that she never eats plane food, and instead opts for bringing her own snacks on the flight, including fruit and nuts.

Lindsay Ellingson also recommends drinking a fresh cold pressed juice before hopping on a flight. A combination of ginger, cayenne and lemon is her go-to, which is a super healthy and appropriate pre-flight pick as the ingredients boost your immune system and settle your stomach before a long flight.

Well I don’t know about you, but maybe next time I fly, I will stock up on healthy snacks so I don’t have to suffer through the standard plane food and feel just a little bit closer to being a Victoria’s Secret Angel myself! 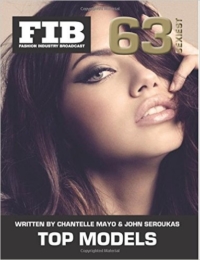 To read more about many of Victoria’s Secret top models, check out the book featuring the sexiest girls on Amazon.