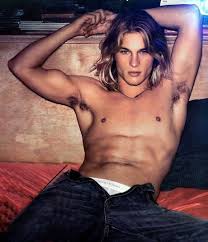 Before the series Vikings, many people probably wouldn’t recognise Travis Fimmel with his clothes on. He previously shot to fame posing on traffic-stopping billboards in nothing but a pair of Calvin Klein underwear.  The Australian became a famous model after gaining attention for his six-figure modelling deal with the american brand. But this was`t enough for him.

His modelling career first began when he was spotted working out at a gym in the Melbourne by the flatmate of Matthew Anderson, a talent scout for the prestigious Chadwick Models agency. He headed overseas and was signed with modelling agency LA Models.  Since then, he stared in a lot of magazine covers, fashion campaigns and made appearances in Janet Jackson and Jennifer Lopez’s music videos. Fimmel was also named one of the world’s sexiest bachelors by America’s People magazine in 2002 and at the time was regarded as “the most in-demand male model in the world”. He was so popular that some journalists suggested that he was the inspiration for Sex and the City heartthrob ‘Jerry’ Smith Jerrod.

Fimmel openly admits he hates modelling and he hasn’t given up on his goal of acting. He took drama lessons for some time until he got the leading role on Tarzan the TV show. After that, he proceeded with smaller roles on series and films like The Beast and Surfer, Dude with Matthew McConaughey and Woody Harrelson. In 2013, he had the biggest opportunity of his career when he was chosen to play Ragnar Lothbrock in Vikings the historical drama television series written and created by Michael Hirst for the television channel History.

“I wanted to do it because I’ve never seen a show about Vikings, so it was very exciting to do something nobody has ever done. Michael Hirst is such a talented man, so I was very lucky to get the job.”

Check out the full story of Travis Fimmel in the Web-Doco below!

Edited and Created by: Sally Laous

Fashion Industry Broadcast is proud to unveil our new bespoke film making division. We make rich media content for mobile devices, we create short and also feature length films and documentaries, we create and publish from our vast catalogue of art books, eBooks, apps for mobile devices. All of our book titles are soon to be available as feature length film documentaries, as well as innovative 5 minute “Web-Doco’s”. Our “Web-Doco” library alone features over 2,000 FIB titles. You can find them on iTunes, You Tube, Vimeo, and soon Netflix and Foxtel.

Our 5 minute “Web-Doco’s” are the perfect way to learn about and explore our content before you buy the books.