The glamour and romanticism of the 20s set the tone of the Chanel’s fashion show that took place last Tuesday in the gilded rooms of the Ritz in Paris. The 5-star hotel is just a few minutes away from the historic Rue Cambone’s store, however, Karl Lagerfeld made his audience feel the atmosphere of the time when Coco Chanel was commanding her brand. After all, she lived there for almost 35 years until her death in 1971.

The title of the show was “Paris Cosmopolite”. Models walked through the room, wearing the Chanel collection as they were just going to drink some tea. Models and other guest were mixed in a room with musicians and journalists. It was a real ‘soiréé’ with classic designs as two-pieces clothes, cashmere cardigans, details in tulle, a lot of pearls and camellia flowers – of course. 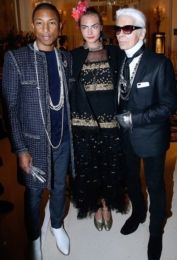 “The Ritz has always been an international place, full of elegant people, and somewhere where one could come to see elegant, modern clothes coming and going. I wanted to recreate something of that at this show today, at what I consider the cosmopolitan spot par excellence,” said Karl after his presentation to the ‘New York Times”.

Cara Delevingne, one of favourite models of the “Kaiser”, opened the fashion show while Lily-Rose Deep – daughter of Johnny Deep and Vanessa Paradis – made her début at Chanel runway. She is the face of the brand’s new eyewear range and Chanel No.5 campaign.

Singer Pharrel Willians wore a long tweed coat, combined with pearl necklaces and walked thought the dinner tables, until he decided to stop to have a tea with a lucky lady, who was sitting near Willow and Jada Pinkett-Smith. Georgia May Jagger, Sistine Stallone, Alice Dellal, Levi Dylan, and Sofia Richie were also to be seen on the catwalk Chanel’s last fashion show of the year.

See some pictures from the runway below.