Skip to content
72 designers, 4 venues, and more than 100 models in 8 days: The New York Fashion Week, which ended today, showcased the best of this fashion season's AW 2017 collections.

After years of having an overcrowded schedule, some brands decided to move in a new direction of the fashion industry. Tommy Hilfiger and Rebecca Minkoff, for example, decided to show their collections in Los Angeles, while Vera Wang made a movie for her collection, instead of having a runway show, set to be released during the Paris shows.

Ok, you could probably think that this means the New York Fashion Week might have lost some glamour. But it appeared to be the opposite: For some designers, this was the chance to be in the spotlight.

Raf Simons Made His Debut at Calvin Klein

One of the most anticipated moments of the fashion week was the debut of Belgian designer Raf Simons for Calvin Klein. Before the runway started, he was already in the headlines with his ideas for a few major changes. He didn’t only move the show to the front of the week – instead of its usual closing slot – but also debuted his men’s and womenswear shows together on the same runway, sending a clear message about the newly unified aesthetic of the brand.

Raf also chose America as a theme of his first collection. American flag colors, bandanas, sporty tailoring, cowboy boots and see-through plastic shirts with puff sleeves, as well as police-style jackets matched with badges, fur collars and classic denim are some trends Calvin Klein presented. One model even walked with an American flag tied and draped around her waist. 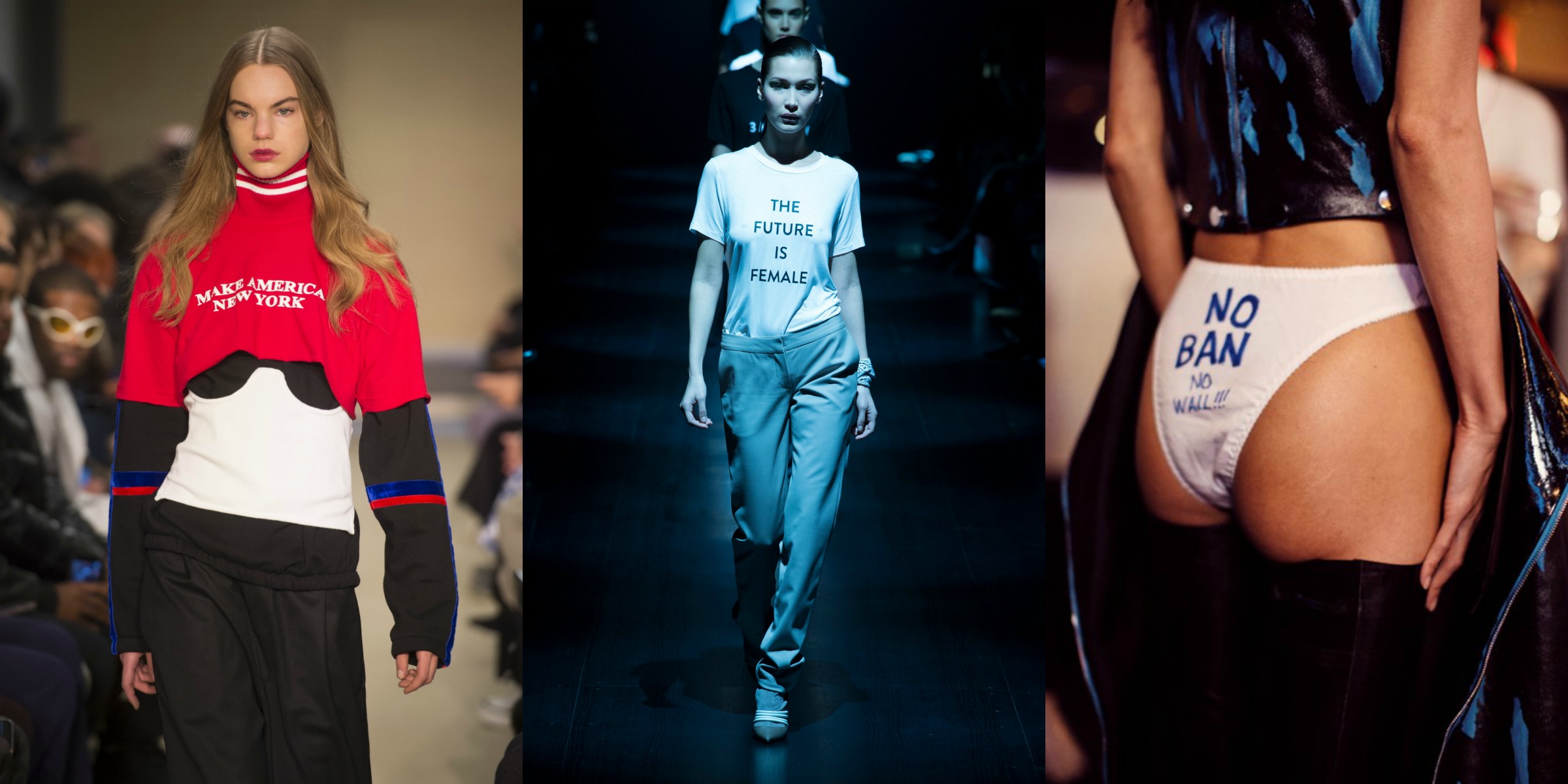 While Calvin Klein had his patriotic debut, many designers used the American election and the political scenario as a major inspiration for their collection. Raul Solis, a designer with Mexican heritage, made his opinion about Donald Trump very clear, by letting his models walk in underwear that said ‘No Ban No Wall’.

Public School’s models walked the runway donning red caps that declared “Make America New York,” while Prabal Gurung closed his runway show with each model — cast in all shapes, colours and sizes — walking the runway in a custom slogan T-shirt with phrases such as “The Future Is Female”, “Stay Woke,” or “This Is What A Feminist Looks Like.”

The New York Fashion Week also was the place to show a new format of fashion show. Fernando Garcia and Laura Kim, the new creative directors at Oscar de la Renta, introduced a different way to represent their creations. It was a kind of combination, merging their first outing for the brand with their own brand, Monse.

Although the show notes explained the way it would be presented, there was really no need for such clarification. From deconstructed shirt dressing and easy luxury from Monse, to pants, punchy colors and a more polite and classical fit from Oscar de la Renta, Fernando and Laura brought a highly welcomed freshness to NYFW.

Yeah. This is the name of Alexander Wang’s collection, but we know that if any designer knows how to throw a party, it has to be him. For years, the after parties of his shows were one of the biggest events of the season.

This year, he chose an abandoned theater in Harlem’s Hamilton Heights and an A-Team of models (including Kendal Jenner and Bella Hadid) to show his collection. On the catwalk, he explored dimensions of black-on-black (with a few pops of white, gray, and silver) leather pieces, boxy jackets, cigarette pants, and other trends.

When the show ended, the guests were still buzzing about a potential “secret” after party. The only “secret” though was that the show itself was the after party. Genius!

Check out FIB’s video roundup of NYFW above!