Skip to content
Through a career spanning over six decades, Karl Lagerfeld is a name the elicits a number of reactions all around. Whether it's his high collars, fingerless gloves and the sunglasses donned day and night, indoors and out, that white ponytail, or the fact that the man simply refuses to divulge his actual date of birth, Karl Lagerfeld is a name synonymous with the Fashion industry
https://youtu.be/DkFP4Otp3Tg

Renowned for his staggering prolificness, versatility and an insatiable appetite for creation and reinvention, Lagerfeld defies expectations. Apart from being at the helm of fashion houses Chanel and Fendi, Lagerfeld is known for having a remarkable photography career, being an advertising guru and co-author of a best-selling diet book, The Karl Lagerfeld Diet.

In 1997 Vogue crowned Lagerfeld the “unparalleled interpreter of the mood of the moment”.  He can be credited with designing costumes for theater or his own line. In 2004 in partnered with H&M for a limited range of Lagerfeld designs which sold out within two days. In 2011 he unveiled a 45 piece collection for Macy’s.

Far far away from slowing down, Lagerfeld designs twelve or so collections a year.

Check out his full story in our 5 Minute web doco Above. 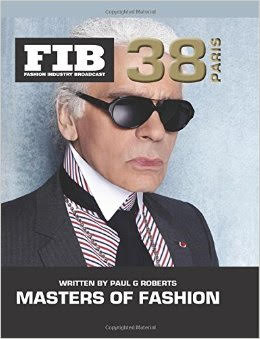 To read more about the eccentric Lagerfeld head over to FIB’s Masters of Fashion, vol 38 Paris, available from Amazon and all good bookstores.