Back in November FIB took a retrospective look at the famous 1995 “Diesel For Successful Living” campaign that transformed the brand into a global powerhouse. This month, the original photographer of one of the most striking images of the campaign, David LaChapelle reunites with Diesel once again to shoot their new campaign “Make Love Not Walls”. The 1995 campaign was historic, controversial and groundbreaking, will this iteration be the same?

Conceptualised by Swedish admen and marketing gurus, Johan Lindeberg and Jocke Jonason, the campaign broke barriers by position race, religion and sexuality in their images against anti-conservative politics and traditions. One of the most enduring and arresting images from the campaign is a black and white picture that depicts two gay sailors locked in a passionate kiss as their shipmates celebrate the end of WWII in the background. Released in the height of the Clinton administrations “Don’t Ask Don’t Tell” policy which banned LGBTQ identifying people from serving in the US armed forces, the image sent shockwaves around the globe.

Since then, David LaChapelle has gone on to build a reputation for himself as one of photography’s most distinctive auteurs, a man of unprecedented success who blurs the lines between advertising, fashion and art with his hyper-saturated, Alice-in-Wonderland dream aesthetic. A provocateur auteur at heart, LaChapelle’s work is inspired by everything from art history and religion, to surrealism and street culture, all while making cheeky and sometimes controversial social commentary. Yet, when asked to pick one image of lasting significance out of his portfolio, LaChapelle points to his image for Diesel’s “For Successful Living” campaign. He recounts an anecdote to Dazed, in which driving in the Californian desert, he stops at a small gay and lesbian bar which happens to have this particular image taped up in the bar. For LaChapelle, it “was like it being in the best gallery or the best museum in the world. It meant something to people.”

This idea that the most important art is art that makes a connection and statement is therefore central to understanding David LaChapelle’s work. It is also what makes him the ideal photographer for Diesel’s new campaign, “Make Love Not Walls”. The campaign sees LaChapelle team up with Diesel’s creative director Nicola Formichetti to deliver something that is at once political and serious but also joyous and celebratory. In one image, a group jubilantly smash down a border wall using a giant rainbow inflatable army tank while another sees a group gleefully carrying a man through a heart shaped hole in the wall complete with pink swirling mist.

One of the most enduring images from the campaign is a throwback to LaChapelle’s first iconic image for Diesel and sees two gay men kissing in front of this wall at their wedding. To add to the sheer number of crossover and boundary defying elements going on in this image, one of the men appears to be Middle Eastern and is wearing an all denim outfit complete with a denim keffiyeh and the wedding appears to be officiated by a black trans woman. This melding together of a cast of non-conforming individuals made up of different ethnicities, sexual orientations and occupations sends a clear counter-argument to Donald Trump’s message of division and exclusion.

In particular, the amalgamation of so many different people (at least on the surface) sends the message that ‘artist’ and ‘activist’ are one and the same and that each artist given a platform bears the responsibility to take a stand against injustice and oppression. It’s a message that says even the branding, marketing and advertising world, efforts can and should be made to combine the goals of sales with the goals of activism. LaChapelle is adamant that this campaign goes beyond a superficial desire to sell clothing or even a brand.

As he tells Dazed, “Nicola doesn’t want us to do an ad that’s just, ‘Yeah, we’re selling jeans…it’s not a ploy – of course we want to sell jeans, it’s a given. But at the same time, you can’t just sit by thinking this” – i.e Trump, Brexit, the rise of the alt-right etc. – “is not fucking happening. If the government is what’s threatening us, then private sector companies like Diesel are what we’ve got, and otherwise we protest on the streets. If the government is corrupt, it can only come from the private sector.”

How then do these companies respond to the criticism that their social activism is shallow or superficial at best and the lingering suspicions that they may have ulterior motives for jumping on this socially conscious bandwagon? The “Make Love Not Walls” campaign is practically built for an age of hashtags and trending topics on social media.

For Formichetti, brands have a moral imperative to promote societal values through their advertising, saying to Dazed “we have to advertise anyway, right? I have a responsibility as a brand, as a person, to use my voice to put out a positive message. So ours is about diversity and promoting equality and issues are happening in the world. We’re a big company, so it’s our responsibility to show the world the most diversity possible. That’s the minimum we have to do, you know?”

At any rate, it has become clear that fashion can longer afford to avoid commenting or turning a blind eye to the world around them. From designers refusing to dress or style Melania Trump to retailers dropping Ivanka Trump and other Trump-related brands from their stores, those in the fashion industry are being forced to take a position.

Like the Diesel “For Successful Living” campaign two decades before it, the “Make Love Not Walls” campaign defies the boundaries of gender, sexual orientation and race while pushing against conservative politics. For those cynics that cry foul when they see campaigns like this straddle the line between advertising and activism, they are missing out on the power of fashion imagery to create social awareness and to make a real cultural impact. After all, regardless of the motives behind a campaign like this, promoting positivity in times like this can only benefit mankind. Let’s not forget that selling jeans and promoting a social good does not have to be mutually exclusive. Regarding the possibility of socially-campaigns like these becoming a cliche, LaChapelle hopes they do and “everyone fucking gets on board and is like, ‘No, this is it. We’re not gonna sit by.” In this day and age of Trump, art and fashion can longer get away with being apolitical or silent in the face of oppressive and reactionary policies and speech acts. LaChapelle reminds us that the only way to make meaningful art now days is to make political art and that the best possible message to send is one of love and unity. The world is watching. 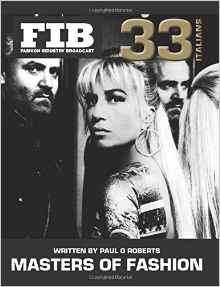 To read more about Renzo Rosso and Diesel’s interesting history, check out FIB’s Masters of Fashion Vol 33, available now from Amazon and all good book stores.

And to read our November feature article on the Diesel “For Successful Living” Campaign HERE!