The monarchs of the horror, action, science-fiction and supernatural realms have united once again. This time it is to bring the fictional world of Castle Rock from the pages of author Stephen King’s books to our TV screens.

News on the show is scarce at the moment, as the project is still in its infant stages and is slated to begin production this year. What we do know is that the show is the brain child of author Stephen King and producer J. J. Abrams whose name can be attributed to the success of films like Armageddon, Star Trek and Star Wars.  Sam Shaw & Dustin Thomason developed the project for television, and appear as executive producers. Along with  Abrams, Ben Stephenson and Liz Glotzer they will be working behind the camera. The series will be a Bad Robot Productions in association with Warner Bros. Television.

If the name of the show sounds familiar, you could have come across it in one of King’s book. Castle Rock is a prominent fictional world that appears in a lot of his works like Cujo, The Dark Half and Needful Things. The news of the show first broke on twitter through a set of two ominous and rather cryptic tweets. The first tweet was by the production company, which was followed by one from the famed author himself. 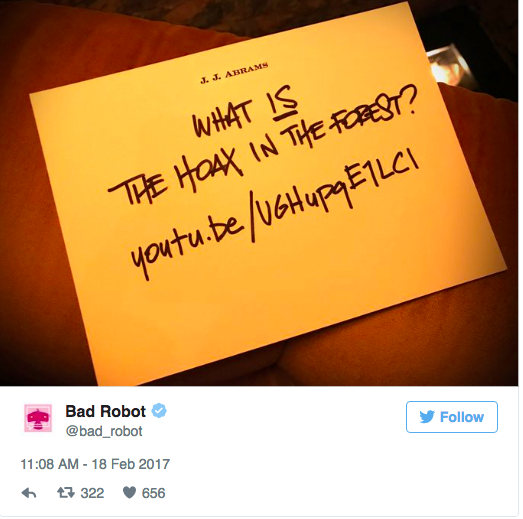 An official synopsis released in a  HULU press conference states that the show will be:

“A psychological horror series set in the Stephen King multiverse, Castle Rock combines the mythological scale and intimate character storytelling of King’s best-loved works, weaving an epic saga of darkness and light, played out on a few square miles of Maine woodland.”

Die hard fans of the author hope to see some of his iconic much-loved stories on their TV screens. If rumours are to be believed, the format of the show will be an anthology series where each season will follow a different set of characters and storyline. If and when there are more seasons to follow, King’s talent for obscure connections may come into play to connect the seasons in a coherent thread. We’ll just have to wait and see.

The show is slated to begin production this year so it may be a while for the first episode to hit screens. In the meantime, as a way to whet your appetite, you should check out the teaser released below!