Skip to content
Forming as the New Yardbirds in 1968, before changing their name to Led Zeppelin, they refused to release singles in the U.K. attempting to establish the concept of album orientated rock.

Their signature prolonged guitar solos and reworking of blues standards, cemented them in the milieu of the period. Led Zeppelin are regularly cited as one of the progenitors of heavy metal and hard rock, even though the band’s individualistic style drew from many sources and transcends any one music genre.

They changed direction with their 4th album pretentiously baring no title or information, featuring the track “Stairway to Heaven”, a tour de force for vocalist Robert Plant and universally cited as one of the most influential tracks in rock music. Their tours broke countless attendance records and gained them a reputation for excess both sexually and in substance abuse. The band disbanded in 1980 with the sudden death of their drummer John Bonham.

Learn more about the rock legends in FIB’s 5 minute web-doco above. 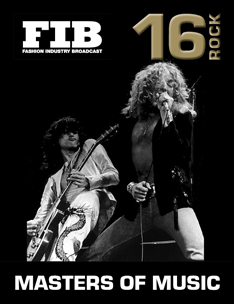 You can find out more about Led Zeppelin and some of the most influential names in rock music history in Fashion Industry Broadcast’s Masters of Music Rock here.