The Grundemark Nilsson Gallery has put together a selection of iconic photographic images for its latest exhibition. As a art medium, photography has been celebrated throughout the years for its ability to direct time or display a historical moment. Entitled ‘Strike A Pose’, the exhibition focuses on the act of posing and the power behind the photographer. The gallery hopes the collection will challenge preconceived ideals of the photographic passive subject and deeper explore the relationship between the person in front of the camera and the one behind it.

Here’s a sneak peek of some of the photographers you might see at the Strike A Pose exhibition.

Swedish photographer Julia Hetta takes interesting avenues when it comes to her portrait series. Instead of casting fashion models from the runway, Hetta street-casts her subjects. There is something timeless and beautiful behind the rawness of her work. Discouraging artificial light, Hetta relies solely on natural light and long exposure. As a result, she creates photography works reminiscent of classical paintings. One image features a full figured model bare back and faced away from the camera. By tapping back into the whole Renaissance look, photographer and model create a collaborative work that incites power and partnership instead of one that sexually exploits the subject.

Carl Bengtsson is another Swedish photographer who makes use of the natural light. Throughout his career, this photographer enjoys experimenting and combining analogue and digital techniques. Doing so, he creates astonishing results. His work is often described as reminiscent to 1920s vintage photography work. Another distinct characteristic of his style is that he allows the personality of his models to shine through his portrait series. Rather than the photographer, Bengtsson’s models dominate his photography work.

Yes, the infamous fashion photographer Helmut Newton will be featuring in the Grundemark Nilsson exhibition. Known for his striking yet controversial photography, Newton’s work is rarely mistaken for anyone else’s. He transforms fetishism, eroticism and brutality into a world of luxury and beauty. The Grundemark Nilsson gallery uses Newton’s most famous piece, ‘Sleepless Nights’ as the exhibition’s feature image. Unconventional, sadomasochistic and flirtatious, the photographic image has been considered a classic throughout the years.

The ‘Strike A Pose’ exhibition is scheduled to open on the 17 March and run until April 29.

If you’d like to learn more about Helmut Newton and other controversial photographers, check out FIB’s 5 min web-doco Fashion’s Most Controversial Photographers below! 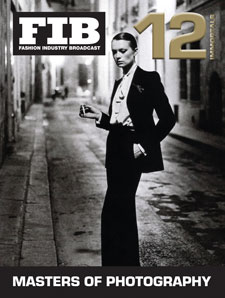 Also don’t forget to check out more in FIB’s Masters of Photography vol 12. “Immortals” available at Amazon and all good bookstores!