More Life: A Playlist By October Firm breathes more life into Drake’s catalogue as he learns to take a step back and tackle his music from an approach wildly different to anything he’s done before. Making this is his fourth project in the past two, The Toronto native has proven that he isn’t slowing down any time soon. 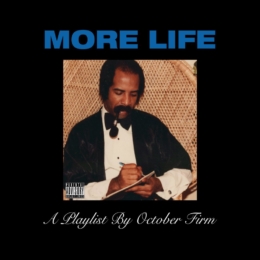 When we first came to this album we were reluctant to call it a “playlist” as Drake and his management team have dubbed it. What was Drake suddenly too good to use such plebeian words as “album” or “mixtape”? But while listening through it does begin to come across as a curated collection of songs rather than album. It’s split up with short bits of dialogue placed between most tracks, extended instrumental sections, songs where Drake merely pops in to sing the chorus, and some where he doesn’t even appear at all.

The tracks bounce around the globe from (Drake’s recently adopted) Caribbean Dancehall, to African House, to Southern Trap, to Grime from the U.K. This is an attempt by Drizzy to bring less popular genres into the mainstream, and introduce audiences to sounds they may not of heard before. That’s cool for a market that’s often oversaturated with similar sounding music. However, the downside is that in doing so he’s had to make them more accessible and thus simplified these extravagant genres to the point of all sounding a little flat compared to their roots. For example, if you really enjoyed the “Skepta Interlude” and wanted to go explore some of his own music, you’d soon realise that real grime is faster, louder and a lot more aggressive.

The weirdest song on the playlist though would have to be “Get It Together”, not because of how it sounds, but because of what it is. If you were to go listen to “Superman” by South African Producer Black Coffee (who’s listed as a feature on the track) you’d instantly recognise it as the same song but with updated vocals. This is also the first time Drake takes a step back and becomes more of a featured artist for Jorja Smith who sings most of the song. This is a pretty mature move by Drake to step back and give a platform to other artists, something other artists could learn from. It also proves that not only can Drizzy make good music, but he can sure as hell curate it too. Both “4422 (feat. Sampha)” and “Skepta Interlude” are a couple of the best songs on the playlist and they don’t even feature Drake.

Other highlights are the smooth and sensual “Passionfruit” which combines Jamaican Dancehall with RnB, the hard and grimey “No Long Talk” featuring the British MC Giggs, and the leading single “Fake Love” which has the energy of something off If You’re Reading This It’s Too Late. Although, there are a few weak points on the album including the Kanye-featuring “Glow” which just sounds confused and like it was lazily put together in an afternoon, especially because they just chucked in some Earth, Wind, and Fire to take up the whole last minute. “Ice Melts” with Young Thug isn’t too bad of a song, but the production quality is the worst on the album and it feels like Drake’s just trying to rip off “Broccoli” by D.R.A.M. and Lil Yachty.

Almost instantly after its release More Life dominated the Apple and Spotify charts with all the songs making it in the Top 100 on each platform. Besides the fact that Drake is a global superstar whose name alone can create a thousand heads turn, there seems to be more strategic calculation behind it. Drake and his team understand streaming and truly know how people consume their music these days. What the majority want, understandably, is a quick hit song that they can sing along to before moving straight onto the next. Maybe not so coincidentally, more than half of the songs on the album (sorry, playlist) are around three and a half minutes or less. This matched with Drake’s name and a reasonably catchy hook is a winning formula, and that’s what the people have voted.

But whether or not it’s smashing the charts because of calculated marketing, More Life: A Playlist By October Firm still is a great project by Drake. It’s an easy listening and some songs are catchy as hell, what else would you want? There’s no questioning it’s success and only goes to show how close Drake is to world domination. Let’s hope the man continues to pump out material at such an alarming rate, and that they get’s more and more diverse and experimental. Maybe next time he’ll get the whole album into the Top 20!