The war that never ends…In recent fashion news, many designers have been coming forward with accusations that “they stole my designs”. Whether it be between designer and designer, or designer and large retail giant, there appears to be copycats everywhere.

Danish outerwear label RAINS suing ZARA’s parent company Inditex, for allegedly copying RAINS staple raincoat designs. Given that ZARA’s raincoat has been spotted on sale in stores almost everywhere around the world, as well as on its website, it’s fair to assume that RAINS is looking for a rather big settlement.

Independent designer, Destiney Bleu, is taking on Khloe Kardashian for copying her clothing designs, saying Khloe had bought items from her store but she became suspicious when she was never seen wearing them. Turns out she may or may not have been re-creating them for her own label, Good American, although these allegations have been denied.

When someone buys 1 of everything on your site, has you make them custom @dbleudazzled work, never posts it or wears it, then copies it. ? https://t.co/hylp6fcOdh

Khloe isn’t the only Kardashian under fire for being a copy-cat (or should we say Kopy-Kat?). Kylie Jenner has recently been accused of stealing camouflage designs from the brand PluggedNYC.

PluggedNYC was founded In New York January 2016 By Creative Director Tizita Balemlay and her designs have been recognised everywhere but especially on Instagram.

Things you should know about PLUGGEDNYC: 1. Brand started with $100 2. Founded by a college student in a dorm room. 3. 1st BRAND to push the Camo Two piece movement, unless it was a custom. 4. Everything we do is for the CULTURE 5. #PLUGGEDARMY

However, Jenner released her new ‘The Camo Collection’ on June 8th, which look pretty darn similar to that of PluggedNYC’s, who apparently and ironically, Kylie has purchased clothing from in the past.

In PluggedNYC’s defense, Instagram users have taken to Jenners ‘TheKylieShop’ page and hashtagged #pluggedarmy to show their support. While Twitter users have also joined in on the action.

Thank you everyone for all the support, you guys are the voice I never had. Much love #PLUGGEDARMY ?https://t.co/59H6QJ0LNF

this happens all the time, and the sad thing is there is no law that protects intellectual property in fashion industry – but that doesn’t mean i can’t call it out – this is typical @topshop ! ?- you (topshop, zara, mango, forever21, basically ‘high street’ etc) have built a greedy empire off copying other people’s ideas, not to mention your questionable #slavelabor practices – #greed #corrupt #theives #stopthecorruption #fake #dontattachyourselftothistypeofkarma #industryproblem

When the Fenty for Puma collection was presented, the iconic sliders quickly became replicated at Topshop, in virtually the exact same colour.

Topshop has these slides for $30…Rihanna’s PUMA slides are $90 ? pic.twitter.com/3v87ShVWpp

Puma reportedly immediately took action to stop the sale of these satin bow slides and released the following statement:

“[I]mmediately reacted to the knock-offs that are being offered by Topshop in their shops and online and has successfully applied for a preliminary injunction which orders Topshop to not sell anymore their knock-offs of the Puma by Rihanna models creeper, fur slide and bow slide. The injunction has been granted by the High Court of Düsseldorf which has substantiated its decision with the fact that the Topshop copies infringe both Puma’s design rights and also have to be considered as unfair competition/passing off.”

Vetements basically started their clothing brand on copying, re-jigging and ‘making a statement’ on other brands staple icons. They later got a taste of their own medicine when clothing brand Vetememes came about, but Vetements could see the funny side and let they let it go without litigation. Read what we had to say about Vetememes here!

And what about when designers take average everyday items and turn the idea into high-end, high-priced clothing item? 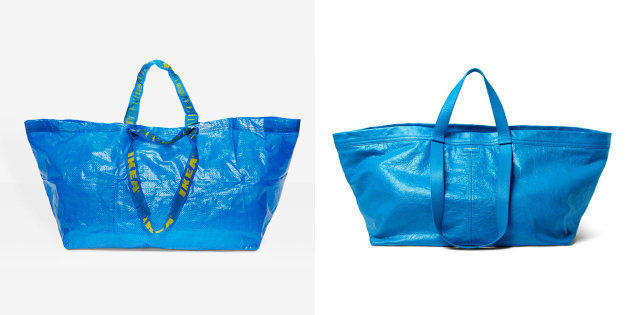 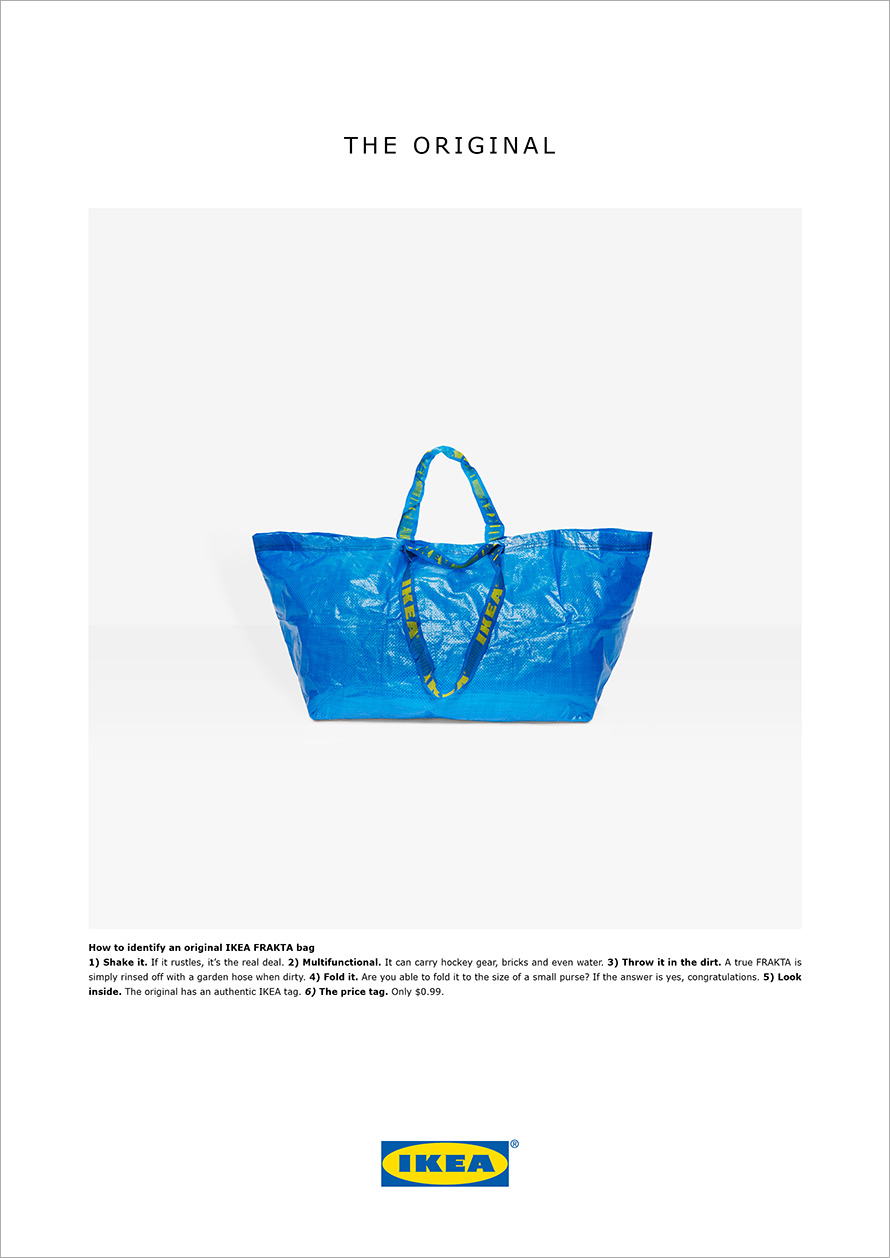 How to identify an original IKEA FRAKTA bag: 1) Shake it. If it rustles, it’s the real deal. 2) Multifunctional. It can carry hockey gear, bricks and even water. 3) Throw it in the dirt. A true FRAKTA is simply rinsed off with a garden hose when dirty. 4) Fold it. Are you able to fold it to the size of a small purse? If the answer is yes, congratulations. 5) Look inside. The original has an authentic IKEA tag. 6) The price tag. Only $0.99

This round goes to Ikea.

And Anya Hindmarch’s bags shaped like a bag of chips (or crisps if you prefer) is definitely worth a lot more dough than those found at your local supermarket.

Moschino, the purveyor of ‘trash inspired’ fashion also has its take on the phone case, borrowing some imagery from our favourite fast food joint.

And then there’s London-based designer Ashish Gupta who has revamped the plastic grocery bag into a sequinned statement piece.

Of course, there is historical precedent for this kind of ‘borrowing’ or ‘taking inspiration from everyday items’ with the more famous example, being Andy Warhol’s “Campbell Soup Cans”.

We all know that taking someones image without their permission will put us in the likely realms of a lawsuit.

Much like Urban Outfitters and Forever 21 being slapped with a copyright infringement lawsuit by photographer Danny Clinch, who claims the retailers are selling t-shirts bearing photos he took of rapper Tupac Shakur for The Rolling Stone’s magazine.

So why is it then, that fashion designs always get caught in such a grey area. It makes it hard to distinguish between outright copying and just inspiration!

Especially since there’s such a thing as Intellectual property (IP); an essential tool to protect your ideas and the work you generate as a designer in the clothing and fashion industry.

However, maybe companies and designers are getting away with it through little loopholes. According to IP Australia ‘A design right protects the overall appearance of a product and allows the holder to exclude others from using the design in any commercial way in Australia for up to 10 years. The protection covers the shape, configuration or pattern that gives a product its unique visual appearance but excludes the feel of the product, what it’s made from or how it works.’

It is likely that this war on fashion design will continue as laws vary all over the world.

Though it’s hard to know who will be in the spotlight next for being a copycat, it’s fairly certain that it will only be a matter of time before the next lawsuit arises.