Here are five of the wildest stories that we can’t stop thinking about!

Presumably, people do watch the heavily hyped UFC matches between Conor McGregor and Floyd Mayweather. But do you remember anything that happens in them? Hell no. They’re dead boring. But you know what’s not boring? The lead-up, when these two really show us what they’ve got by (verbally) smacking each other around. Together they bring more petty drama than an episode of the Real Housewives.

Here are some choice exchanges from their presser in Los Angeles today:

Mayweather [waving a $100m cheque around]: “Let me show you what a $100 million fighter looks like”

McGregor: “That’s to the tax man”

Mayweather: “You’re right. I’m the IRS, and I’m going to tax your ass.”

Ding ding ding! We love McGregor going for the low blow by bringing up Mayweather’s battle with the IRS, who he apparently owes $22million. And while Mayweather had a comeback ready, it was pretty weak. On the flipside, no one is hated more than the tax man so maybe this is actually quite clever. Hmmm. We’re going to rule this opening salvo a draw.

Ding ding ding! Racially offensive and beyond stupid, McGregor takes a major L for this one.

McGregor: “He’s in a…track suit…He can’t even afford a suit anymore. The Rolls is a 2012 outside. He is fucked, there’s no other way about it.”

Ding ding ding! You know how when someone gets super personal in a fight, it means they’ve already lost and they know it? That’s McGregor here. He knows he probably hasn’t got a shot in the ring, so he has to go low. It’s the equivalent of constructing a proper argument with stats and research to back it up and your opponent reverting back into the inner proverbial kid in the playground and yelling “we’ll you’re stupid and your clothes are ugly nyah nyah na nyah nyah”. This one has to go to Mayweather by default.

Speaking of suits though…this brings us to round four.

The openly gleeful McGregor showed up to said press conference in a tailor-made blue pinstripe suit, which upon closer inspection reveals that the pinstripes consist of tiny letters spelling out ‘fuck you’ repeatedly.

Oh god, this fight (like most actual McGregor v. Mayweather fights) was over before it had even begun. This takes the petty cake and nothing Mayweather has to say matters.

While McGregor takes out this battle thanks to his sartorial ingenuity, it’s probably going to be a different story in the ring. Who cares though? We know we (along with everyone else) has way more fun watching these two duke it out in press conferences. 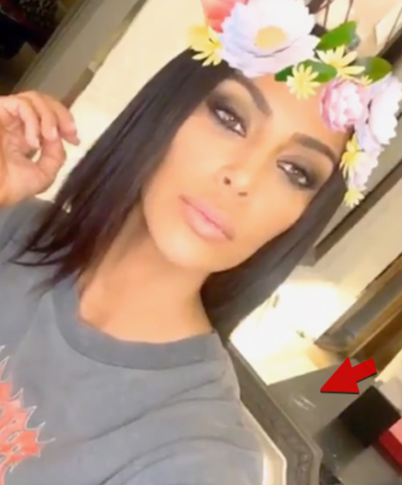 Some keen eyes observed that Kim Kardashian had what appeared to be two lines of coke in the background of her snapchat earlier today. Kim, of course not being one to ever let rumours about her circulate fired back on twitter, claiming that the white powder was in fact sugar.

Yes Kim, we believe you. We too like to pour sugar straight out onto the countertop. She later clarified that it was leftover candy mess from the kids. Yes, of course, totally Kim, because everyone has leftover candy on their table in two perfectly cut lines and it too busy to clean it up. Ants, what ants?

OMG you guys!!! Check my snap chats or insta stories I’m crying!!! That was not candy on my table! The table was marble this whole time!

If were doubting Kim’s explanation though, don’t fear! Kim did some investigative work and it turns out it was the marble countertop’s fault all along! Phew, our faith in Kim is restored. Now if only she could muster up some creativity too, and start actually designing shit rather getting her kids or ten-year-olds to design her stuff.

Take a deep breath. Okay, here we go. So Lena Dunham has a celebrity dog named Lamby. Since being adopted by Dunham, Lamby has appeared all over her Instagram and participated in her photoshoots and even gone along to interviews. So when Lamby began to disappear from Dunham’s social accounts, people were naturally curious. On June 21st, Dunham kicked off a ‘she said he said’ pissing contest between herself and Lamby’s previous shelter by sharing an Instagram post that stated she’d found a new home for Lamby after “four years of challenging behavior and aggression that could not be treated with training or medication or consistent loving dog ownership.” Behaviour that included “biting and peeing in his own mouth and all” which she chalked up to his experience of “terrible abuse as a pup”.

A lot of you have been asking where Lamby is these days since he’s always been the star of my gram and I’ve been posting pics of my poodle girls. Well, you know honesty is my jam but this one has been really heartbreaking to talk about. But I feel I have to share that last March, after four years of challenging behavior and aggression that could not be treated with training or medication or consistent loving dog ownership, Lamby went to live at an amazing professional facility in Los Angeles @matt_thezendog where an awesome person named @therealdanishay (who is educated in a rescue dog’s specific trauma) loves him so hard. Lamby suffered terrible abuse as a pup that made having him in a typical home environment dangerous to him and others- we needed to be responsible to ourselves, our neighbors and especially our beloved boy. Jack and I will miss him forever but sometimes when you love something you have to let it go (especially when it requires tetanus shots and stitches.) Someday I’ll really write about the pain and relief of letting Lamby go off and really be Lamby, biting and peeing in his own mouth and all. There were so many lessons in it, about forgiving myself and loving with an open palm and giving in to a larger plan. Shout out to @jennikonner for listening to endless hours of Lamby pain, and especially my partner @jackantonoff for loving him even when he ruined floors and couches and our life. Jack knows what Lamby means to me and he let me come to the decision in my own time even when it made his days challenging. Susan & Karen will never be my first loves, but they are fuzzy and hilarious stuffing for the hole Lamby left and we cherish them deeply ❤️#lamby #thefirstcutisthedeepest #foreverlamb PS If you have a similar situation, please know its possible to responsibly re-home your rescue rather than sending them back into the shelter system. It can require patience, diligence and often a financial contribution but there are solutions that leave everyone happy and safe. You will always have been your dog’s first stop outside shelter life and that’s beautiful.

This abuse was strongly refuted by BARC, the New York City animal shelter Lamby was adopted from. A spokesperson for the shelter said that Lamby’s behaviour and affection towards Lena doesn’t jive with the behaviour of an abused dog. This spokesperson also implied that Dunham simply made up the claim that Lamby had three previous homes before Dunham, stating that there was nothing in their records to indicate Lamby had multiple owners. Dunham clapped back (again on Instagram) referring to this dispute as a micro-drama but making sure everyone knew she was undergoing some emotional revelations and growing as a person (“There were so many lessons in it, about forgiving myself and loving with an open palm and giving in to a larger plan”). Dunham, as a side note, immediately adopted two new dogs after surrendering Lamby so *insert eye-roll here*

It’s come to my attention that the staff at the shelter where I adopted Lamby have a very different account of his early life and behavioral issues than I do. While I’m sorry to have disappointed them, I can’t apologize. Lamby was and is one of the great loves of my life. When I met him I knew we’d have an amazing journey. But his aggression – which was unpredictable- and his particular issues, which remain myriad, weren’t manageable, at least not by me. I did what I thought the best mother would do, which was to give him a life that provided for his specific needs. He’d been with me for nearly four years and I was his mom- I was in the best position to discern what those needs were. After countless hours of training, endless financial support and a lot of tears he was given access to a better life. I still support him financially and I’ll always be there for him in every way but he’s notably happier in his new surroundings. Why should this story be subject to scrutiny and anger? It is willfully misunderstanding the truth. I hope those judging can imagine the incredible pain of letting go of your favorite creature on EARTH because you know you can’t help them be healthy and happy. I would never say an unkind word about the staff of BARC, what they do is amazing and life saving for these animals- but we have different accounts of Lamby’s behavior and they were not present in my home nor did they live with him for an extended period. They did not witness the consistent and responsible care I provided. I have weathered a lot of micro-scandals but this one hurts MOST, because of the vulnerability of letting people know Lamby and my story, and because I miss him so damn much. This is the painting that greets me every day when I walk into my home. This is the animal who taught me about loving and letting go. I know I’m a lot of fun to place your issues on, but I won’t let anyone hang their hat on this peg. Not this time.

The subsequent think pieces in the coming week (ranging from using Dunham as an example of everything wrong with contemporary dog ownership and debates about whether or not Dunham is a good dog owner) has raised this micro-drama into absolute ridiculous levels of absurdity. *double eye-roll*

Tragically, the office dog we adopted at 12 weeks old could not overcome her history of abuse and will now have to be chucked out a window.

Look, Game of Thrones has taught us a lot of stuff. Namely, chewing through a horse’s heart is bloody tough and if you see people wearing chainmail at a wedding, you should leg it quick smart. And while the show does sexposition (yes, it’s a real term) better (ahem, Littlefinger in the brothel) than any other show running, do you really associated Game of Thrones with sex ed class? Sophie Turner sure does!

Twelve years old when she first auditioned for Game of Thrones, the now 21-year-old had this to say recently, “The first time I ever found out about oral sex was from reading the script. I was like…‘Wow! People do that? That’s fascinating!” Imagine being at that table read, we would’ve blushed for days!

Ever committed a felony at fourteen? Maybe you can relate to BJ Novak who in an appearance on Stephen Colbert told a truly wild story about stealing someone’s identity at the age of fourteen to forge a driver’s license. Just watch the clip below and admire this level of dedication.