Sometimes, there are trends in the fashion world we’re glad to see make a resurgence, like chokers or the effective belly-roll concealers known as high-waisted jeans. It’s nice to see a comeback from the good ol’ days every now and again, though other times we get an unexpected blast from the past we never asked for – and frankly, one that we had hoped would never make a grand return to modern society.

Here are FIB’s top picks of old fashion trends that have long been dead and buried, and should probably stay that way!

Jeans are great. They show off your toned quads, those defined calves, give your butt a good lifting – they’re all around a pretty flattering piece of fashion and go with just about anything. It’s hard to look bad in this classic staple; that is, until you go around looking like you just mugged Kevin Federline. At least donning his stolen rhinestones would serve as a warning to any other mediocre 90’s rapper who dares come close.

With that image in mind – unless you’re down for legs as shimmery as Edward Cullen’s, it’s probably best to stay away from these bling-dipped jeans. If you need extra sparkle and excitement in your life – there’s always real jewellery and wine. Just steer clear of bedazzled denim of any and all kinds.

Coming up next is yet another bastardized branch of an otherwise perfectly fine piece of clothing – the extra, extra low-rise jeans.

Now with all fairness and due respect – this particular fashion trend may still work on the super-toned, super-sexy, super-diet-disciplined of the female species (basically – Keira Knightley or any other supermodel-movie-star of the 1990’s). But for the rest of us with muffin tops and love handles, this item can feel less like a flattering fashion trend and more like a reminder of the Ben N’ Jerry’s pint you devoured while binging on the latest season of Homeland. Falling a significant number of inches below the hip, the jeans do little to hide any midriff imperfections and fail to grant you the shapely figure most aim for in jeans – if anything, they give the impression of having an abnormally long torso for a human being.

Oh, and of course – bending over to pick up your dropped keys are a no-no, lest you’d want to expose your asscrack for the world to see (unless that in itself is fashionable for you, in which case… well, it really shouldn’t be). 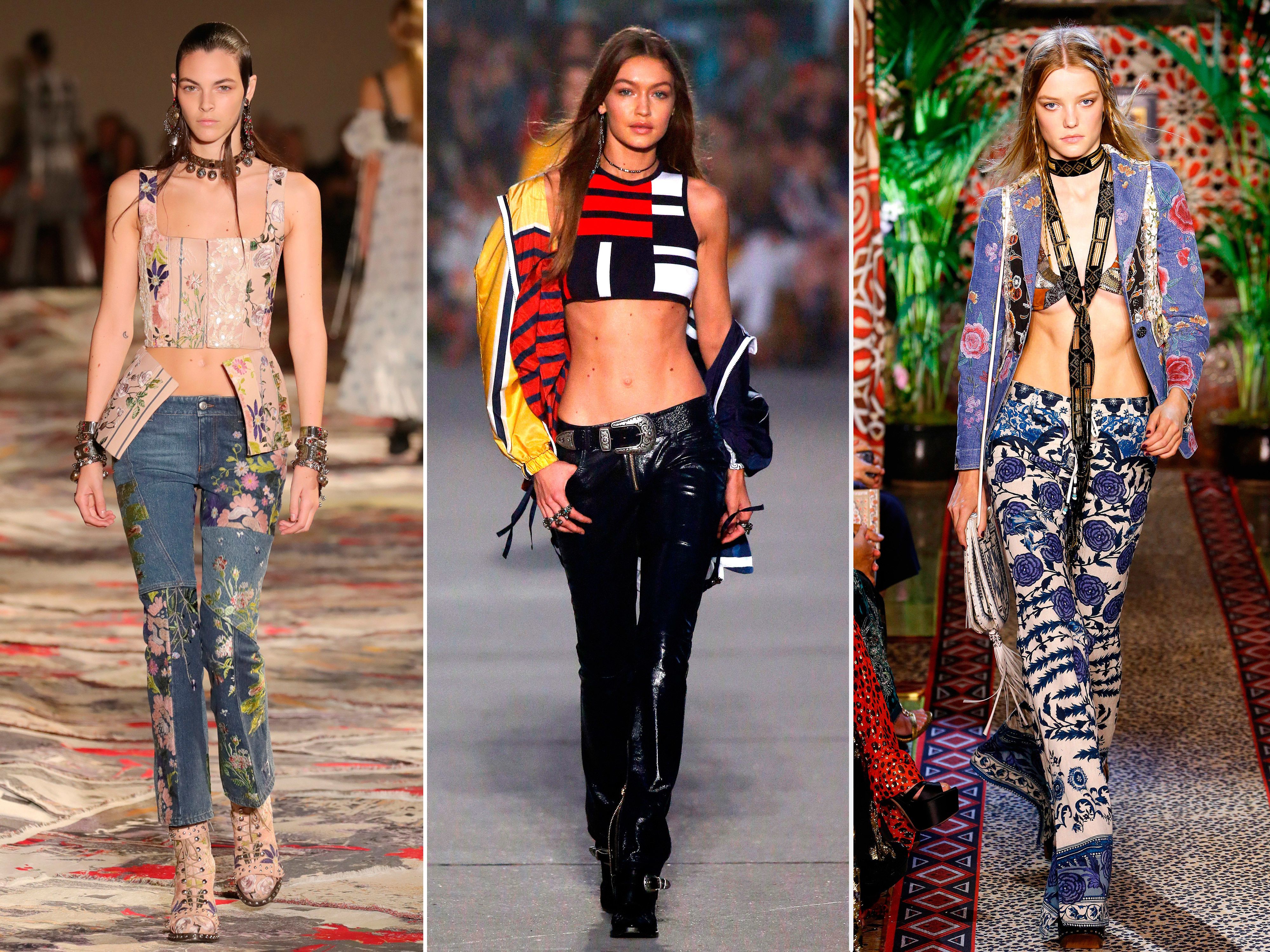 Ouch, not even high fashion can make this look good. Say no to low rise jeans.

Socks and your favourite pair of strappies are probably as good together as chocolate and onions (unless, hey, that stuff actually floats your boat – just know that you’re being silently judged by those around you). The concept ultimately goes against what either of the articles of clothing are meant to be used for originally – sandals provide that breezy exposure on a hot summer day, and socks lock in that warmth during colder seasons (or at the very least, prevent you from walking around in fetid stink bombs by absorbing any extra moisture).

However, the practicality of wearing socks are simply deemed pointless in the case of sandals; by design, the shoes were literally invented to keep feet exposed, cool and dry – already evaporating excess perspiration in the first place. The grand idea of combining these two badly-matched fashion items will thus forever remain as one of the industry’s greatest mysteries, and an aesthetic of those who have possibly just lost a bet.

Another hairstyle makes our countdown with the people-repellent known as the “bowl cut”. Sadly victimizing a large number of 90’s kids in its prime, nothing plummets your Coolness meter faster than this goofy hairdo. And, as if hairstylists everywhere pondered, “How do I make this look even more ridiculous?” – the cut is often paired with a middle-parting for that extra dose of shame. Boy-banders and heartthrobs of decades past will forever be haunted by the time their middle-parted bowl cuts were plastered all over teen magazines for the world to judge – but hey, everyone makes mistakes. This hairstyle choice just happens to be one of the worst of them.

In all brutal honesty, the only times this cut is deemed reasonable would be one of the following situations:  (1) Getting dressed as a humanoid mushroom for Halloween, (2) applying for a job as a Beatle or a 1990 Leonardo Dicaprio impersonator, or (3) managing to get your head stuck in a bowl and were in desperate need of tearing it the hell off. Otherwise, there’s absolutely no desire for this hairdo to make a comeback in style, and if ever it did – at least go all-out and have one of those awkward portrait photoshoots to boot.

It’s funny to think there was a time these guys were once revered as the finest hairstyle of the fashion realm. Now, 80’s kids everywhere have probably got a stored pile of old Kodak portraits that serve as a humbling reminder of their young, hilarious decisions.

Popularised by popular musicians such as Bono, Steve Perry, and (quite possibly the spokesperson of this awful trend) Achy-Breaky Billy Ray Cyrus, this heavily-gelled mess of a style was often paired with a thick handlebar moustache for that extra creep factor.

And if that image wasn’t convincing enough for you to avoid growing one of these comedic manes yourself, just take a gander at some of these tragic photos for insight. The trend was even banned in Iran – and while it was due to looking too “decadent” for the government’s standards – PR professionals were quick give this news an international boost out of approval for condemning a ridiculous hairstyle that no one ever needs to sport again.

Surely you already know about fashion’s greatest sin, but I’ll reiterate the sentiments anyway. Apart from making you look like you just walked out of a sauna – which in actuality, was what it was designed for in the first place – Crocs do nothing for your fashion rep, except maybe damage it beyond repair.

Looking like someone took a hole-puncher to a pair of perfectly fine clogs, Crocs are popularly known as uglifiers for your feet, available in various neon colours with a palette inspired by MS Paint. Unless you’re lounging around the house on a Netflix binge or about to go wading in a lake (as people do), perhaps it’s best to leave these rubbery eye-sores out of public view.

We’d also hate to burst the bubble of those who argue these things have an ergonomic benefit – as podiatrists were pretty quick to bust that myth. Bottom line: Crocs are probably not going to do you any favours. It’s got a bad enough rep to have ranked a spot on Time’s “50 Worst Inventions“, and even inspired Steve Tuttle of Newsweek to write up an entire Anti-Crocs essay. You know that movie, “How To Lose Friends and Alienate People”?

I’ll admit, I’ve never seen it. But I’ll bet from the title the dude probably wore Crocs at some point in his career.

Fashion is an undeniable roller-coaster of weird, wonderful, and innovative styles, both for better and for worse. While we get those trends of brilliance from time-to-time – again, bless the high-waisted apparel – there will always be those blunders that we hope and pray the fashion gods would have also long forgotten. Tell us what you never ever ever want to see come back!