In the two decades since her death, Princess Diana has joined the ranks of the best-dressed women in history, maintaining her status not only as the royal family’s first ever global celebrity but also, the ultimate fashion icon.

Last Thursday marked the 20th anniversary of The Princess of Wales’s death, and yet her iconic style remains both ever fascinating and unendingly relevant. Diana’s iconic heritage has seen her step into the same arena as Audrey Hepburn and Jackie Kennedy. So says Eleri Lynn, the curator of ‘Diana: Her Fashion Story,’ which opened this February at Kensington Palace. Speaking to Vanity Fair, Lynn labeled Diana ‘a fashion icon, whose style is so emulated and so loved.’ Of course, Diana’s style was, and remains, one of the most emulated in history. Whatever she wore, the country followed suit. A pair of seamed tights with a bow motif worn by the princess sent the country into overdrive to buy them, resulting in a huge boost in sales for hosiery companies. The anniversary of Diana’s death has seen a refreshed homage to her celebrated style, accrediting her ongoing influence within the fashion sphere.

Lynn suggests that Diana’s style remains so relevant because ‘she rose above the ever-changing trends with a timeless and elegant style.’ Diana’s ability to transcend the trends undoubtedly contributes to the princess’s ongoing sartorial significance. Yet I like to think there was more to Diana’s fashion sense than timeless elegance and style. Diana certainly knew the power of clothing for personal branding. She learnt an important lesson very early on in her public life about the significance of communicating herself through the visual medium of clothing, particularly in a role where her ability to speak out was limited and she was forced to be guarded in everything she uttered.

Jude Davies, the author of Diana, A Cultural History, suggests:

‘there are many aspects to Diana’s continuing iconic status, but a central issue has to be her apparent ability to communicate in personal terms across mass media.’

Diana mastered this art of communication, predominantly through her clothes. And as the years went by, the power of her wardrobe to make subliminal, and often not so subtle, statements was a constant fascination for her admirers and critics alike.

Diana ruled the art of royal fashion, seamlessly embracing Royal etiquette and yet all the while resetting the style expectations of a female monarch. Nicknamed ‘The People’s Princess,’ Diana knew how to dress in a way that exuded a bold sense of flair but always felt approachable, never intimidating. Dispensing with formality, the princess famously discarded gloves for royal occasions and official visits. She favoured the comfort of Superga trainers (long before Kate Middleton made them a staple) and some of her most famous portraits are candid paparazzi shots of her out on a jog in cropped cycling shorts, thick athletic socks and oversized jumpers.

Of course, Diana’s art of speaking through her clothes could be no more relevant than today, in a celebrity-obsessed culture where an increasing amount of communication relies on visual mediums. Tracing the evolution of Diana’s legendary style from her shy ‘Sloane Ranger’ days to the global obsession that she became, let’s take a look at Diana’s most pertinent looks and reimagine what her aesthetic may look like today.

‘Shy Di’ and The Sloane Rangers

When Diana first came onto the royal scene as the fiancé of Prince Charles, her pie-crusted blouses and pastel ruffles procured her the affectionate media nickname ‘Shy Di.’ Princess Diana was the poster-child for the ‘Sloane Rangers’, a term coined by Peter York and Harpers & Queen Magazine’s editor Ann Barr, used to describe a certain kind of upper class, boarding-school-educated British type with ‘an affinity for country life, corduroys and sensible knits’. Working as a nursery school assistant during these early years, Diana confessed to owning just three dresses.

One of Diana’s first ever television reports caught the princess on camera wearing a sensible blouse and a now-infamous cotton skirt, completely see-through in the sunshine. Perhaps this mishap prompted Diana to completely rethink her wardrobe, but whatever the reason, when Diana entered the royal arena, her fashion choices spoke volumes about what the Princess of Wales wanted to show of herself.

In March of 1981, a newly engaged Lady Diana Spencer accompanied Prince Charles to plant a celebratory tree in Romsey. Taking one of her first steps into the style influencer role, Lady Diana wore a romantic, high-collar, pie-crust blouse underneath a colour-blocked green and blue skirt suit, prompting a wave of ‘Di blouses’ across the British high-street. As it happens, ruffled and frilled-collared blouses are everywhere at the moment, most recently seen in Alexa Chung’s ‘Archive Collection’ with British high-street retailer Marks & Spencers. Colour-blocking is equally having its moment, and this Attico dress is the perfect modern update to Diana’s confident colour choices.

From the start of her life in the royal arena, Diana used her clothes to make gestures. Careful tributes to host nations were often made through the vocabulary of her wardrobe, such as the cream gown embellished with gold birds she wore on an official visit to Saudi Arabia, a green and red silk suit for her first visit to Wales, and a Yuki for her arrival in Japan. In September of 1981, Diana attended her first Braemar Highland Games in Scotland. Honouring the country’s heritage the princess dressed in a tartan puff-sleeved blazer, matching skirt and beret. The suit, designed by Caroline Charles, is every bit a nod to today’s Balmain – a label I imagine Diana being drawn to for its simultaneous trailblazing vision and regard for its heritage.

Diana’s beret is also having a comeback moment right now with high-end retailers like Gucci offering a selection of leather designs and smaller labels such as Charlotte Simone and Itchy Scratch Patchy offering a range of different designs and colours.

Diana’s love of heritage fabrics continued through the years, with her quintessential go-to outfit a tweed blazer, shirt, faded Levis and white heels. The look is timeless, a classic then and no less of one now. Her love of tartan, tweed and anything heritage is synonymous with today’s Burberry runway collection and I imagine Diana would attend a Burberry show in a heartbeat. After all, Diana famously supported many British designers as a positive hand she could give to the fashion industry she loved.

As she evolved in her public role, and even more evidently after her divorce, Diana adopted a decidedly more bold and sleek look. Gone were the ruffles and complicated details, in favour of fluid shapes and bright pops of colour.

Bright, cheerful colours were at the top of Diana’s list to convey approachability and warmth. Over the years, the princess experimented with all kinds of combinations, but twinning pink with either purple or red was her colourway of choice. Long before the ‘millennial pink’ fad, Diana wore pink suits in fuchsia, bubblegum, candy and baby pink. Although she never wore a pink trouser suit, I imagine the 2017 spin to be just that. This silk Gucci piece, with colourblock lapels, oversized black buttons and lightly padded shoulders, is the perfect modern update to Diana’s favourite look. Pairing it with chunky gold earrings and a high-necked blouse would be a contemporary nod to Lady Di’s 80’s apex. 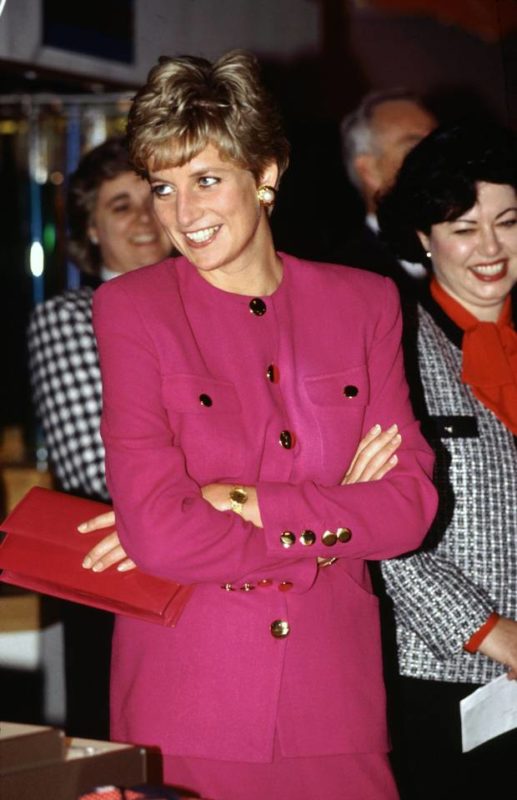 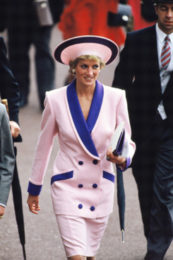 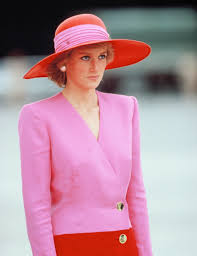 Like colour, Diana also used prints to communicate a friendly presence, famously wearing floral prints when with children and on her many visits to hospices around the country. Polkadots were a firm favourite with Princess Diana and of course, they were huge in the 80s. For a modern update, I envisage Diana swapping her colourway of choice to black with large white polkadots. Both Moschino and Gucci currently have very Diana-esqu polkadot blouses in black, and Monse has a fantastic ruched, polka-dot, silk blazer that is every bit a homage to 80’s Diana. Diana was rarely without a white court and I picture her teaming her updated polkadots with a glossy black toe-capped white court from Chanel.

The Originator of the ‘Revenge Dress’

In June 1994 a televised confession was aired in which Prince Charles’  admitted to being unfaithful with Camilla Parker Bowles. That same evening Princess Diana attended the Serpentine Gallery summer party in a black figure-hugging, off-the-shoulder dress that would come to be known as the ‘Revenge Dress.’

Of course, the whole thing was entirely calculated, by this point Diana had mastered the art of personal messaging through her clothing choices, and she chose this particular dress to slap back at Charles and his affair. ‘It was quite deliberate,’ says Etherington-Smith. ‘She was very good at obliterating the press. Princess Diana, she was out for the hero shot.’

The dress, designed by Christina Stambolian, almost didn’t get its moment in the spotlight. According to the Greek designer, Diana had owned the dress for three years but hadn’t had the courage to wear it, initially thinking ‘it was too daring.’ As it turned out, the dress was an inspired choice, and it worked. A symbolic push-back against the confines of the monarchy, all anyone could talk about was Diana and her black mini-dress. She quite literally stole the front page from Prince Charles and proved, more than ever, her ability to use clothes to communicate a message.

There is little to update about this look, Diana’s ‘revenge dress’ concept is an ever more popular, specifically in regards to the ‘Little Black Dress,’ which remains a timeless piece. A slightly updated version might see Diana in this one-shoulder SEA dress (Diana was always a fan of the asymmetric neckline), or this tuxedo inspired wrap dress, or even this slightly shorter, asymmetric-draped satin LBD. To cinch with a Diana spin, a pearl choker and understated black courts.

After her separation from Charles, Diana grew increasingly daring in her style, swapping the British labels she had often promoted for more international fashion, including Versace, Ralph Lauren, Valentino, couture Chanel suits and Hermès handbags. By this time, Diana had become one of the most fluent fashion speakers of our time. She had mastered the art of using clothes as her vocabulary. Undoubtedly, this was, and remains, a huge factor in her remarkable appeal.

Diana quite literally wore her heart on her sleeve and it is this sense of vulnerability that likely attributes to the powerful and cherished figure she remains today. The most photographed woman of the 20th century, it is unlikely that Diana’s style influence will significantly wain, but rather, it will continue to inspire women around the globe.

Diana: Her fashion story will run at Kensington Palace, London until February 28, 2018.