American fashion designer Christian Siriano celebrated the tenth anniversary of his eponymous label in style at the Fall showing of New York Fashion Week. The designer has gained a loyal fan base and a Who’s Who of celebrity clientele for his diverse offerings, which champions people of all sizes, colour and gender. If fashion fell under the United Nations, Siriano would be president. He certainly has my vote! 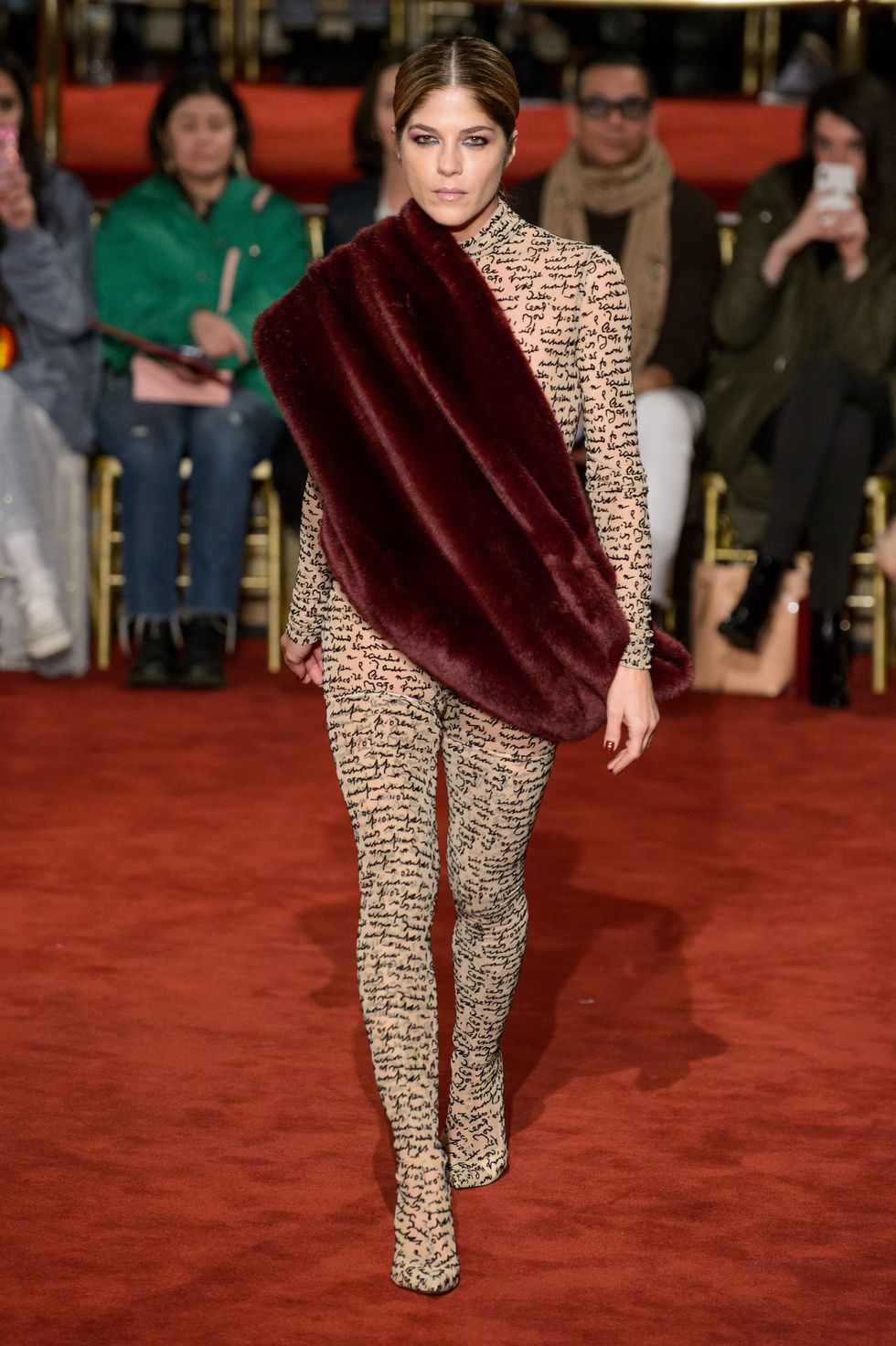 The large red-carpeted runway was lined with an A-list crowd as diverse as his mission. Everyone from Meg Ryan, Whoopi Goldberg, Christina Hendricks and Cardi B. were in attendance for this important milestone in Siriano’s career. Though fashion was the focus, the runway was full of cultural subtext and celebrity voyeurism, with supermodel Ashley Graham opening alongside actors Danielle Brooks and Selma Blair in her modelling debut. Blair owned the runway in a nude cat-suit, keeping her modesty intact behind a wall of script and burgundy stole. Usually repetition on a runway can spell disaster, but in Siriano’s case it drove home a message, that an outfit can be just as sexy and empowering on a size 6 as a size 16. Case in point – Graham’s opening number: a plush coat cinched at the waist with Kinky-Boot-esque kicks.

The gender diverse moments made for very strong statements both in look and message. However, the more successful looks were the tailored metallic suit pieces. These were fresh, fun and feminine, with the right amount of boxed structure to suit the models’ forms. For my thoughts, the black patent leather looks bordered into S&M territory. Whilst immaculately constructed, they were not as effortless as the new look suiting and sent a counter message.

These are my top picks of the night. The crystal black velvet numbers deserve to be seen in motion, they looked like stars against the night sky as they caught the light. In particular, Siriano is a master of the 2-piece suit for women. The flared pants and cinched waists are so flattering and so modern, albeit with a nod to the 70’s, and the laser cut foil pieces were a knockout on the night. They will surely be seen at upcoming red carpets among others in this line up.

With 72 looks cascading down the runway, it can be hard to maintain consistency. For Sirano’s Fall collection there were mostly highs to celebrate, but it must be said that not all looks achieved that Sirano magic. There were some very heavy handed moments across several fabric stories, where garments were unflattering, outdated and a little kooky. Unlike the instance of Graham’s double up coat, Selma Blair’s moment was detracted by the repetition. The reason for this is that some pieces can be worn by all and look equally fantastic, and frankly others just can’t. Not because of their size and shape, but because of context and persona. For Blair it made sense, she has the draw card of celebrity and the context of her debut to the runway – it had to be a big moment and it was. What was needed across the board though was a stronger edit.

In saying that, Siriano is very much an intuitive designer who works to the beat of his own drum, in-spite of the critics. In an interview with The Cut Siriano expressed this plainly:

“Even if every department store closed tomorrow and no longer sold my clothing, I would still have millions of dollars in private-sale clients. At the end of the day, it doesn’t matter if you dress 100 actresses on the red carpet — if women aren’t shopping and buying clothes, there is no point”… I get the continuity and it is beautiful to see, but there’s also no life to it. I’m personally not a fan of that. I want the models to feel good in the clothes, and the audience feels that and it’s nice to see that.”

This was most certainly true of his Fall 18 show. There was a lack of theme – yes, but in its place were some beautiful designs and an underlying shift of cultural perception. For this reason, Siriano can live outside the rules much like Azzedine Alaia. Because his work is in demand, his message is on point with the change people wish to see in the industry (and the world at large), and he delivers provocative design for all the right reasons.

We’d love to hear your thoughts on the show and why you think Siriano is one of the few contemporaries to tap into diversity on the runway?