As you may or may not know, Sydney-based band Sticky Fingers have recently come out of a year-long hiatus, much to the delight or discontent of the music scene.

To me, the word that Sticky Fingers were coming out of hiatus was some of the best music news I’d heard all year. To some, however, it’s all the more reason to bring up past conflict and address the serious allegations of racism and verbal assault made prior to the band going on hiatus. Which of course, is understandable – but surely it’s time this voracious trial by (social) media came to an end?

But since I’m an agent of the media, I’m here to throw my hat into the ring in Sticky’s defence. As such, I will now present a summation of their long-awaited (nevertheless, scandalous) comeback.

Sticky Fingers take to Instagram, breaking their silence and announcing their return from hiatus. Having lived a pretty musically indulgent life thus far, with Sticky Fingers ever present, to see one of my favourite bands back together had me overjoyed – an understatement, to be sure.

The band made a shock return to the live scene at Sydney Festival ‘Bad Friday’, confirming rumours of their ‘Secret Headliner’ slot and absolutely stealing the show in Marrickville.

Over a week after the band announced its return from indefinite hiatus, lead singer Dylan Frost posted a five-minute long statement to the Sticky Fingers Facebook page. Dylan’s statement included a personal acknowledgement of his unacceptable behaviour in the past, and a sincere apology to those who had been on the end of it. Frost also notably mentioned that he has hurt various communities who have been subject to abuse, and he understands that some may not accept his apology.

No doubt this apology is overdue; however, the personal mental health issues that the troubled crooner has been facing in the last few years have had clear implications on his ability to speak out.

Firstly, I want to make it clear that addressing allegations is important; however, it is also important to note that both of the allegations against Dylan Frost haven’t been proven. The mentioned allegations made on social media have now been deleted.

Triple J and Tom Tilley were fortunate enough to host all five members of the band for their first interview since their hiatus. You can listen to the full interview here. This was a golden opportunity for Sticky Fingers to clear the air after a year of silence; something that both the band and the Aussie music scene desperately needed. Unfortunately, this interview was dominated by a clear Triple J agenda, which seemed to demand a distinct apology from Frost throughout the majority of the interview. I think during parts of the interview the answers from the band members and Dylan Frost weren’t adequate, but it is clear they are facing a lot of pressure. Especially Frost, who is living with bipolar schizophrenia and is in the middle of the two allegations made.

As a fan of the Australian music scene and Sticky Fingers – as well as equality, accountability and respect – I appreciate that there have been certain instances in the history of the band which might discredit their validity. With this in mind, isn’t it only fair to question the mentioned allegations, their validity and the ability of media manipulation? It is clear to see that through the new-found sobriety and willingness to front up to short comings that Sticky Fingers want to start afresh. But, is the public willing to give them another chance?

Additionally, and rather surprisingly given his onstage antics, Dylan Frost doesn’t enjoy public speaking – he even directly states in the interview, “I’m not good at interviews”. Some see this as a petty excuse for not wanting to apologise, others see it from a more sympathetic point of view – attributing his apparent anti-sociality to his bipolar schizophrenia.

Make of it what you will; and once again, please let me know what you think in the comment section.

Regardless of the media and fan pressure surrounding their return, Sticky Fingers have decided to ‘Kick On’ – dropping a super poignant, lyrically impressive track, replying to the critics the only way they know how… rocking out!

It was clear from the Triple J Hack interview that Dyl really doesn’t like the mike (in interviews anyway). Be this because of his diagnosed mental illness, a wish of anonymity, or the fact he didn’t want to comment on the allegations… who knows. The response from the band throughout the interview on Hack with Tom Tilley have been much criticised by Triple J listeners and beyond. This criticism has led to one last address. On April 16th, the lead singer Dylan Frost took over the Sticky Fingers Facebook page to make a final statement on the events that instigated the criticism.

Frost used a near police statement specificity during his recount of the allegations, giving readers at least something concrete to believe. Sharing these details goes a long way against the racist allegations made, while also clearing the air about his run in with a female individual at a bar in Sydney.

At this point, you have to ask when enough’s enough? I understand that he has a bad reputation, and I certainly understand that the allegations made against him include racism and violence against women, which are both extremely important issues to address.

I think it’s time this borderline disgusting trial by media event came to an end. Now is the time for us as music lovers, fans and (at the core of it all) a society to come together in support of music, mental health, saying no to racism, action against violence towards women and LOVE!

In the midst of it all, Sticky also announced a comeback tour. Check out the dates below, and buy tickets here. 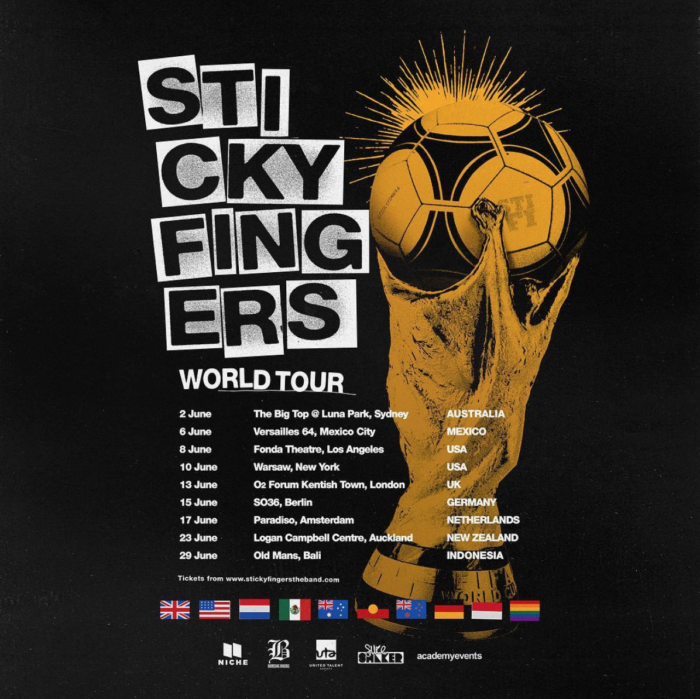 What do you think of Sti-Fi’s return? Do the band deserve a second chance, or is this public discontent justified?