Yasmin Abdel-Magied is always in the headlines. Stirring up controversy. Causing a fuss. It’s been almost a year since her infamous ANZAC day tweet, so let’s have a look back at this controversial figure, and how and why she is so divisive in the media.

Yassmin is a muslim chick born in Sudan, but who moved to Brisbane, Australia, when she was two, and has since become an Australian citizen. In her early life, Yassmin has described herself as being the “model minority”; she did well in school, went on to study Mechanical Engineering at Uni, and even started her own charity at the age of 16 called Youth Without Borders. At age 16 all I did was watch the O.C. and eat Arnott’s Scotch Fingers. She even won the Young Australian of the Year Award in 2015. This chick, like, does things. Not so controversial at this point, just seems like your regular ol’ overachieving lady.

Then she went on Q&A and had a fight with the Aussie Politician Jacqui Lambie where basically Jacqui yelled, then Yassmin went to yell, then stopped herself and gave Ms. Lambie some grade A schooling on what Sharia law actually is. However, this isn’t the part that got thrown around the media. What got thrown around was Yassmin saying that Islam is the “most feminist religion”. The fact that people used their preconceived notions of what Islam is or isn’t as vitriol for why this statement isn’t true is exactly the point Yassmin was making in her showdown with Lambie. Oh, the irony. You can watch the video below to get what I mean. The good part is from 1:00-2:45. 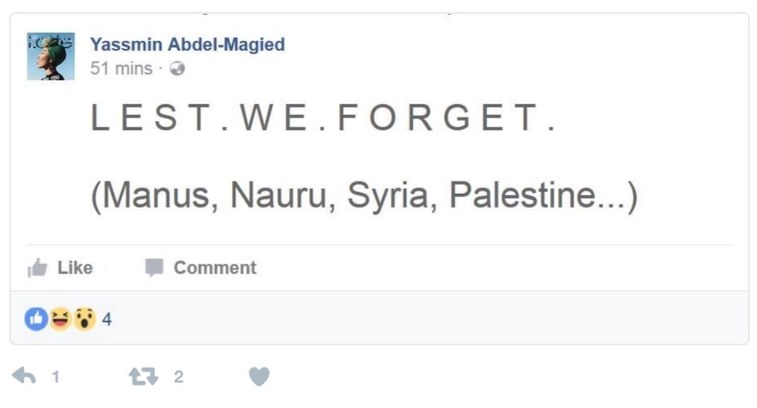 Basically the Aussie media went wild persecuting her for trying to politicize ANZAC day, and for taking the focus away from our diggers. Immigration Minister Peter Dutton called her a “disgrace” and Prime Minister Malcolm Turnbull said it was “very inappropriate”. Basically everyone had something to say, even though the post wasn’t up for very long before Yassmin changed it to just, “Lest we forget”. She also publicly apologized; however, this wasn’t enough for some, as Pauline Hanson said, “She can apologise all that she wants but I don’t believe it is done in all sincerity.”

Denied Entry into the U.S. of A

Just a couple of weeks ago, Yassmin was to speak at the PEN World Voices Festival in New York; however, upon arrival at the border she was denied entry and told to head on home. She told Channel 10’s The Project that she was subjected to very aggressive treatment, and that the officer dealing with her at one point said she would, “shoot”. The reason she was denied entry was apparently due to her not having the correct visa, but Yassmin claims she had entered the U.S. before using the same visa. It’s hard to comment here on what really happened as none of the released statements mention what visa it was that Yassmin was attempting to enter on, so I can’t look it up and tell you whether it was a single entry/multiple entry/please never ever come back here sort of Visa and through this deduce whether or not the immigration officers actions were lawful.

She did however end up speaking at the conference via Facebook live, her statements from which, regardless of the actual visa stipulations are particularly pertinent to the situation:

Then on April 19 Yassmin retweeted Sally Rugg’s (the national director of change.org) tweet that said, “What if thousands of us all tweeted ‘lest we forget (Manus)’ next week on April 25th …” and added “Do it” to her retweet. Of course this went wild with thousands of retweets both for and against the proposition.

I’ve been trying to find these actual tweets but they must have been deleted since they’re not on either of their pages, and any outside link I find to the tweets says they do not exist anymore. So basically, I think they’ve both been hit too hard by the controversy and have gone back on it, exactly like last time Yassmin tweeted about ANZAC day.

Yes, the ANZAC tweets are probably a little too political for the day of remembrance, but I think we can all agree that the Australian media has gone a bit over the top and made her out to be far more controversial than she really is. I mean, Senator Eric Abetz told her she should move to an “Arab Dictatorship”. That’s a bit over the top, don’t you think?