Kyle O’Quin from Portugal. The Man took a wee break from the band’s hectic, hectic schedule to chat to Fashion Industry Broadcast this morning. 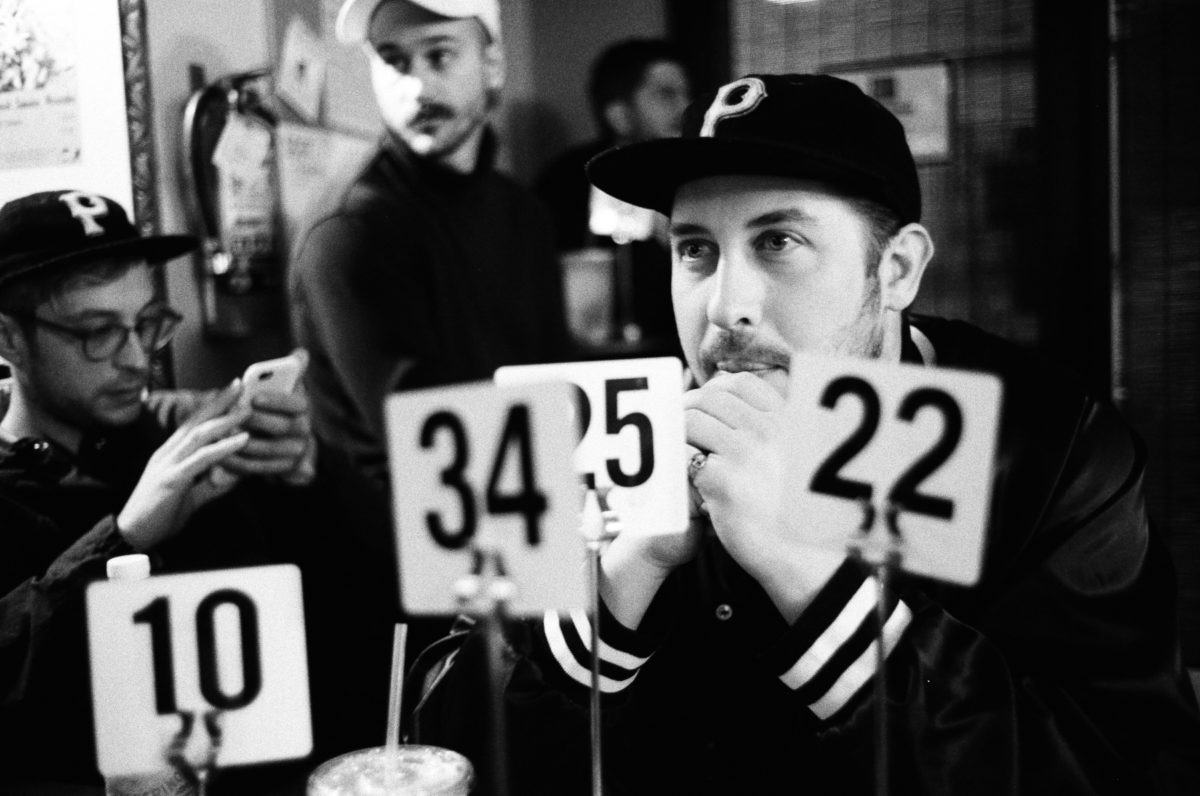 You’ve had a pretty hectic year so far, with Coachella and Groovin’ The Moo only a couple days apart, how do you handle the workload?

I look at this band like a recovering addict. It’s just one day at a time. I can get through this. Just tell me what I gotta do today.

How does Coachella Compare to Groovin’?

Coachella‘s like ridiculous ‘cos it’s down in Palm Springs, it’s the closest festival to Los Angeles so you get a looottaaa industry people. Groovin’ the Moo is more like, cool remote locations…We were talking to our agent yesterday about it, saying it’s so cool they started bringing these shows to places where people didn’t really have music before. So you get a little bit of a vibe, like people are really there having a good time hanging out and stuff. Not to knock Coachella or anything – but people from Los Angeles are absolutely spoiled and get to see anybody they want, so they don’t really care. They cross their arms like “impress me, I just saw The Rolling Stones at the Troubadour.”

What do you do right before you go onstage?

No matter the kind of a show we really don’t do anything different. We’re really just like “hey, what songs are we gonna play?” That’s usually the biggest question. I mean even before Coachella, I mean we changed out our Coachella set like 5 minutes before we went onstage. This year, we got these orchestra people to play with us and we were like writing out string parts 5 minutes before we went onstage in front of like 50 000 people. I remember looking over at the little count down clock and it literally said 4:59 and I was like “right guys, before ‘Live in the Moment’ we’re gonna have to cut”.

So no pre-concert rituals?

We usually just take a shot of whiskey and be like “alright, let’s go do it.”

Tell me about the process behind your music videos, how do you decide what’s going to go into them?

We usually just start with an idea. Either we have an idea or our director’s got an idea… We are very collaborative. We also like working with a lot of different artists, so if there’s a director we like we’re not like “hey, we want you to direct it can you this exactly?” You know when people do that to somebody, they’re like “Oh I love your painting can you paint something for my house like this exactly.” Like, geez. We like to you know, see what they bring to the table, before we throw our stuff at them.

Your ‘Feel It Still’ video is particularly politically conscious. How much do you think the current political climate influences your music?

We don’t sit there and try and write political songs in the same way we don’t try to not write songs about girls and stuff. We just try to write. Our songs aren’t really about your typical like girl stuff, they’re just really about life, our families, work, and where we come from. I think that’s just reflective of what’s around you. So I think some of the climate, like in ‘Feel It Still’ was just a reflection of what was happening around us at the time we were writing it. We had that “rebel just for kicks” line – that was one of the first lyrics we had for the record. We actually went in with Mike D from the Beastie Boys and did a song called “Rebel Just For Kicks” in 2014, and that kinda just stuck with us. The “1966” then was a reference to what the before generation went through, what our parents went through. And the “86” was a reference to the Beastie Boys “fight for your rights”, from our generation.

I was reading that you originally spent 3 years working on a record, and then you threw that out. How did that go down?

We’ve done that all the time. We’ve pretty much always recorded at least a record a year. We did a record before Evil Friends that got thrown out. I don’t think it’s ever healthy to put out everything you do. If someone’s like “hey I wrote 100 songs, do you wanna hear all 100?” I’m like “uhhh… maybe show me like, the 10 best ones.”

How do you think your old stuff compares to your new stuff?

I think it’s better. I think we’re really just trying to get better at writing songs. I think Woodstock is definitely our best album, and I think Evil Friends was the best before that. We’re actively trying to get better. It’s really important to us that the next record we make is better than the last one.

How is it that you work on getting better?

I think it’s writing 100 songs and releasing 10. That kind of attitude you know, that makes you get better. I forget who said it, but the quote that’s like “inspiration has to find you working hard”. I think there’s a lot of truth in that. You know, Beethoven wasn’t just sitting there like “oh wow! Bababa-duh da-da-da-duh that’s beautiful, Imma write that down.” That guy had a 350-page notebook they found with him when he died just filled with ideas. Just working on things and jotting down ideas, those little magic moments, they come together rather quickly as a result of all the slowly chipping away at the block.

Are you working on stuff as you’re touring?

Yeah, yeah, we’re always working on stuff. We’ve already been back in the studio, we’re always just writing songs, talking about random sort of ideas that we’ve had. We’re always writing music, and we pretty much record in between every single tour. We don’t really stop. We’re kinda workaholics. We’re still just sorta testing the waters. Our records come together very, very spontaneously.

Thanks so much for chatting to us. Hope you get to sleep or relax or take a break in some way sometime soon.

Oh we’ll be just fine. We are professionals.

If you’re keen to see Portugal. The Man in the flesh, head over to portugaltheman.com for tour dates!