Post ‘Plane Bae’-gate, digital people-watching is the cultural conversation on all of our lips, and let’s face it, it’s creepy AF and has gone way too far. 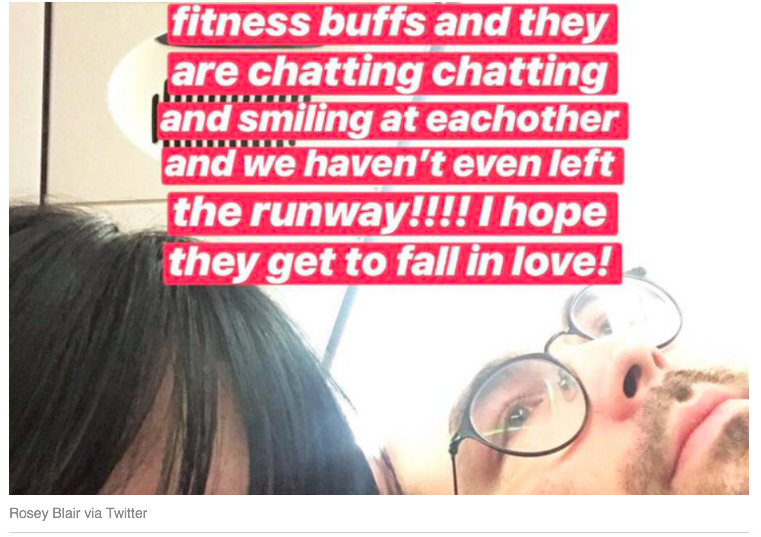 In an era of Photoshop and ‘fake news,’ society is desperate for authenticity. Just look at the popularity of reality TV, but to assume that a live-tweeted event is factual is surely a grave misjudgment. Everyone with internet access and a device is able to instantly broadcast to the world in real time. Though this creates the illusion that what they are uploading is true reality, we need to remember it’s in fact only their projection of reality, lacking context and an awareness of ethics.

The phenomenon of sharing the romantic events of strangers, think the live-tweeted: #rooftop breakup, #café breakup and more recently #Planebae, takes things to a whole new level of invasive. Take #PlaneBae: the viral Twitter thread tweeted by Rosey Blair (the initial tweet garnered over 300,000 retweets) that told the story of a sparked romance by a man and a woman who sat next to each other on a place – akin to a rom-com meet-cute. Blair recorded the duo’s conversation and took photos, which she then uploaded in a blind social media crazed flurry, seemingly unaware of any damage such an act would cause.

Having gone viral the couple were quickly identified as Euan Holden: a former footballer turned model and Helen, who has chosen to keep her surname anonymous. While Holden added “Plane Bae” to his Twitter bio and was happy to be interviewed on the Today Show, Helen declined the TV appearance and issued the following statement through her lawyer to Business Insider:

“They [fellow passengers] posted images and recordings to social media, and speculated unfairly about my private conduct.

Since then, my personal information has been widely distributed online. Strangers publicly discussed my private life based on patently false information.

I have been doxxed, shamed, insulted and harassed. Voyeurs have come looking for me online and in the real world.

I did not ask for and do not seek attention. #PlaneBae is not a romance—it is a digital-age cautionary tale about privacy, identity, ethics and consent.

Please continue to respect my privacy, and my desire to remain anonymous.”

Due to the technologizing of romance and our dependence on apps for social interaction – thank you Tinder – it’s rare to hear of couples meeting on, say public transport. Modern social etiquette while travelling is scroll on your phone and avoid all eye contact, not try out a chat up line (unless you’re swiping at the time). The prospect of love blossoming IRL is thus very exciting due to its rarity and brings up nostalgia for old-school romance, no dick pics in sight. Yet we need to remove our rose-tinted glasses when faced with supposed social media romances and dramas.

Information uploaded to social media shouldn’t be treated as journalistic documentation or fact, but a projection of the user’s own narrative onto someone else’s life – effectively false or at best inaccurate information. What makes these seemingly innocent acts of reporting harmful, is their power to turn someone’s private life into a story belonging to all and therefore open for all to comment on – cue trolling and harassment. Though understandable – we are inherently social creatures and storytellers after all – when social media posts, memes, etc., become #content and a person’s identity becomes a commodity, it’s easy to forget there’s a real person behind the thread who often hasn’t consented.

In the digital age, where the drive for content dominates, anyone can become a public figure and therefore a target for public hate. Helen of #plane bae had to leave social media as a result of the harassment she received once going viral. Her personal information and address were made public and her plane ride became a media product able to be sold as a moneymaking opportunity – the Today Show and Good Morning America jumped on it. Helen was unknowingly exploited for viral fame; fame which the thread creator Blair then used for self-promotion, revealing herself as an actor and comedian, even going as far as asking BuzzFeed for a job. Blair has since apologised for the oversharing: “The last thing I want to do is remove agency and autonomy from another woman.”

One comment in reaction to plane bae has been: we subject celebrities to this level of speculation all the time, what’s the difference? Well for starters Euan and Helen didn’t feel the need to be discreet, or expect their privacy to be invaded as celebrities do, nor do they benefit from fame and publicity in the same way as celebrities. Though Holden leapt at the chance of microfame, Helen wished only to remain anonymous, a stark reminder that the cost of 15 minutes of fame in the digital age is undeniably higher for women. It’s women who are subject to shaming, insults, threats, and harassment at the hands of digital misogyny – note it was Helen who was doxxed not Euan.

No pictures and no identifying information would have been a safer way for Blair to tell the story, especially when told without consent – but would it have gone viral? Perhaps not. Then again is posting photos of someone and going viral really worth potentially ruining their life? We need to stop reducing romance to content and restrain our thirst for likes and follows. Let’s stop personal interactions becoming commodities and pieces of entertainment – it’s dehumanising, reductive and corrodes our sense of personal boundaries.

Do you think digital people-watching has gone too far? Comment below