The less you know about Tim Wardle’s documentary, Three Identical Strangers, the better. It’s an improbable tale that starts from a supposed coincidence and develops from there through a web of unexpected twists and turns. Right in the beginning, one of its subjects confesses that “if someone had told me this story I wouldn’t believe them, but it happened to me.” It’s a bold statement to begin a film, but it’s also 100% accurate. 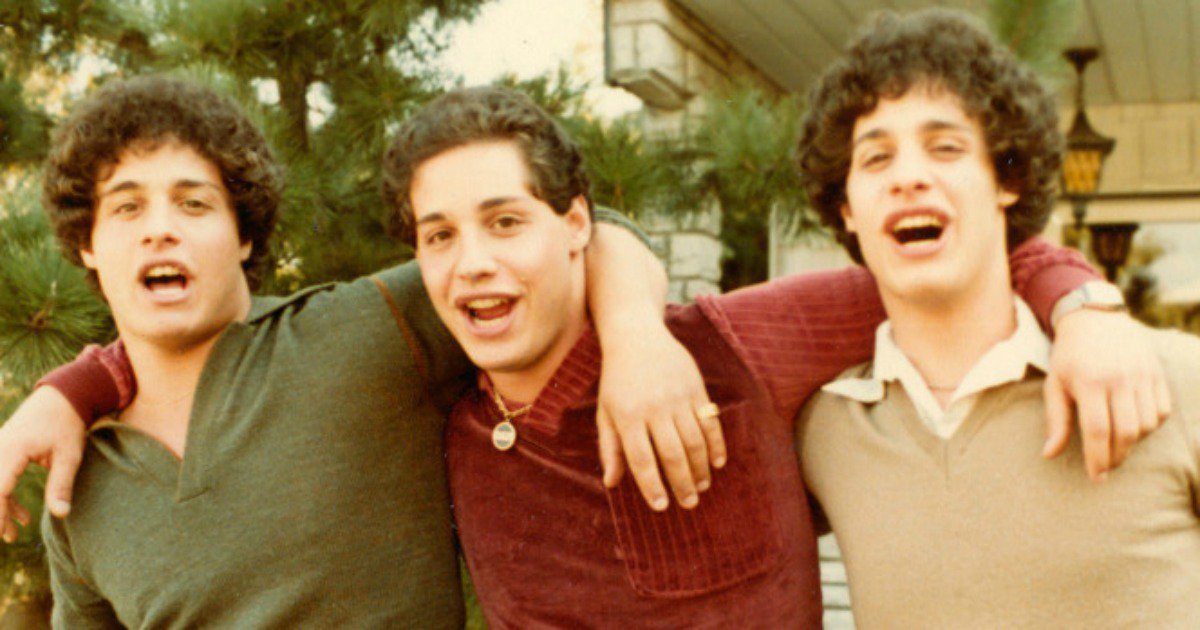 To start with the premise, and nothing else, Three Identical Strangers tells the story of three young men who discover they are identical triplets separated at birth. Eddie, Bobby, and David meet for the first time at the age of nineteen and almost instantly become a national sensation. This synopsis spoils nothing; the film opens with an account of the three brothers, like an extended prologue swinging its way through the story, with the pace and swag of a young confident go-getter (or three) about to charm their audience.

The first half is delightful and fast-paced, packed with quirky and funny moments that lull the audience into a sense of false security. It’s easy to love the three brothers; they seem to be immune to the media circus that surrounds them, feeding off the frenzy, rather than running from it. Wardle works to maintain the light-hearted high, cutting between stylised, dramatised moments (think Gus Van Sant meets Richard Linklater) and fast-paced montages of 80s pop hits as talking heads comment over and over that “life is great!”

And then someone says “I don’t know if this will turn out to be great or terrible,” and suddenly the brakes are pumped on the fun. We are sent hurtling through shocking revelation after shocking revelation. At this point, Wardle pulls some bold, stylised moves that pay off particularly well, the biggest of them a revelation montage – not unlike the ending of Usual Suspects. It’s so effective, and Wardle ends up pulling the same trick twice. And it succeeds both times.

It’s here that Three Identical Strangers faces a difficult battle. What began as a fairly straight-forward, albeit curious story begins to dip its toes in a myriad of genres. Each scene brings new elements and new themes that weren’t even hinted at in the first half. The added baggage takes us down a road that has no definitive conclusion. As two of the brothers say after being confronted with a new truth they weren’t aware of, “I have more questions than answers.”

Wardle is set for a resolution, but to do so he ends up wrapping this severely complex story with a bow of speculation. To his credit, he sells his theory masterfully, and it would be difficult to challenge him, especially because he’s a master of presenting a denouement that gives the audience a perfectly satisfying conclusion. But, after the fact, it’s evident the answer doesn’t thrill as much as the mystery of the question.

Stylistically unexpected, in a way that fits the film’s incredible story. The documentary genre does justice to the complex plot and Wardle harnesses the style to its full potential.

A series of trite and manipulative moments towards the end almost ruined it for me. But credit, where credit’s due, Three Identical Strangers is edge-of-your-seat thrilling.


API error 190: Error validating access token: The session has been invalidated because the user changed their password or Facebook has changed the session for security reasons.