In what is arguably the world’s biggest music pilgrimage, April 2019 will see 250 000 scantily dressed bohems flock to the Coachella Valley for two weekends of very modern music. The 2019 line-up sees Childish Gambino, Ariana Grande and Aussie titans Tame Impala headline each night of the hedonistic weekender. I guess a sign of the times, rock n roll has taken a back seat to forward thinking electronic music and an engulfing tide of modern rap. While sad, though not entirely a bad thing, just expect to see less non-ironic rock n roll horns this time round.

With 2019 being Coachella’s 20th anniversary, we’ve got 5 picks worth enduring the munted fairies and Californian sun for.

As an Australian, I love Tame Impala… And so should you, regardless of where you’re from. In the ten years since their inception the once three, now five, bunch of long-haired Perth ragamuffins have put their hand up as the world’s biggest band. 2019 will see Tame Impala take to the Coachella stage for the third time since 2013—many toting their headline spot on the Saturday night as a surprise pick. Kevin Parker, the mastermind behind Tame Impala’s music, has spent the interim since 2015’s Currents collaborating with pop giants like Lady Gaga, Travis Scott and Kanye West—prompting many fans to ask, when will there be new Tame Impala material?

Well announcing their headline spot via Facebook, Tame Impala offered only “New year. New shows. New Sound.” My guess is that the boys from Perth will silence the naysayers and take their psych pop into new kaleidoscopic levels. Even with the haircuts.

An enigma, penetrating and incredibly unique, Aphew Twin has been at the forefront of electronic music since picking up his first drum machine. Real name Richard James, his cacophonous textures border the extremities of IDM and the experimental. While at home in distorted dissonance, this innovator can flip on a dime, with a liquid cache of ambient works to bliss out an audience of any magnitude—thus is the scope of Aphex Twin.

In a live setting he is like no other. Can you imagine Come To Daddy on a sound system as big as Coachella’s? A prospect both mouth-watering and truly daunting. Fresh off hot 2018 material, ensure your spot in Aphex Twin’s oddities.

The last five years have seen Siberian techno giant Nina Kraviz pound our dance inclined minds into ravey synchronisation. Not scared to get over the 130bpm mark, Kraviz plays a brand of techno from the depths of Europe’s dark places. Busy on and off the stage, she runs her own label Trip; it provides an insight into the bizarre and idiosyncratic Kraviz calls a welcome home.

Her sets are for those wanting to experience something a little more obscure, something abrasive and downright heavy. Let Kraviz take both your brain and body to where it hasn’t been before.

Coachella is famous for a throwback. Recent years have seen the likes of ACDC, Guns n Roses and Radiohead take to the harrowed Californian stage. 2019 is no different, if you pull out your magnifying glass and scope out day 2 of this year’s festival, you’ll see a 90’s mainstay making their long awaited, and utterly overdue return.

Washington DC’s Deep Dish will be throwing down a set of their iconic house and deep electronica. Having reaped fame through their monumental remixes of pop icons like Madonna, Dido and Janet Jackson, the Iranian-American pair forged over a decade worth of juicy material before calling it a day in 2006.

Now internationally hailed as Dubfire and Sharam respectively, the pair are reuniting to flex out a set of flashback inducing deep house. If you raved in the late 1990’s to early 2000’s expect that dubbed out bass with soul finesse—and probably your own tears of nostalgia.

Comedian, writer/actor and headlining musician—what can’t Donald Glover do? Seriously, leave some for the rest of us mate. Glover, stage name Childish Gambino, is an undeniable fount of creativity. His 2018 single and accompanying video clip for This Is America, was a stark visual and audio reminder of his countries turbulent modern age. It not only solidified Glover’s genius but raised awareness on gun control and the Black Lives Matter movement.

Gambino will be closing your opening night with hits from critically acclaimed albums like “Awaken, My Love!” and Because the Internet. 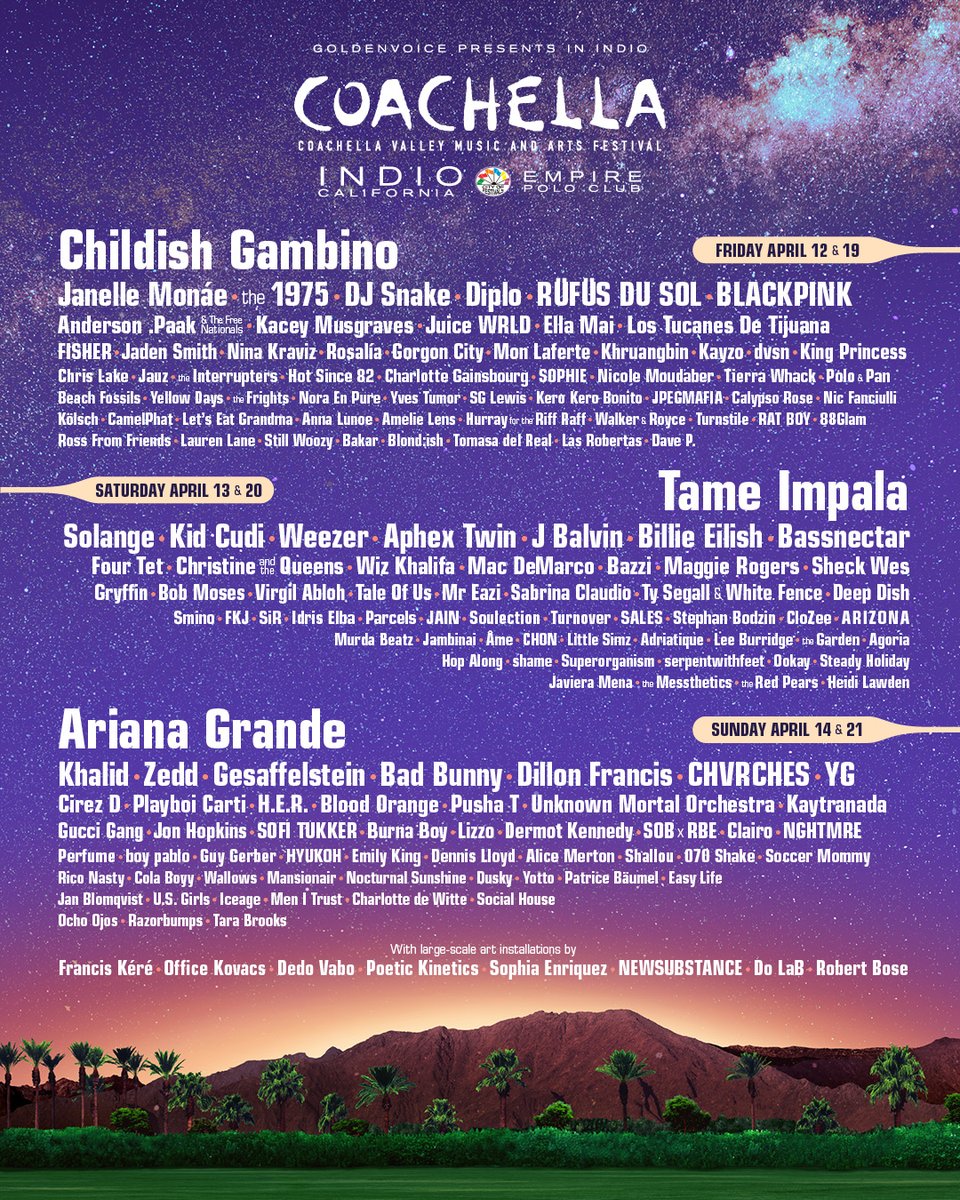 Did your faves make the cut for Coachella 2019? Let us know what you think about this year’s lineup in the comments down below.