Fashion Industry Broadcast and Style Planet TV is proud to announce our latest 11-part, hour long feature docuseries. Over the next six weeks we will be unveiling a tease on each episode. In this Netflix Original Series, presented by male supermodel David Gandy, we explore the emergence of a new kind of God, with the rise of the male Supermodel.

What’s the recipe for a male Supermodel? A dash of charm, five per cent body fat and shredded muscles, a boatload of raw sex appeal, and a decent sprinkle of really good luck.

The ensemble cast of Blue Steel have that something special that has allowed them to stand toe to toe in an industry dominated by the Glamazons of the opposite sex. They are trailblazers and trendsetters. They have both set and broken records for their sex in the business. Most of whom fell into the industry by accident, they’ve left some deep imprints along the way, altering the perception of male beauty standards.

The men depicted within this series have more than their faces on billboards, and
names sewn into the fabric of brands. They have built legends and left legacies, and it’s precisely why they deserve to be called “Supermodels” just like their famous female counterparts.

The amazing stories and trails blazed by:

In an industry where age is more than just a scary number and people really do judge by what’s on the cover, 48-year-old Dutch model Mark Vanderloo embodies what it means to be a supermodel.

Vanderloo was born in 1968 in Waddinxveen, a small town to the west of the Netherlands.

Vanderloo fell into the modelling industry quite by accident. Vanderloo had accompanied his then girlfriend to a photo shoot for a Dutch milk company and was only there to drop her off. It was at that time that luckily for us one of the photographers requested to take a few of his pictures. Weeks after the two became the healthy image of an advertising campaign of Dutch milk.

When asked if he would have imagined himself as the top model, he was he said,

“Least of anything I would figure I would be a model. It totally came as a surprise to me. I didn’t intend to do this at all as a matter of fact when I was a child my stepfather was an amateur photographer, and I never wanted him to take any pics of me ‘cause I just didn’t like it.“

If the man had to be described in one word, it would be ‘charming.’ Versace, Valentino and Calvin Klein are some of the designers who have surrendered to its charms. The Dutch model has often been called the Carrie Grant of the modelling world.

He has worked on his first international campaign with Banana Republic, though Vanderloo is still best known for his Hugo Boss black and white prints on which he has been working since 2005. 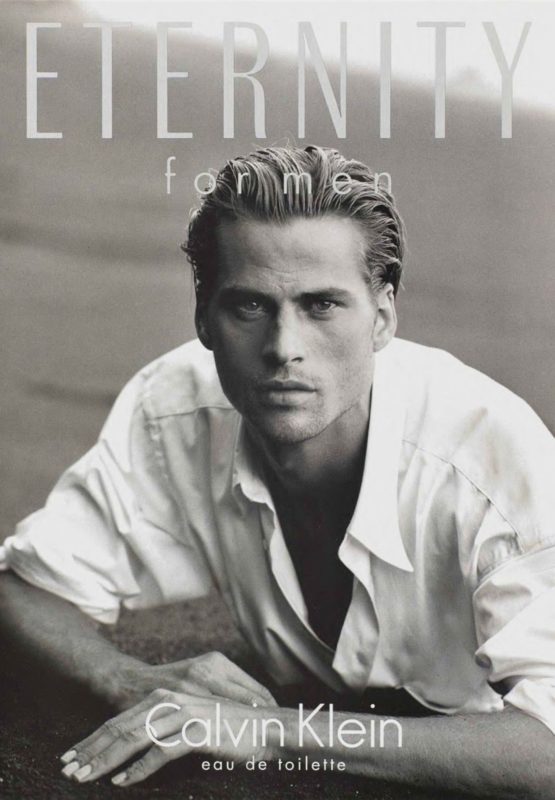 Vanderloo didn’t just enter the fashion world, he exploded all over it.

Vanderloo moved to New York in 1994 to be Calvin Klein’s Obsession model. It was after that that he first appeared the Boss’ couture and ready-to-wear lines in. VH1 awarded Mark Vanderloo Male Model of the Year in 1995. Mark was one of the first men to appear on the cover of Marie Claire in 1996. He was the number one model in the world at the age of twenty-two. The 90’s were an exciting time for Mark, there were times when he was doing as many as fifty shows every fashion week.

Even before delving into the acting world, Vanderloo managed to make an impression on the field. Derek Zoolander the fictional character who brought the profession of male modeling to the big screen was christened through inspiration from the names of Mark Vanderloo and fellow model Johnny Zander.

The profession brought Vanderloo face to face with his first wife, Esther Cañadas. The two fell in love over a four-day Model campaign with Donna Karan New York. The two were married in 1999 but sadly divorced a year later.

In more recent times, Mark Vanderloo has been named the face of Bugatti’s Ettore Bugatti Lifestyle Collection. He even appears in the Ettore Bugatti Fall-Winter 2015/2016 advertising campaign and Lookbook. He is also the brand ambassador of Andorra Sotheby’s International Realty.

Vanderloo stands as an oddity amongst most of his colleagues. In an industry where people are
willing to trample over each other to reach the next rung of the ladder, Mark Vanderloo has been known for having some great friendships within the industry. Vanderloo along with his model friends Jason Lewis, Alex Lundqvist and Keith Mallos were often called fashion’s fab four.

Vanderloo has taken tentative steps away from modelling at times appearing in pieces like Celebrity in 1998, Derek Zoolander University in 1997 and The Tale of a Fairy in 2011. Mark also made a surprising appearance in the cinematic ending of Mass Effect 3 a science fiction action role-playing third person shooter video game developed by BioWare.

The good news is he’s not even close to slowing down. When asked in a recent interview about retirement, he said,

“I attempted to retire in 1996, but that was a long time ago. I missed my stop. I am happy doing what I do, and, as long as I keep enjoying it, I intend to stick to it.