Fashion Industry Broadcast and Style Planet TV is proud to announce our latest 11-part, hour long feature docuseries. Over the next six weeks we will be unveiling a tease on each episode. In this Netflix Original Series, presented by male supermodel David Gandy, we explore the emergence of a new kind of God, with the rise of the male Supermodel.

What’s the recipe for a male Supermodel? A dash of charm, five per cent body fat and shredded muscles, a boatload of raw sex appeal, and a decent sprinkle of really good luck.

The ensemble cast of Blue Steel have that something special that has allowed them to stand toe to toe in an industry dominated by the Glamazons of the opposite sex. They are trailblazers and trendsetters. They have both set and broken records for their sex in the business. Most of whom fell into the industry by accident, they’ve left some deep imprints along the way, altering the perception of male beauty standards.

The men depicted within this series have more than their faces on billboards, and
names sewn into the fabric of brands. They have built legends and left legacies, and it’s precisely why they deserve to be called “Supermodels” just like their famous female counterparts.

The amazing stories and trails blazed by:

Tyson Beckford is a name almost synonymous with the male fashion industry today. It is however important to note that he had to break a few glass ceilings in his rise to the top. He is noted as the first African-American male supermodel credited with opening the door for other people of men of colour to enter into the industry.

Tyson was first spotted by talent scout Jeff Jones and was asked to pose for the Hip Hop Magazine, The Source in 1992. His first interaction with the industry was a bit before that through his mother, a fashion model herself for a while who dragged her son with her on her runway excursions for a time. It was his campaign with international fashion giant Ralph Lauren’s Polo line of male sportswear however, that blasted him into the fashion world.

When famed lensman Bruce Weber shot Tyson in the Polo Sport campaign for Ralph Lauren, Beckford’s career went into hyperspace which Bruce credited to his “all-American look with a dramatic edge.”

Beckford’s looks have been scrutinised in an industry where appearances clearly matter. He has often voiced his glee at the fact his exotic eyes and high cheekbones that were mocked quite severely in his school days, are actually paying the bills and more really well today. His unique look results from a mix of a Jamaican, Panamanian and Chinese heritage.

Beckford has an array of accolades under his belt. He appeared in the fashion section of the New York Times, in Gentleman’s Quarterly and in the Mark & Spencer Catalogue. In 1993 Beckford became the first African-American man to wear Ralph Lauren clothing in the company’s advertising.

He was named the Model of the Year by VH1 1995 and was also ranked at 38th on the list of 40 hotties of the 90’s by them. He was named one of People magazine’s 50 Most Beautiful in the World in 1995. He has worked with names like Gucci, Tommy Hilfiger, Guess and Calvin Klein.

Beckford is aware of the role he has played in paving the path for other men of colour in the industry. He even went so far as to turn down a chance at walking the Milan fashion show one year as a result of being the only African American man invited from the United States. He revealed the reason in an interview with Vibe in 1995 saying, “There are so many African-American and African men who are trying to get jobs, and they weren’t giving the jobs to them…. I’m not the only brother out here trying to make it. So, I didn’t go.”

Tyson has worked his way up to the $14 Million of his Net worth today. He has been extremely active is giving back to society and creating awareness for various causes he believes in.

In the December of 2005 he showed his support for the Gay Men’s Health Crisis at the ‘Move Against AIDS danceathon’. He collaborated with the National RESPECT Campaign, for which he recorded a message against domestic violence

He’s an ambassador for the non-profit Kick4Life which is an organisation that uses the power of soccer to engage vulnerable youth in holistic care and support in Africa.

In 2013 he participated in a risqué́ photoshoot in the July issue of British Cosmopolitan along with celebrities like Adam Levine and Jesse Metcalfe in order to raise awareness of male cancers for Cancer Research U.K. 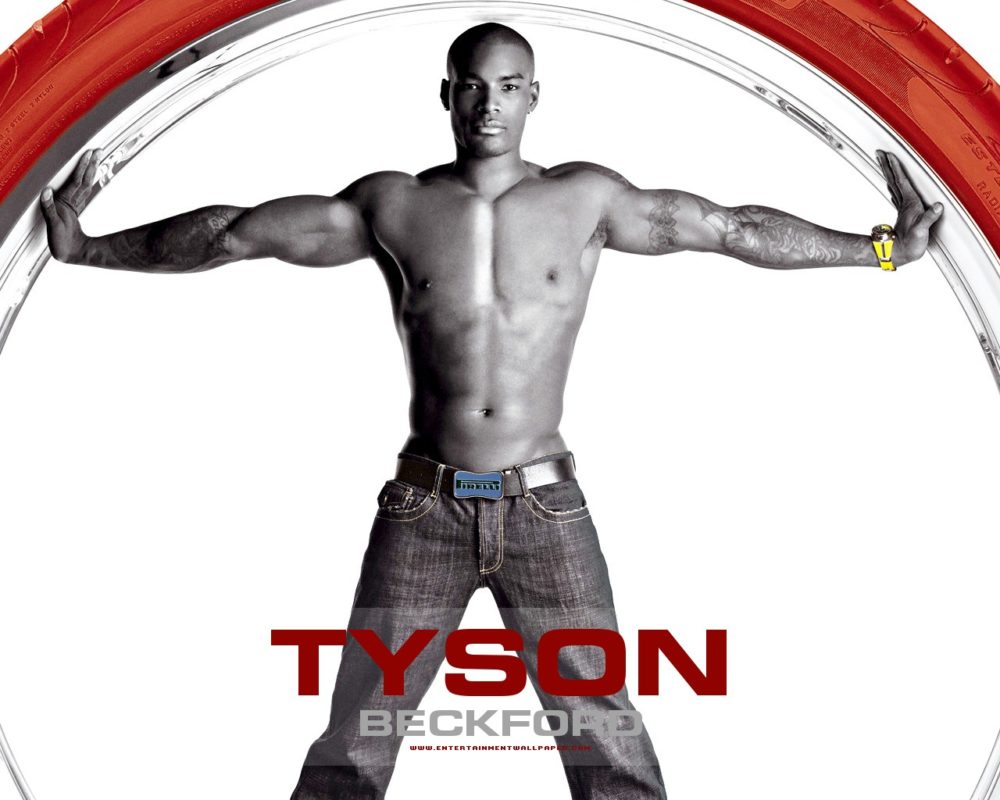 Beckford was the host at the 4th Fashion for Charity Gala in 2015 an event to help raise funds and awareness to aid victims of Domestic Violence & Human Trafficking and bring awareness to the non-profit organization City Girl Beauty Project.

Beckford made the transition from modelling gradually, first by appearing in videos like Toni Braxton’s “Breathe Again” and “Unbreak My Heart” and can even be seen in Britney Spear’s Toxic.

Beckford co-hosted the modelling contest ‘Make Me a Supermodel’ on the television channel Bravo with fellow supermodel Niki Taylor. He also judged and mentored the contestants of the first few episodes of the Australian version of the show. He was a guest judge on both America’s Next Top Model and Project Runway. In 2003, he appeared on the ABC network’s celebrity reality game show I’m a Celebrity… Get Me Out of Here. He has appeared in films like Drift: The Sideways Craze, Zoolander, Addicted, Chocolate City Biker Boyz, Gas, Hotel California and a few others. He recently did a cameo appearance on a New Original Sketch Comedy Series: Netflix Presents: ‘The Characters’.

Tyson is now officially semi-retired from the modelling world. We aren’t through with him yet though and are happy to report that he has been declared the official spokesperson of ‘Tybaltevan’ for the fifth edition of the international song contest this November so there’s definitely more to come.