With Coachella Music Festival firing up in California, we took the chance to see which of the best and brightest festivals are showing up on the green radar.

Help keep Coachella green with new initiatives like the Camping Donation Center, and returning favorites from @globalinheritance like the Energy Playground, POSTed Studio and more ? ?: @sofitukker

There are a whole host of festivals which are committed to green awareness; today, we are merely skimming the surface. Below we’ve listed some of the largest festivals world-wide that are inventing and implementing the coolest ideas. It is almost redundant now to mention that such-and-such festival has dry-composting toilets or low-flow showers. Although we applaud these, our selection has more been based on the most innovative ideas and on the most important festivals.

Coachella Festival is a haven for eco-friendly practises in the best way imaginable! One example of this is that carpooling not only gives you the feel-good fuzzies, but also a chance to win big. Carpooling participants (four or more per car) are entered into a draw to win lifetime VIP access to Coachella. And who knows, you might just make new friends at the same time. Another bonus is that Coachella is home to the hippest playground on the planet. Frolic on re-engineered playground equipment guilt-free. Have a blast while blasting up some serious energy which converts to electricity and helps power the festival.

Splendour in the Grass – Australia

Splendour in the Grass in tourist hub Byron Bay, does Australia proud with their ultimate green approach. Case-in-point –for just $3 extra per Splendour ticket you can give back to Australian renewable energy projects. Another simple but sweet feature is that Camp Zero Footprint gives campers the best spots in exchange for eco-loyalty. These campers need to maintain clean camp sites, get involved in tree-planting sessions and offset their travel emissions to the festival. If these rules are ignored, Splendour’s Eco Cops may just fine you. You’ve been warned…

Head over to Glastonbury’s mega fun-fest with a clean conscience. Glastonbury, the biggest festival in the UK, donates millions of pounds each year to Greenpeace, Oxfam and WaterAid, setting a stellar example for less proactive events. The festival also provides free shuttles and has set up extensive solar energy on-site. A quirky invention – The “Pee-Power Project”, run by Bristol University & UWE, creates electricity from urine on site. Products such as cutlery and dishes must be biodegradable. Oh, and did I forget that the glitter used on stage must be biodegradable, helping you to look and feel like a unicorn at the same time!

Tomorrowland is held in the town with the most appropriate name – Boom! Apart from being an electro extravaganza, this event boasts a Recycle Club. Clubbers get a recycle kit upon arrival with recyclable bags to sort rubbish and includes flower seeds as an extra special gift. The Recycle Clubhouse is also equipped with a 3D-printer that makes items from used plastics. 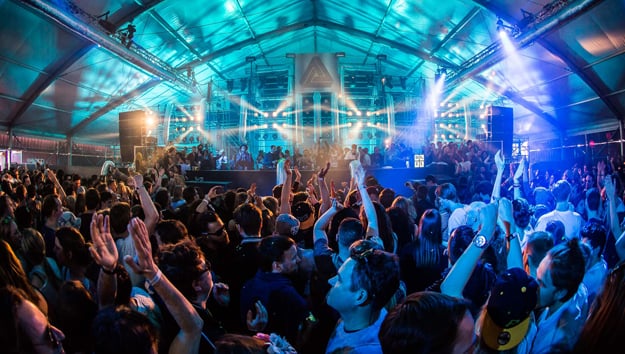 DGTL is one of the most committed eco-electro festivals on the planet. This year it will pilot Calix, a 3D-printed cup holder for festival-goers. In 2017, visitors donated their time (and breath) to help grow algae that was fixed above them in a special experiment. The participants were rewarded with a fresh algae shot or smoothie. The same year, DGTL rewarded particularly eco-friendly visitors with “The Eco Coin” – the world’s first ecological currency. Their ECOs unlocked special rewards such as free food, music-downloads and discounts. And if you haven’t heard enough about urine – last year DGTL even converted urine into drinking water in a 40ft shipping container.

Music festivals are an awesome way to put some kick into your free time by meeting new people and diving into music styles you’ve never even heard of. However, often these “fun-for-alls” can wreak havoc on the local landscape. In fact, a British study has found that festivals are responsible for 43 percent of carbon emissions of the entire music industry. Therefore, it’s so important for big festivals like Coachella and Splendour to take up the beacon as green warriors. The quirky and innovative ideas explored by festivals are an important step in improving eco-awareness. As long as we don’t get too complacent, the sky, or rather the planet, is the limit!

Let us know of any green initiatives you’ve seen, or been a part of, at music festivals.