While the world was zeroing in on the excitement of seeing Harry Styles on the big screen (!), singing (!!) and being Elvis (!!!), Baz Luhrmann and his team found their perfect actor.

The casting of relatively unknown actor Austin Butler as Elvis came as a surprise to most; the star power of a Styles-led movie musical would have instantly electrified audiences across the globe and made Luhrmann millions. However, in a statement to Deadline Hollywood, Luhrmann had this to say on his casting choice:

“Through a journey of extensive screen testing and music and performance workshops, I knew unequivocally that I had found someone who could embody the spirit of one of the world’s most iconic musical figures.”

So, who is Austin Butler, aside from being the perfect embodiment of Elvis?

If you watched Disney Channel growing up, you may remember a blonder version of him from guest roles on iCarly, Zoey 101, Hannah Montana, Drake & Josh, Wizards of Waverley Place, and a slightly larger role in the High School Musical spin-off Sharpay’s Fabulous Adventure. If you watched The Iceman Cometh on Broadway last year, you would be familiar with his work. He is also somewhat known for being Vanessa Hudgens’ boyfriend, and for being attractive.

Twitter seemed to remember his Disney days, and the fact that he’s good-looking. 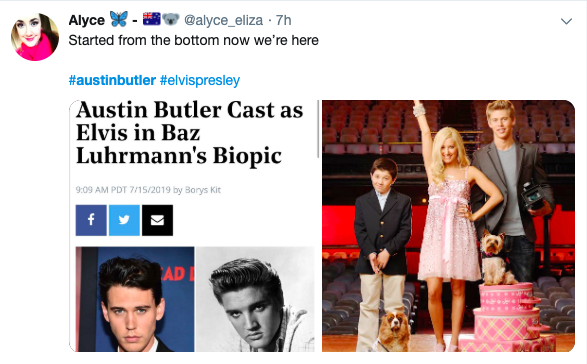 At least now we can look forward to a different type of dialogue surrounding the casting instead of constantly hearing: ‘How Good Will Harry Be?’ I guess we’ll all have to see for ourselves.